If Chris Eubank Jr is above 158.5, fight is off against Conor Benn

By Barry Holbrook: Trainer Tony Simms says the maximum limit for the weigh-in for the Chris Eubank Jr vs. Conor Benn is 158.5 lbs for their 157-lb catchweight fight on October 8th.

It would be the same thing if Benn were to come in heavier than that weight as well, but given that he’s coming up in weight from the welterweight division, he’s not expected to struggle with making the 157-lb catchweight.

Simms also said there’s a rehydration clause for the Eubank Jr-Benn contract, but he didn’t want to discuss that.

Depending on how low that number is, it’s going to put Eubank Jr (32-2, 23 KOs) in a tough spot where he’ll need to withhold fluids overnight to make sure he doesn’t come in over the limit during the secondary weigh-in on the day of the fight.

If Eubank Jr is lucky, the rehydration clause will have a higher number of 170. But it’s more likely to be set at 167 lbs. That weight will still be difficult for Eubank Jr to make on the day of the fight, but he’s going to have to deal with it.

“There’s a massive financial penalty, and if he comes in over 158.5 and then the fight will be called off,” said Tony Simms to Secondsout about Chris Eubank Jr.

“The rehydration clause, I’m not sure we can talk about it because that’s a matter for behind the scenes. We were comfortable with him coming in at 157. Conor will come in at 154 or 155. So there will be a couple of pounds in that.

“There have been a few complications trying to get the contract over the line and eventually got done,” said Simms. 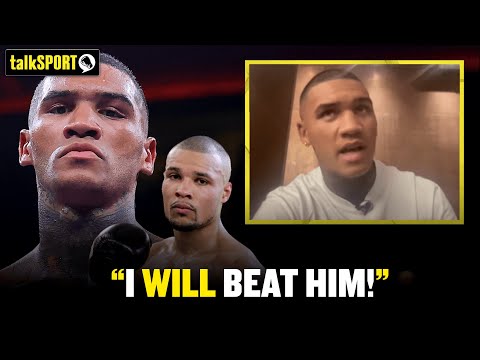 Teofimo Lopez will “be unstoppable at 140” says Teo Sr »