By Huck Allen: Deontay Wilder will be battling the dangerous puncher Robert Helenius on October 15th in his comeback fight in a WBC heavyweight title eliminator on FOX Sports pay-per-view at the Barclays Center in Brooklyn, New York.

Former WBC heavyweight champion Wilder (42-2-1, 41 KOs) has decided not to play it safe for his return fight, as he’s picked one of the hardest hitting fighters in the division in 6’6″ Helenius for their 12-round clash in the main event.

The winner of the Wilder vs. Helenius fight will be the WBC mandatory to champion Tyson Fury, who currently says he’s retired.

“I’m very excited because I’m going back home because that’s where I’ve had some of my best electrifying knockouts,” said Deontay Wilder to PBC Podcast about going back to the Barclays Center in Brooklyn.

“I’m looking forward to adding to that. I’m very excited at coming back to Brooklyn to continue to bring my greatness to the world.

“It’s going to be an interesting fight for me and Robert. We know each other in the ring, and we know what we’re both capable of doing. So, I’m going to need to come out with something different that he’s never seen before and bring it to him that way.

“He’s probably thinking the same thing. So, it’s going to be an interesting fight while it lasts. I’m looking forward to a great challenge. A lot of people are going to get their money’s worth. They’re going to get a great show of my comeback fight.

“He’s [Helenius] has been doing great. He’s on a winning streak right now. He’s got to feel good about that and feel very confident in himself about that. I’m excited for him and I’m excited about going to Brooklyn for this one.

“Robert has been to my house, so we’re pretty cool and his trainer. It’s not going to be a fight where you’ve got two enemies going against each other,” said Deontay. 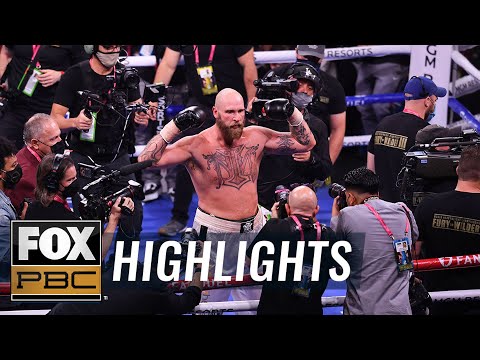 Caleb Plant vs. Anthony Dirrell on Oct.15th at the Barclays Center in Brooklyn »