Boxing superstar, Ryan Garcia (23-0, 19 KOs), put the division on notice by delivering a spectacular performance against former two-time world champion Javier “El Abejon” Fortuna (37-4-1, 26 KOs) in front of a star-studded audience at Los Angeles’ Crypto.com Arena. The night’s main attraction featured non-stop action and celeb appearances by actors Michael B. Jordan, Danny Trejo, television personality Mario Lopez, and the LA Rams’ Sean McVay and Aron Donald. The action started with Fortuna taking the initiative and going after Ryan, with the latter utilizing his jab and long punches. Garcia caught Fortuna with a body shot, bringing him down in the fourth round. Fortuna got dropped again in the fifth round and finally got stopped by the ref in the sixth round with a time 0:27 via knockout.

“I want to thank God first and foremost,” said Ryan Garcia. “I know that I performed well for myself. I was crisp, sharp and I stayed in my truth. I didn’t do anything crazy. I know how good of a fighter I am, I just had to put it all together, just like tonight. Fortuna hit hard, he has a hard fist. Like I said when I fight stronger opponents, I box better. Yes, I caught him with a body shot. He thought I was going for the head but I switched it on him. I felt he was going to throw the Luke Campbell shot [the shot that dropped Ryan against Campbell]. I feel like everyone is going to try to hit me with that shot. I hit hard so it doesn’t take much to hurt someone.”

“It felt like [I made] a statement to come back to the timeline I was at. Mental health is a time to reflect on yourself and get better for the future. That’s not weakness, that’s strength! That’s courage! You saw me today when I stepped in the ring. That’s nothing but courage and skill.”

“I felt way better at this weight. I’m not going down to 135 for nothing. But I will fight Tank next if he wants it at 140. I’ll make sure to record all the negotiations so you can’t say I was ducking. I want that fight because it’s going to give me the respect I deserve. I’m never afraid. I have a spirit of competition in me and you’re going to see that come out when I fight Tank and whoop his ass.”

In the co-main event of the night, Orange County’s fan favorite, Alexis “Lex” Rocha (20-1, 13 KOs) of Santa Ana, CA, defeated Luis Veron (19-5-2, 9 KOs) of Buenos Aires, Arg. to capture the NABO Welterweight Title in a 10-round fight. Both fighters were willing to make calculated moves as they tried to land effective punches. Rocha landing the more precise shots took the scorecards with 100-90, 100-90 and 99-91 winning via unanimous decision.

“My strategy for this fight was to go in there and break him down,” said Alexis Rocha. “I knew he was going to be a durable fighter; he gets hit and stays there. Once that happened in the fight I knew he was just going to survive. Training is always great with my team, they’re always pushing me. I went there with a game plan and I followed it the best I could. It feels good fighting in front of a big crowd here at the Crypto Arena. Having my Santa Ana crowd behind me, it made me feel good. Onto the next level now.” 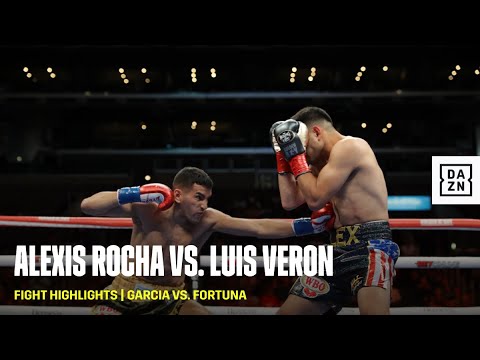 “My strategy was to stay tight and keep the pressure on him,” said Lamont Roach Jr. “We knew it would break him down. He was a tall and lanky fighter so we were watching out for the looping shots. He had a nice 1-2, the ones that landed I let him. He was really good defensively, but if we would’ve kept the punch output higher I would have stopped him. He was very evasive.”

“He’s an amazing fighter, extremely intelligent,” said Angel Rodriguez. “He knows how to work his rival and always keep his composure even when getting hit. In these events it’s them who decide who wins and as an athlete I’d fight him again. We tried to win but he simply came with better preparation and strategy, that’s why he took the victory.” 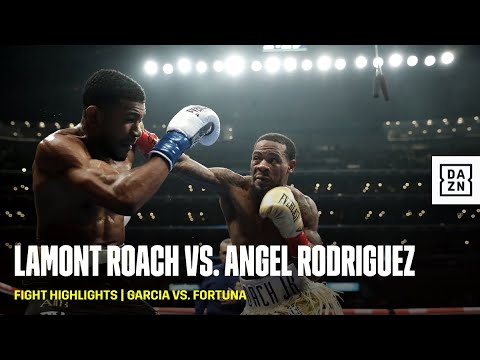 Opening up the live stream on DAZN, Rialto’s Ricardo “El Nino” Sandoval (20-2, 15 KOs) faced undefeated fighter David “Medallita” Jimenez (12-0, 9 KOs) of Cartago, CRI, in a 12-round fight for the WBA Flyweight Title Eliminator. In the 11th round, Sandoval was shaken and hit the canvas; after he got back up he was literally saved by the bell as Jimenez launched an attack to try to finish the fight. The fighters engaged in a crowd pleasing final round with the victory awarded to David Jimenez by the judges via majority decision with scores of 112-114, 112-114, and 113-113.

“I’m happy and grateful for this new victory,” said David Jimenez. “We executed our game plan perfectly. In the first 6 rounds it was a lot of movement and aiming. After the 6th round I started to take advantage. My rival was very tough and stubborn. He has a lot ahead of him. I’m going to go home after this victory and spend time with my family then get back into the gym.”

“I felt like I was boxing him correctly so I feel very good,” said Ricardo Sandoval. “I was also countering him downstairs and upstairs. But you know these things happen. I felt like I won the fight. The people won tonight and got one hell of a fight.”

The Golden Boy Fight Night: Garcia vs. Fortuna Prelims portion of the night was headlined by Oscar Collazo (5-0, 3 KOs) of Villalba, PR, taking on Victorio Saludar (21-6, 11 KOs) in a 12-round fight for the WBA Minimumweight Title Eliminator. The battle was close as both fighters got a knock-down in the seventh round, but Collazo took the edge by putting the pressure and coming forward. Collazo won via unanimous decision with scores of 118-112, 116-110, and 116-110. 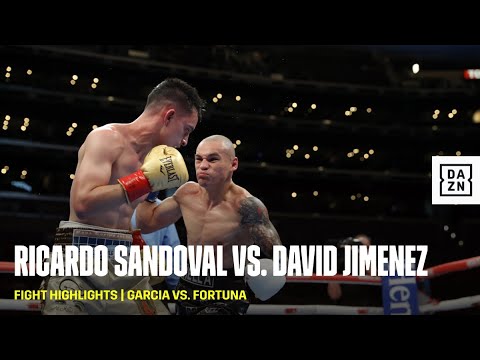 “It was a tough fight. I had to use my whole toolbox,” said Oscar Collazo. “My opponent was powerful and experienced; he’s a veteran in the sport. But, thanks to my corner, I got in the ring and fought round by round. A world championship is next. I want to be a champion.”

Next, Diego De La Hoya (23-1, 11 KOs) of Mexicali, MX, dominates Enrique Bernache (24-14, 12 KOs) of Guadalajara, MX, early in a scheduled 10-round featherweight fight by throwing powerful counters. Although Bernache was slipping a lot during the fight, it didn’t stop Diego from keeping him at a distance and destroying him in the fourth round at the 2:51 marker via knockout.

“I felt thrilled to be back, said Diego De La Hoya. “I haven’t fought in two years, so I felt great. My opponent was tough. I’ll probably fight again in September. Hopefully, I will fight for a championship soon.”

Opening the night, Los Angeles’ Miguel Gaona (3-0, 2 KOs) defeats Abdiel Padilla (1-3, 1 KO) of Caguas, PR, dominantly via KO in the first round of a scheduled 4-round super lightweight fight. Gaona started slow and cautious at the beginning of the round, only to finish his opponent with a body shot at the end of the round.

Garcia vs. Fortuna was a 12-round super lightweight fight presented by Golden Boy in association with Sampson Boxing. The event was sponsored by Hennessy “Never Stop. Never Settle,” “BetOnline – Your Online Sportsbook Experts, Uncle Bud’s Hemp & CBD – Relax, Recover, Reset, Masculen “It’s a Mentality. Don’t be a man, be the man,” and Gym Shark. The fight will take place on Saturday, July 16 at Los Angeles’ Crypto.com Arena and will be streamed live worldwide on DAZN. 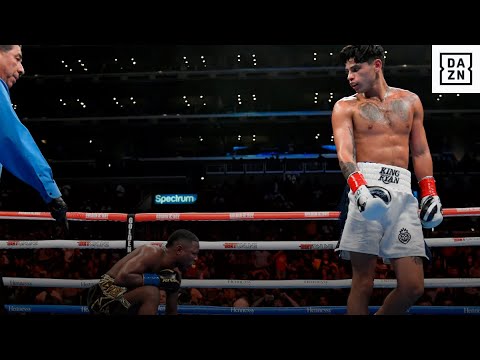 Rodriguez vs. Gonzalez on Sept. 17 LIVE on DAZN »