By Allan Fox: Ryan Garcia is predicting a knockout of  Javier Fortuna this Saturday night in their headliner live on DAZN at the Crypto Arena in Los Angeles.

This could be the unbeaten #2 WBC lightweight contender Garcia’s last fight before he challenges WBA ‘regular’ 135-lb champion Gervonta ‘Tank’ Davis this December.

The 23-year-old Ryan cannot afford to lose to Fortuna (37-3-1, 26 KOs) if he wants to stay in the running for a massive-money fight against Tank Davis on Showtime PPV.

Fortuna, 33, wants to knockout the now heavily tattooed Ryan on Saturday night, and it’s going to be interesting to see if he can accomplish that feat. If so, it’s going to be difficult for Ryan to come back from that loss.

“I can’t wait for you guys to see my fight this Saturday. I’m inspired to do something amazing,” said Ryan Garcia on social media about his fight against Javier Fortuna on DAZN.

“How many rounds for Saturday? If I could make an honest prediction. There are many outcomes that could happen in this fight. There’s a high chance this man [Fortuna] gets knocked out, and if you’re looking for an exciting punch that blows you away watch the fight on Saturday.

“There are two options for him to end up at. He either ends up on his face or his back. Those are the only two options. So I’ll be looking forward to it. He said he’s going to rip my heart out and split my face.

“I definitely can’t go in there and take him lightly if he wants to do some crazy things. But he might walk into the wrong.

“My deepest fear is that I don’t accomplish what I want to accomplish in life. But then again, I don’t have fear. I try to live in truth. I try to see things, and try to accept what I can’t control and what I can control, and then let it fly.

“I’m going to be shooting a movie soon, probably after my fight in December. The next year, I’ll probably start shooting. It would probably be an uppercut. That’s my second favorite punch.

“I’m going to go win my fight [with Fortuna]. I’ll go live after my fight, and I’ll talk to you guys after I knock this dude out

“I’m going to do what I do, and I’m excited. This camp has been going great, guys. I’m so happy. It couldn’t have gone better. It’s been smooth. I’m in shape, and I’m not coming from a layoff anymore.

“I’m just continuing my reflexes and my IQ. Everything is better because I’ve been doing it constantly, so I’m happy where I’m at. Thank you, Shakur. You’re also a great fighter, and I’m happy for all your success and winning and becoming a champion.

“Who is my dream opponent? I would say Canelo, Floyd Mayweather, and Manny Pacquiao. Those are the three people that I would want to fight,” said Ryan Garcia. 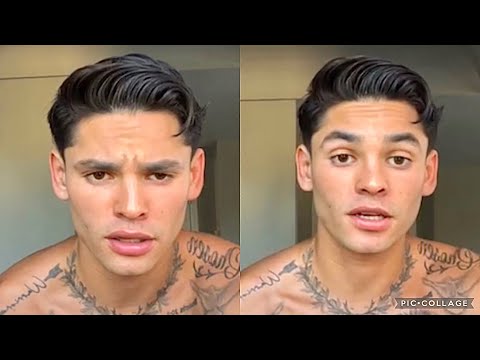 
« Will Any of The Young Talents Be Champs?

Chris Colbert vs. Frank Martin fight being set up by Errol Spence »