Chris Colbert vs. Frank Martin fight being set up by Errol Spence

By Chris Williams: Errol Spence Jr is trying to set up a fight between his fighter Frank Martin and super featherweight Chris Colbert.

When Spence asked Colbert, 25, on Twitter on Sunday if he’d be interested in facing Martin, saying, “Let’s make it happen.”

Of course, Colbert’s promoters may have something to say about him taking on a bigger, stronger fighter like Frank Martin in a fight weight class in which he’s never competed.

Given that defeat to Garcia, it would be reckless for Colbert to move up to 135 to take on Frank Martin in his next fight. In this writer’s view, Colbert is arguably far more talented than Frank Martin, and he would beat the brakes off him if the two were the same size.

Spence could get Martin beat if he mixes it up with Colbert or some of the talented 135-pounders. Martin did NOT look good in his win over Jackson Marinez last Saturday night.

With Colbert’s talent, he could be a star if he moved down to featherweight, which is where he arguably should be competing.

Colbert is too small to be fighting at super featherweight [130], and we saw that in his loss against Hector Luis Garcia, who looked like a full-fledged light-welterweight on the night of their fight last February.

Bet I’m have a talk with your people lol https://t.co/3kAGN6ryh3

If you’re Colbert’s management, you can’t let him fight a big lightweight like Frank Martin. As I said, there’s too much of a size differential between the two.

Martin looks like a light welterweight when filled out, whereas the thin 5’8″ Colbert has a featherweight frame. You got to commend Colbert for competing at 130 because he needs to be at 126, where he started his career.

Spence is working hard trying to hustle fights for his fighter Frank Martin. Besides Colbert, Spence called out Rolando ‘Rolly’ Romero to try and spike interest with him in a battle against Frank Martin. Like Colbert, Rolly is coming off a loss as well.

If Spence wants to hustle fights for Frank Martin, he needs to focus on realistic targets from this bunch of fighters:

Frank Martin would arguably lose to most of those fighters on the above list because they’re more talented than him. 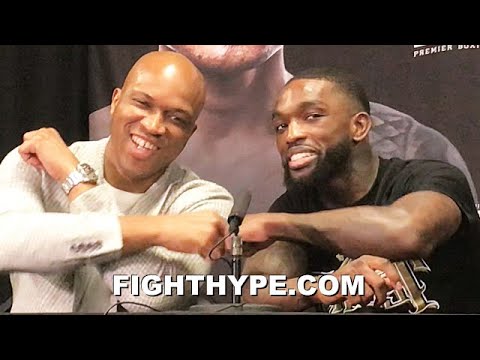