By Craig Daly: Mairis Briedis (29-2, 20 KOs) says he wants a rematch after losing his IBF cruiserweight title to #3 contender Jai Opetaia (22-0, 17 KOs) by a grueling 12-round unanimous decision on Saturday night at the Gold Coast Convention Centre in Queensland, Australia.

A rematch between the two fighters will likely need to wait for 8 to 12 months, given the broken jaw Opetaia suffered during the fight. Opetaia fought with a jaw injury from the second round but did an excellent job of boxing to avoid getting stopped. The 37-year-old Briedis suffered a broken nose in the second round.

Opetaia’s movement saved him in rounds six through twelve because he was taking a shellacking from Briedis in getting hit uppercuts over and over.

Briedis took advantage of the Opetaia’s inability to stop block or get out of the way of his uppercuts, so kept hitting him with those shots one after another. These were huge uppercuts, and it was surprising that Opetaia was able to take them without being stopped.

The injury will take time for Opetaia to heal, and his management probably won’t be keen to throw him back in with the heavy-handed Briedis in his first fight back in 2023.

The fight was a battle of two halves. While the 27-year-old Opetaia controlled the action in the first six rounds, Briedis came storming back in the last six to dominate. In the end, the judges gave Opetaia the victory by the scores

The score that best matched the fight was the 115-113 margin turned in by Katsuhiko Nakamura. Opetaia deserved the win, but it was a razor-close fight and definitely not won by the margin of 8-4 that two of the judges scored it. 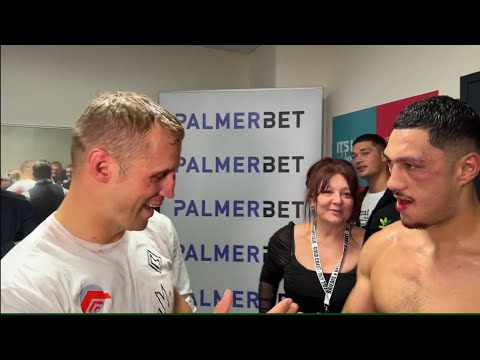 “Congratulations to the champion, but I hope I come back one more time,” said Briedis after the fight when he visited the victorious Jai Opetaia in his locker room.

“Second round? No, twelfth round,” said Briedis when asked if he was aware that he’d broken Opetaia’s jaw in round two. “I think in the eleventh. In the second round? S***, I don’t know.

“Yeah, but I broke my nose in the second round. It was the same. 1-1. I was sick for the last four days, and this was a problem for me. But I like it because I come back one more time. We make a rematch. A-okay,” said Briedis.

The young 27-year-old southpaw Jai Opetaia boxed well throughout the contest, jabbing the older fighter Briedis, and catching him when he would come in to try and mix it up.

In the last six rounds, the pace of the fight caught up to Opetaia, as he faded and was beaten up by Briedis. As the fight ended, Briedis was in control of the contest and dishing out all the punishment.

You can’t blame Opetaia for struggling in the second half because he was fighting with a broken jaw. Also, Opetaia had never gone 12 rounds during his seven-year professional career, so he hadn’t had fights for him to work on his stamina to build it up.

“I didn’t know it was broken until the 11th round when you can evidently see that something was really amiss with it,” Opetaia’s trainer Mark Wilson said to Foxsports.com.au after the bout.

“I thought, ‘We got through that, we’ve only got one to go. Run. Run.’ I believe we were two or three or four rounds up, I thought. We were starting to maybe lose a couple late. I said, ‘Just move, mate. We’ve got to move. Don’t do anything silly. Move, move.’ We got through there.”

Both fighters showed tremendous heart by fighting through their injuries, and it’s a testament to their fortitude that they could endure the pain.


« Canelo to take out his frustration on Golovkin

Joshua declines Fury’s offer to train him: “I wouldn’t take his help” »