This should be an exciting fight for as long as it lasts, as both fighters are all-action boxer/punchers. Unfortunately, both are coming off disappointing losses in their last fights and need a victory to stay relevant.

Pedraza has the boxing skills to defeat Commey, but it’ll depend on if he can stay out of the way of his big shots. Commey is a huge puncher, and he can knockout Pedraza if he nailed him cleanly.

It would be better for Commey & Pedraza to return to the 135-lb divisions, as neither matches up well against the top guys in the 140-lb weight class.

However, with former undisputed light welterweight champion Josh Taylor expected to move up in weight in 2023, he’ll be vacating his IBF & WBO 140lb titles, allowing the Pedraza-Commey winner to challenge for one of them potentially.

The 35-year-old former IBF lightweight champion Commey is coming off a 12-round unanimous decision defeat against Vasyl Lomachenko last December.

Commey was fortunate not to be knocked out in that fight, considering Lomachenko had him badly hurt during one instance and chose to back off rather than finish him. Lomachenko was criticized afterward by some boxing fans for him motioning to the referee to step in and halt the fight.

In the chief support bout on the Pedraza vs. Commey card, unbeaten heavyweight prospect Jared Anderson (11-0, 11 KOs) will be fighting Miljan Rovcanin in a 10-round bout.

The 22-year-old Anderson is someone that Tyson Fury is high on, believing him capable of winning a world title someday. Anderson, 6’4″, has the size and power to win a world title, but only time will tell.

Anderson has recent knockout wins over Oleksandr Teslenko, Vladimir Tereshkin, Jeremiah Karpency, and Kingsley Ibeh. Jared has got the talent to go far in the division, but he needs to be matched against better opposition for him to develop properly. 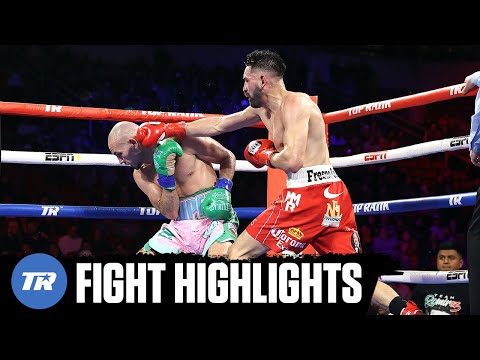 Ryan Garcia: “I don’t care about the belts, they don’t matter” »