Frank Sanchez wants Joe Joyce: “Too slow for me”

By Sam Volz: Unbeaten heavyweight contender Frank Sanchez believes he’ll be fighting Joe Joyce soon, possibly this year if his team can set up the bout.

Joyce, 36, will be fighting on September 24th, and his promoter Frank Warren is currently looking to find an opponent. Sanchez might be a little too quick on his feet & skilled for the slow-moving Joyce to take.

It would be a huge change in quality and fighting style from Joyce’s opponents since becoming a professional in 2017. Joyce has been chiefly fighting old guys with no mobility who couldn’t take advantage of his slow hand speed.

Dillian Whyte and Joseph Parker are high on the list for the 2016 Olympic super heavyweight silver medalist Joyce to fight, but it’s unlikely that either of those guys will take the risky fight.

Sanchez is better skilled than Whyte & Parker, and he would be a nightmarish type of opponent for the glacially slow Joyce to fight.

Even though there would be a lot to gain for Whyte and Parker in facing the 6’6″ Joyce, it’s unrealistic that either of them will agree to that fight.

“Joe Joyce and I will cross paths 100 percent; there is no question about that. The only question is will it be this year or next year,” Frank Sanchez said to Sky Sports about his desire to fight Joe Joyce.

Sanchez will be fighting in August against a still-to-be-determined opponent, which would preclude him from being in the running to face Joyce in September.

In Sanchez’s last fight, he pitched an impressive 10-round shutout of Christian Hammer, beating him by 100-89 x 3 scores on January 1st in Hollywood, Florida.

Sanchez focused primarily on boxing Hammer during the fight rather than trying to KO him, as Joyce had set about doing last weekend at the Wembley Arena in London.

Of the two, Sanchez looked more impressive with his victory over Hammer than Joyce, given that he didn’t get hit a lot by him. Sanchez looked like a surgeon with the way he outboxed Hammer, and it was neat & easy without getting nailed with repeated headshots as Joyce did.

“The Joyce fight will look very similar to [Efe] Ajagba,” Sanchez said. “He is very big and strong but too slow for me, slower than Ajagba. He will be no problem for me.”

Sanchez is correct about Joyce being very similar to the 6’6″ Efe Ajagba (15-1, 12 KOs) in terms of size, speed & lack of mobility. Ajagba is the bigger puncher and has a little more speed.  Joyce has the better chin, though, and that might keep him on his feet against Sanchez.

“I have no problem going to the UK to fight Joyce, but we will see what the future brings,” said Sanchez.

“The only thing I know is by next year, I will have a world championship; of this, I am certain,” said Sanchez. 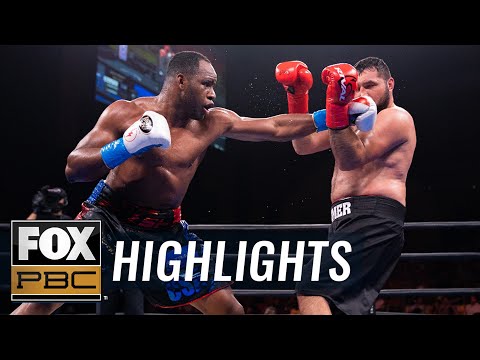 Jai Opetaia could defend against Jason Whateley in next fight »