By Charles Brun: Anthony Joshua’s new trainer Robert Garcia was gushing over the power of the former unified heavyweight champion this week after being hired on as the replacement coach ahead of his rematch with Oleksandr Usyk in July or August.

Garcia has been brought in to try and put Joshua (24-2, 22 KOs) back together again in a salvage job to retrofit the fading 32-year-old, who has lost two out of his last four fights.

Robert has his work cut out for him to try and improve Joshua in a hurry for him to unseat the unbeaten IBF, WBA & WBO champion Usyk (19-0, 13 KOs) in the summer in Jeddah, Saudi Arabia.

If Robert fails at his task, it’s predictable that he’s quickly replaced by a new trainer, who be given the same impossible task of rebuilding someone that can’t be rebuilt.

Robert is in the honeymoon stage as the new coach for Joshua, but if he loses to Usyk again, we could see a split.

While it’s great that Robert is banging on about how powerful Joshua is, he needs to understand that AJ’s problems that led him to this point involve his poor stamina & punch resistance.

No one has ever complained about Joshua’s power as a flaw in his game. His chin and his conditioning issues have led to his career being on the brink of implosion, not his power.

Joshua is arguably the equivalent of a ‘totaled’ car. It might be the only way to save his career is for his promoter Eddie Hearn to return to the same kind of matchmaking he was doing earlier in his career from 2013 to 2017.

“It’s a big challenge for me because it’s my first time to take a heavyweight to fight for a world title,” said Joshua’s new trainer Robert Garcia to Little Giant Boxing about him working with AJ for his rematch with Oleksandr Usyk.

“It’s kind of a dream come true. Those are the challenges that I like. Right now, Anthony Joshua is that challenge. He lost. I’m not going to say he took a beating because he didn’t take a beating.

“He lost a decision, but he clearly lost and now bring him back to pull off the ring. It’ll be huge for me as a trainer. Plus, having a heavyweight champion of the world, you can’t get any better than that.

“But overall talent, if you’re talking about talent, I pick Anthony Joshua. Another thing Anthony Joshua has is insane power. Oh my God, he’s got great power, more than anybody else, I think.

“Wilder, from what I’ve seen, knocking fools out, Wilder is one of those guys too that has that one-punch power. Anthony Joshua has it too. He’s very, very strong.

“I’ve had champions in almost every weight division, but having the heavyweight champion of the world, that’s special. I could have a hundred world champions, but if I don’t have a heavyweight, then something is missing,” said Robert. 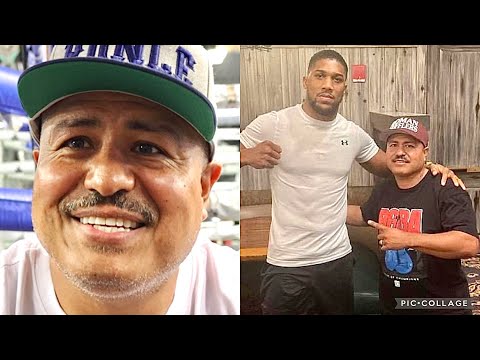 
« Kambosos: “I know how to beat him in the rematch”