Kambosos: “I know how to beat him in the rematch”

By Brian Webber: George Kambosos Jr was already off to an early start marketing a rematch against Devin Haney at the post-fight press conference last Saturday night, telling the media, “I know” how to win the rematch.

Not surprisingly, Kambosos, 28, isn’t saying his secret plan to beat Haney in the rematch, and you got to figure that he’s talking to get the fans & the media hooked to want to see a needless second fight.

If Kambosos knew how to beat Haney, he would have used it during the fight.

The fact that there will be a rematch is troubling, given how easily Haney (28-0, 15 KOs) defeated the unified lightweight champion Kambosos Jr (20-1, 10 KOs) at the Marvel Stadium in Melbourne, Australia.

Boxing fans don’t want to see Haney and Kambosos run it back because it was too dull & one-sided for a second contest.

“I know what I’ve got to do to beat him in a rematch,” said Kambosos at the post-fight press conference, talking about Haney. “We had the game plan, but we couldn’t implement it the way we wanted to,” said Kambosos, sounding like a fisherman complaining about the big fish that got away.

Kambosos couldn’t “implement” his game plan because he lacked power, combination-punching, and his arms were too short of reaching the target against Haney.

None of those things will change in the rematch unless Kambosos suddenly gets a late growth spurt at age 28, causing his arms to lengthen & his power to increase.

Listening to Kambosos’ excuses during the post-fight press conference was sad because the guy didn’t seem to get it.

Kambosos isn’t prepared to give up on his impossible dream of success, so he will force the second fight against Hany by activating the rematch clause.

Unfortunately, there are too many areas in Kambosos’ game that need improvements for him to beat Haney in a rematch.

It was plane to see what Kambosos needed to do for him to have had a shot at winning, but he wasn’t willing to go the extra mile by attacking Haney nonstop.

When Kambosos finally did start fighting in an all-out manner in the twelfth round, it was too late. He’d already given away the first eleven rounds by not being aggressive enough against Haney.

Kambosos will likely put more pressure on Haney from the get-go in the rematch, but it’s unlikely to work because he’ll be ready for that and will be on his bike.

“The ref did let a few things go, which should have been pulled up a touch, but it is what it is,” said Kambosos. “I’ll go back to the drawing board with my team, but congratulations to Devin Haney and his team for the win.

“They came out here like I did with [Teofimo] Lopez, and they got the win today, but I’ll be back. End of November, we can do it again,” said Kambosos. 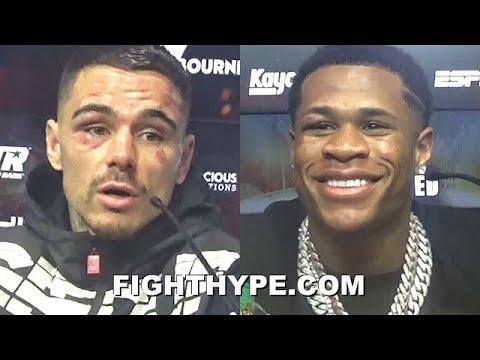