Boxing legend Mike Tyson became the latest high-profile guest to sit down for a one-of-a-kind conversation, as he went deep on the long and winding road that has been his life and career in a new episode of “The Pivot Podcast” debuting TODAY at 12 p.m. ET on the show’s YouTube channel, which coincides with the 25th anniversary of Tyson’s infamous “ear bite” fight against Evander Holyfield.

Following up their much-discussed and rare extensive interview with Pittsburgh Steelers head coach Mike Tomlin, co-hosts and former NFL stars Ryan Clark, Channing Crowder and Fred Taylor begin the episode expressing their reverence for Tyson that dates back to childhood. Clark declares Tyson, “the second man I was ever scared of,” before getting Tyson to reveal the unlikely start of his fighting life and how that kick started his love for combat. 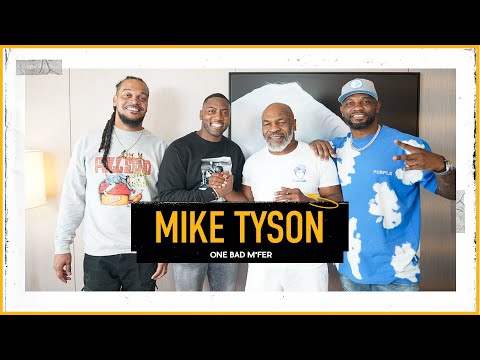 “This guy killed my pigeon and it was a wrap,” said Tyson, who was elected to the International Boxing Hall of Fame in 2011. “That was the first fight ever in my life, because of a pigeon…Then I just wanted more and more and more. I wanted to crush the world to my feet…I have a big deep hole in me. I had to have everything. All of it. When I was a young kid, I was unbalanced. It was always everything or nothing.”

As the conversations continues on with recaps of Tyson’s many achievements and out-sized cultural impact, the group asks him to go in-depth on how he feels now about the many rough moments of his life, including bankruptcy and the passing of his mother.

“Sometimes when God wants to check you, he gives you everything you want,” said Tyson, “And I wasn’t ready to handle it…Life is a trip, it blows your mind. I’m a poor guy who never had shit. I have to touch the stove to find out that it’s hot.

“That was the best thing that ever happened to me, that my mother passed away, and forgive me for saying that. It really inspired me to accomplish my goals. I did a lot of what I did in my career for her.”

He continues on this theme when discussing perhaps his most famous defeat, a loss to Buster Douglas in 1990, considered one of the biggest upsets in sports history. For him, the moment was not one of disappointment, but of relief.

“It was release,” said Tyson. “It happened, it’s over. Now we have to deal with this adversity. I understand fighting, I don’t take it personally. Now, I was an even better fighter, because I wasn’t afraid to lose. I did things I’d never do before I was undefeated.

“Fighting Buster was one of the best things to ever happen to me. I was so stressed out being the champ. My hair was falling out and everything…I was playing it up like I was still a hard guy, but I was scared to death…It made me human. I wasn’t an animal or a savage.”

This theme continues when Tyson describes his time in prison, and how even as he was stripped of so many things, tangible and intangible, he had finally found something more important to him.

“I had the best three years of my life in prison,” said Tyson. “I had peace. That money doesn’t mean anything if you don’t have your peace, your stability and your balance. You need your sanity to dictate any part of life.”

Having lived a life full of pivots, Tyson shares during the episode his mentality that has helped him in his current run of successful entrepreneurship, including his work in the legal cannabis business, which he samples from throughout the interview.

“When you make those mistakes and fuck up, you can’t get discouraged,” said Tyson. “You have to get up again and act like it never happened. It’s all about not giving up.”

Tyson brings this same mentality focused on internal fortitude to his parenting, another pivot in his later life that has helped him find that peace he’s always sought. For Tyson, those lessons are more important to his children than any financial help he provides.

“I can’t help someone by giving them money,” said Tyson. “I can only hurt them by giving them money. If they don’t have aspirations and haven’t been through any adversity, then they’re going to give in when they’re tested. I have to give them competition, whatever it is. They have to have that spirit. That’s what life is about.”

In closing out the raucous and enlightening episode, Tyson drops one last nugget of wisdom that he believes applies to all walks of life, and which has helped him reach this high point in his post-fighting life.

“I want people to know that life is the willingness to die,” said Tyson. “I believe that once you die, you start to live. There’s more than just us out there. You have to kill your ego to actually appreciate life. Ego is good, but it’s not a life. Use it for football and boxing or whatever, but live a life without it.”

Golovkin wants Canelo to be unassuming in promotion for their trilogy »