Golovkin wants Canelo to be unassuming in promotion for their trilogy

Golovkin is failing to understand that there’s not the same kind of interest from the boxing public as there was in the first two times the stars fought in 2017 & 2017.

Many boxing fans view the 40-year-old Golovkin as over-the-hill due to his age, low activity in the last four years, mediocre opposition fought, and the way he’s performed.

DAZN may have made a mistake in choosing to stage the Canelo vs. Golovkin III fight at this late stage because the interest is no longer there.

If this was a deal that was part of both fighters’ contracts when they signed with DAZN, then the streaming giant should have had an expiration date for when the match could take place.

The Canelo-Golovkin 3 trilogy would have made sense in early 2019, but not now in 2022, especially with Canelo coming off a loss to WBA light heavyweight champion Dmitry Bivol on May 7th.

With Canelo losing to Bivol, the only fight that would make sense for him to redeem himself is an immediate rematch, which isn’t happening.

Golovkin looked like an old man in his last fight against WBA middleweight champion Ryota Murata last April, getting hurt by the Japanese fighter with body shots and showing signs of exhaustion.

“We both have gameplans. How it’s going to play out, nobody can tell,” Golovkin said to the DAZN Boxing Show.

“To make any predictions will be just wrong right now.”

“If I were in his shoes meeting a guy in my weight class, going up a class the guy who’s 40 years old, I would still not be that vocal.

“I would still be more humble. We keep hearing all those loud words, ‘it’s personal to me’ — if it’s personal to you, where have you been for those four or five years?” said Golovkin.

“No, never,” said Canelo when asked if Golovkin has ever hurt him. “You got to use your head and be calm but angry.

“The day after the fight [with Dmitry Bivol], I told Eddie [Hearn], ‘I want that fight for September, the rematch.’ He said, ‘We have this contract with DAZN, and he already signed it too.

“Now, I’m 100% focused on Golovkin, but I have a mission in my mind. This fight right now is in my mind. I will be [knocking Golovking out].

“I’m very good at that,” said Canelo when told that the only time Golovkin has been hurt is to the body. “Like I say, I’m a more dangerous fighter now,” said Canelo about him being improved & more motivated after losing to Dmitry Bivol last May. 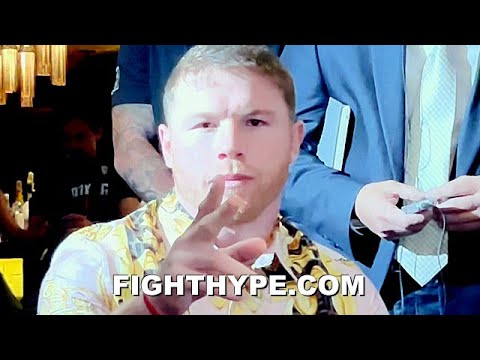