By Huck Allen: Danny Garcia believes October’s undisputed welterweight clash between unbeaten champions Errol Spence Jr. and Terence Crawford could come down to which of them feels better that day when they wake up.

The former two-division world champion Danny Swift fought Spence and lost to him by a 12-round unanimous decision in 2020.  From that fight, Danny discovered how powerful Spence is, and he sees him as dangerous.

Danny notes that IBF/WBA/WBC welterweight champion Spence (28-0, 22 KOs) has the size and the power advantage over the unbeaten WBO champion Crawford (38-0, 29 KOs).

What Crawford has going for him is his superior talent, says Danny, and feels that’s something that could give him the advantage if he’s 100% that day.

Danny states that if Spence is able to back Crawford up and punish him with shots like he did against Yordenis Ugas last April, then he’ll take that fight.

Crawford, a fighter that started his career at lightweight, won’t be able to stand up to that kind of sustained punishment from Spence without folding. Since moving up to 147 in 2018, Crawford has fought mostly lackluster fighters.

The best of the bunch was Shawn Porter, but he was on his way out of the sport after making good money in his loss to Spence in 2019.

In a wise move, Danny Garcia is moving up to 154 to campaign in that weight class, which means he’s going to be in a position to potentially fight Crawford & Spence soon if he successfully beats one of the top contenders or dethrones undisputed champion Jermell Charlo.

Leaving the welterweight division was a wise move for Danny Garcia because once Spence & Crawford leave the weight class, the only popular fighter remaining would be Keith ‘One Time’ Thurman, but he’s talking about moving up to 154.

Even if Thurman stays behind at 147, he fights irregularly, enjoying his money, and dealing with weight & injury issues. Danny can’t count on getting a rematch with Thurman, so it’s smart for him to move up to 154.

Brian Custer: “You mentioned Errol Spence. It’s been about a year and a half since we seen you in that fight. Errol was coming from a car accident and we had talked before that, and you said, ‘I’m catching this guy right at the right time,'” Brian said on his Podcast.

Danny Garcia: “I don’t know. I felt good going into the fight [with Errol Spence Jr]. I felt like I had a great training camp, but he’s a great fighter. Everything looked easy from the outside, but I felt it was a great competitive fight, to be honest.

“That was it. But other than that, I felt it was a great, competitive fight with back and forth action and two champions going at it. The result was the result.”

Custer: “What do you think about him coming right back from that accident and fighting you, and then going right to [Yordenis] Ugas and the way he’s looked since the accident.”

Danny Garcia: “He’s looking good, he’s a great fighter. What he [Spence] did to Ugas was kind of crazy. He punished him. I didn’t think he was going to do like that. He basically beat him down every round, and that just shows you he’s a great champion. You can’t take anything away from him.

“You fought and beat Bud Crawford, if I’m not mistaken, twice in the amateurs. How do you think that fight [Spence vs. Crawford] is going to play out?”

Garcia: “We fought twice in the amateurs. It was 1-1, but I feel like I won them both [against Crawford].”

Garcia: “That’s a great match-up. Like I said before, I think Spence is the bigger welterweight, he’s the bigger, stronger guy, he throws a lot of punches, and he is physically stronger.

“Crawford, I would say is the more talented guy. You know, with more skill, and it’s going to be interesting to see how Spence fights another southpaw like him.

“I think Spence, one of his advantages is him being the big guy, him being southpaw with a big jab. He’s never fought a southpaw with the skill level of Crawford, even though he’s right-handed, in most of his fights, he fought at southpaw.

“I just feel like this fight is going to come down to whoever wakes up and feels better on that day.

Custer: “I think we’ll find out which one of those guys has a hell of a chin because they both can throw some serious leather.”

Garcia: “Yes, absolutely. I feel like Spence is strong, he’s a strong puncher, but Crawford throws the shorter punches. So it’s going to be interesting because Spence is busy, and Crawford is probably going to be picking his spots and trying to get in his rhythm.

“It depends on who gets off better and is ahead. If Spence gets ahead and starts controlling the fight with his jab and backing Crawford up, then I can see Spence winning.

“If Crawford goes in there and finds a rhythm, then it might be a W for Crawford,” said Danny.

It’s difficult to predict how Crawford will do against Spence because he hasn’t fought anyone talented since his move up to 147 in 2018, and he’s getting up there in age at 34. 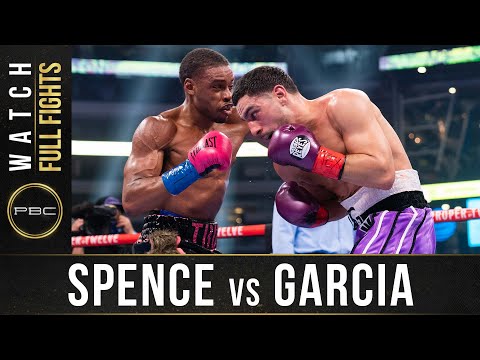 NEXT: Video: Mike Tyson High on life, fighting on shrooms, loss, legacy & 25 yrs ago vs Holyfield