The two fighters have a different outlook going into their rematch, and Atlas sees Usyk as wanting it more and willing to do what it takes to get the victory.

Atlas feels Joshua (24-2, 22 KOs) is just going through the motions and disengaged mentally, having lost his hunger because of his massive bank account.

According to Celebrity Net Worth, Joshua’s net worth is $80 million, which is a drop in the bucket for the money he’s going to make before his career is over.

When you have that kind of wealth, it’s got to be hard for Joshua to stay focused on the sport because he can go anywhere, buy anything, and live a life of luxury without the labor & pain involved in boxing.

“Joshua is no spring chicken; they’re both getting up there. I don’t know who’s older, but he’s getting up there a little,” said Teddy Atlas on his Fight Game podcast, talking about Joshua’s rematch with Oleksandr Usyk.

“He’s [Joshua] made a lot of money, and you must put that into the factor. Are you as hungry? He’s made a lot of money. I don’t know if he is [hungry],” continued Atlas about his belief that Joshua has lost his hunger for the sport due to his immense wealth.

“I think he showed the possibility of being influenced in those dimensions when he fought at Madison Square Garden and got knocked out by [Andy] Ruiz. He didn’t look like a hungry guy, he didn’t,” said Atlas about Joshua.

“He came back, give him credit, he came back and got the title from Ruiz. He fought in a different style and become another person, a different physical being for that, and took a lot of weight off.

“Okay, so Usyk is even older, but sometimes you judge age differently. For me, Joshua is starting to get older in a way that I started to touch on. He might have satisfied himself in certain realms of making money.

“When you do that, you get old. Yeah, because you get disinterested. I think that’s at play a little bit, and I think a guy like Usyk, it’s never about money,” said Atlas.

I think it’s about honor, pride, legacy, and now there’s an x-factor. I think it’s about his people,” Atlas said of Usyk. “That terrible war going on. In some ways, he may attach himself, and I’m sure he will, that he’s fighting for the people.

“Usually, in these kinds of match-ups, the hungrier guy, which I think is Usyk, was the underdog going in. Of course, he not only beat Joshua, but he also came close to stopping him.

“It was a close fight, but he [Usyk] dominated at the end. It was a chess match, but then it was a little bit of the quickness and dimensional ability of Usyk; the cerebral-ness and determination were there against the right hand of Joshua.

“He dodged it, and then he hurt him late and then came close to stopping him,” Atlas said of Usyk. “I think that’ll still be in the air, the power of the right hand by Joshua.

“Usually these fights, when I look at history, as I said, in the way I just drew it up, the way I just described it, when the fighter wins the first fight, [Usyk] the hungrier guy in the end, he dominated, I think, the guy that showed himself to be the better all-around fighter,” Atlas continued.

“When that guy wins the first time, he usually wins the second time easier. Here’s another x-factor on another side of the ledger. Usyk just went through a life-changing experience.

“All of a sudden it becomes minimal. All of a sudden, boxing doesn’t become as important as it once used to be. And that perspective, as proper as it is, and it is proper. There are things more important than anything we do.

“He can become that symbol of hope. So it’s going to be one or the other. That’s what makes this fight intriguing to me. Otherwise, I think it’s a one-sided fight or potentially, except for there’s always the power of that right hand [from Joshua] that could change things. 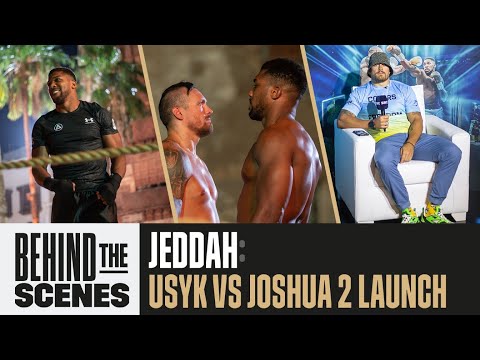 Canelo vs. Golovkin III: Is Gennadiy cashing out? »