Cordina knocked out Ogawa with a right-hand shot in the second round at the Motorpoint Arena in Cardiff, Wales.

Shortly after that, Cordina and his promoter Edide Hearn learned that Shakur (18-0, 9 KOs) had already expressed interest in coming to the UK to fight in a unification fight.

While Hearn is already pumping the brakes on the idea of a Stevenson-Cordina fight, Cordina likes the idea of battling Stevenson, and he wants to sit down with his promoters next week to discuss the possibility.

Hearn would prefer to have Cordina make a simple title defense against Zelfa Barrett or #1 mandatory Shavkat Rakhimov. Those wouldn’t be fights that would attract as much interest as a match against Shakur, but they would be more winnable.

A star is born

“Welsh boxing, without a flagship, without a star or an ambassador, it’s nothing,” said Matchroom Boxing promoter Eddie Hearn in beaming over Cordina’s victory. “There was an amazing atmosphere in there tonight.

“That fight [Ogawa vs. Cordina] should have been ten times bigger, but because of the lack of boxing in Wales because they haven’t had a figurehead. Even when Lee Selby had a world championship, he wasn’t really boxing irregularly.

“Now, you’ve got a chance with a young man [Cordina], a good look guy, great ambassador, good role model, who can actually take boxing forward in Wales. Build it from the grassroots up.

There is plenty of young talent as well, but we’ve got to come back. Joe has suffered from inactivity with hand injuries and other misfortunes. Now, you’ve got to stay active.

“Have a nice break with the family, and then come back in September. He had two rounds tonight, but a long camp. You’ve got to keep the momentum going, and it should be back here in Wales.

“Joe’s knockout was exciting. It makes people want to tune in again, and buy tickets. Every Welsh fighter should be crossing their fingers for Joe Cordina because it means there’s a future for them as well,” said Hearn.

“We obviously knew he had a big right hand, but as I said, ‘If I catch you, he’s going to have to ask himself some questions,'” said Cordina to Matchroom about his big win over Ogawa.

“I caught him tonight and it was lights out. Me and Tony [Sims] worked hours and hours on the same shot that we call, ‘Roberto Duran.’ Fake downstairs, jab downstairs, and then come up with the right hand.

“We’d been practicing all different ones. Come downstairs, come up with a left hook and then come up with a right hand and put him away. I’m just happy,” said Cordina.

“That was incredible,” said Joe Calzaghe. “That right hand. The way that you fainted to the body and came over on the top, it was incredible. A lot of people thought it was going to go to points.

“I’d like to see him come back and defend his titles some more times here. The other fighters are inspired by him, and make that buzz back in Cardiff,” said Calzaghe.

“That was the plan. My goal was always to be a world champion, and I’ve done that. I’ve ticked that off now,” said Cordina. “Now, it’s time to secure my family, and that’s what I plan on doing.

“Tonight, I don’t know where I pulled it from, but good night. Now I’m the champion of the world. Possibly, I know it’s still sunny in September. I know Shakur [Stevenson] said he’d come.

“No problem, come over. Maybe next week we’ll talk about everything, but tonight, I’m going to enjoy the moment, enjoy my time. I’m enjoying my night. I’m the champion of the world,” said Cordina.

“It’s aspiring and motivating for all us fighters in the gym,” said Conor Benn to Boxing Social, reacting to Joe Cordina’s second-round knockout win over Kenichi Ogawa.

“It happened so quick that I missed it,” said Benn about Cordina’s KO of Ogawa. “I said in interviews, ‘Don’t be surprised if Joe gets a knockout.’ It’s the shots that you don’t see.

“That was clinical, it was absolutely brutal. You don’t get better than that. There’s nothing that tops that. It’s the level of opponents as well. It was a formidable world champion [Ogawa], who people were scared of, worried about his power.

“In his last outing, he looked unbelievable. Joe just put him over like that, and it was good night. I wasn’t surprised, but sometimes you can say, ‘I think it’s going to happen, but when it actually happens, it’s like, ‘Wow!’.

“I was telling Joe, it’s really that one-moment, legacy, security, history. It’s all of those things. It doesn’t matter what the public says,” Benn said when told that Cordina will be the underdog against Shakur Stevenson.

“The public can manipulate the bookies or the odds based on hype as well, not factual. Joe done what he needed to do in there. It’s very rare where you get a stadium fight where you get what Joe can bring to Cardiff City Stadium

“Going in, I said the way Cordina was going to win was to box and fight, but by predominately by boxing. Jab and move, jab and move,” said Joshua Buatsi to Boxing Social.

“Anything can happen, and he just shown that he can punch. Going in, the narrative was that the other guy [Ogawa] was the puncher. It’s not just the narrative. It was a fact, and he went in and took the belt, snatched the belt off him.

“He’s had that confidence all fight week. Listen, all credit to Cordina. We don’t need to start looking at. Credit to Cordina. For me, I put myself aside. I’m solely happy for Cordina, the guy that I know.

“That’s what I’m here for tonight. I came to commentate, but I said, I get front row seats to see Cordina win a world title. I’m not going to turn that down,” said Buatsi. 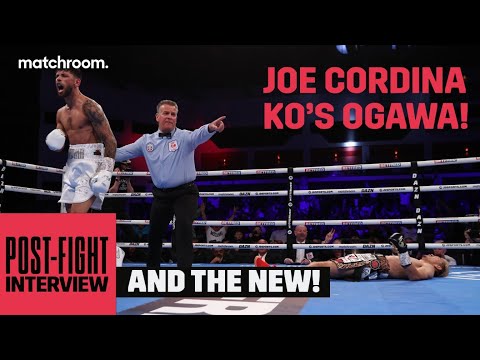