By Sam Volz: Oscar De La Hoy revealed to his followers on Twitter on Thursday that he’s received a one billion dollar offer for the sale of Golden Boy Promotions. The long-time promoter De La Hoya is considering whether to accept the offer or not, as it’s a massive one for his company.

It’s difficult for some boxing fans to believe De La Hoya has offered anywhere near $1 billion for Golden Boy. Still, with him talking about potentially selling, it suggests that his heart isn’t into being a promoter.

Since former Golden Boy Promotions CEO Robert Schaefer left the company in 2014, it hasn’t seemed as vibrant as it was during his time at the helm. Although Canelo Alvarez helped keep Golden Boy on top, it seemed like a rudderless company without Schaefer.

It wouldn’t be a massive shock to the boxing world if De La Hoya chooses to sell, considering he lost his #1 guy, Canelo, a couple of years ago, and the only popular fighter he has left is Ryan Garcia.

Some believe that Ryan will also be leaving when his contract is up with Golden Boy.

Unfortunately for De La Hoya, Ryan isn’t the type of talent you can count on to revive the company in the short term because he’s likely to be massacred when he’s matched against Gervonta ‘Tank’ Davis in a fight that could take place later this year.

“Golden Boy and its assets and the library and the best fights of the last 25 years, all the content we have, and media is king right now,” said Oscar De La Hoya to Fighthype when asked about the billion offer that he’s been given for the sale of Golden Boy Promotions.

“I don’t get involved with the ratings and Ring Magazine, but we’re sitting on gold, and I’ve never been one to shy away from a great offer.

“Several people want to buy my company, and I’m going to think it over, but I love the sport too much, so we’ll see what happens. I love boxing. This is what I do and my passion, and I want to make the biggest fights possible; that’s it.

Just received a 10 figure offer to sell @GoldenBoyBoxing what should I do?

According to Celebrity Net Worth, De La Hoya is quite wealthy already, with a net worth estimated at $200 million.

With that kind of fortune, it’s understandable why he would be tempted to sell Golden Boy so that he can enjoy his life without the stress involved with being a full-time promoter.

“I saw Oscar the other day. ‘Oh my God, someone has offered me a billion for my company,'” said promoter Eddie Hearn to iFL TV about De La Hoya telling the media that he was offered $1 billion to sell Golden Boy Promotions. “This geezer is off his tree. I hope he can get better soon, genuinely.” 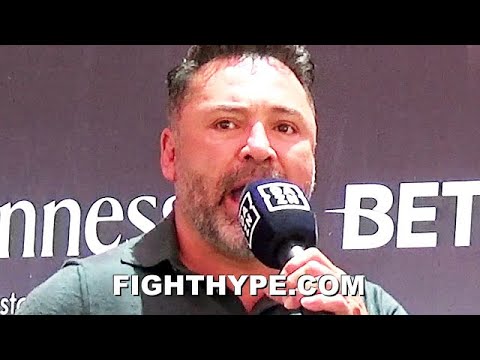