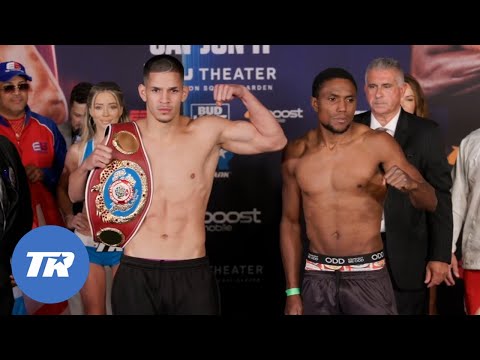 “The Chosen One” is back home. NABO super middleweight champion Edgar Berlanga takes center stage Saturday evening against two-time title challenge Alexis Angulo in the 10-round main event at Hulu Theater at Madison Square Garden. Berlanga, born in Brooklyn and whose family hails from Puerto Rico, takes the top spot on the eve of New York’s Puerto Rican Day Parade. A popular ticket-seller with fearsome knockout power, Berlanga (19-0, 16 KOs) hopes a win over the crafty Colombian gets him closer to a world title shot.

The winner of this fight will be the first recipient of Madison Square Garden’s Miguel Cotto Trophy. Puerto Rican icon Cotto, who is being inducted into the International Boxing Hall of Fame this weekend, headlined five MSG fight nights on the eve of the Puerto Rican Day Parade. Four-division world champion Cotto, from Caguas, will be ringside Saturday night.

In the eight-round co-feature of this all-Puerto Rican card, Henry Lebron (15-0, 10 KOs) and Luis Lebron (18-3-1, 11 KOs) will battle for the vacant WBO Latino junior lightweight belt. This fight was elevated to the co-feature after junior middleweight sensation Xander Zayas dropped out of his bout with a viral infection.

Berlanga-Angulo and Lebron-Lebron will be broadcast live on ESPN, ESPN Deportes and ESPN+ at 11 p.m. ET/8 p.m. PT. 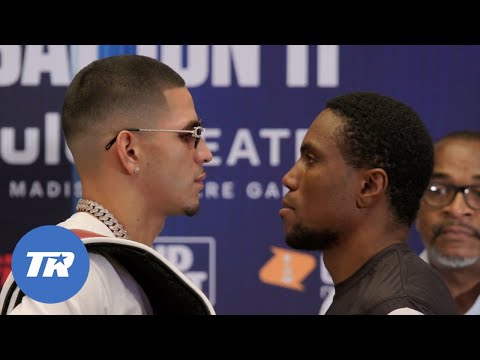 “I’m excited. It’s Puerto Rican Day {Parade} Weekend. {The first one} since the pandemic, two years. I’ve been dreaming about this since I was a kid. I feel like I spoke it into existence. My hard work paid off and now we’re here.”

“To be honest, my team and Top Rank felt like he was the perfect opponent for Puerto Rican Day Weekend. He’s the type of fighter that comes forward. Hopefully, he does that this Saturday. He’s a tough, rugged fighter. He makes it look ugly, comes forward. He has power just like me. He’s powerful, so it’s going to be an amazing night. And I’m excited to perform on Puerto Rican Day Weekend.”

On three straight fights without a KO

“It’s part of the process. I’m young, 25 years old. What can I say? I have 16 first-round knockouts, so I didn’t really gain the experience I needed. Definitely, these last three fights, I got the experience I needed. That’s the most important thing to make yourself a real professional athlete. But not only that, at that top level, you need those rounds. You need that feeling of what it’s like to get in the eighth, 10th round, and we got that done. This Saturday, Puerto Rican Day Weekend, I’m looking for a huge victory. I’m ready to go all out.”

“A lot of people don’t understand the last two years of not having a Puerto Rican Day Weekend and actually having a fight on that weekend… I’m just looking forward to performing, exploding like I always do and bringing back the old Edgar Berlanga.”

“I’m very thankful for the opportunity, and I’m going to take full advantage of it. We’re going to put on a good presentation for everyone.”

“I see my two losses as big lessons, and we’re going to see what kind of result we get in this fight.”

“I’m very happy with this opportunity. This is my first press conference. I’m happy that it’s just before the Puerto Rican Day Parade at Madison Square Garden, and I’m here to represent with a lot of pride.”

“My last fight propelled me to do even better and to keep showing that I’m a complete fighter. It motivates me even more, and I’m going to show the same Henry Lebron for a very long time.”

“I have been under the radar for a long time, but that motivates me even more. I’m thankful for this opportunity. I’m going to take full advantage of it. I’m going to put on a show.”

“I’m thankful to Top Rank and ESPN, and I’m here to represent my countrymen and put on a good show for the fans.”

“I am going to take full advantage of this opportunity. I have faced a lot of undefeated fighters, and like I said, this is a blessing for me and I’m going to put on a show for the fans.” 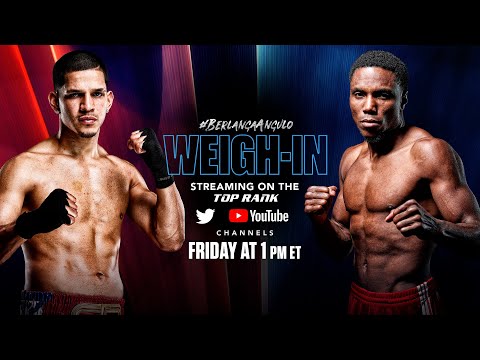 Edgar Berlanga – “On June 11, I will give my Island a big win on the eve of the Puerto Rican Day Parade. I am are ready to win big for all my Boricuas. This is a dream come true for me. I’m very excited and can’t wait to get in the ring in Madison Square Garden, just like Tito and Cotto used to do. Those are some pretty big shoes to fill, and it will not be easy, but I’m up for the task and I’m ready to do my own thing and put on a great show for all my people.”

“This fight will be big for my career. I’m ready to show up and show out as the new face of all Puerto Rican boxing. With this fight, I will set the tone and show everyone what I’m capable of. I have to win big and I will. Get ready for some fireworks.”

“It feels great to train in Puerto Rico. We decided to do training camp on the Island because we knew that we had a big task ahead and we needed to be fully focused. As I said, I want to win big. This has been one of the best decisions I have made. It’s great to feel the support from the fans. That actually motivates me even more. I’m so ready! I can’t wait!”

Edgar Berlanga is best known for the 16-fight first round knockout streak that kicked off his pro career. Yet the highly touted super middleweight prospect has had a long journey in the sport since he first picked up the gloves at the age of seven. Berlanga grew up in the talent-laden New York boxing scene alongside multiple future stars of the sport.

Berlanga’s father, Edgar, Sr., introduced him to boxing shortly after he returned home from prison. He connected his son with friend and boxing coach, Benny Roman, and it wasn’t long before Berlanga’s natural talent shone through. Shortly after his first sparring session, they entered the youngster in his first Junior Olympic competition. Berlanga opened his young career with 11 straight victories and a future star was born.

Boxing wasn’t the only sport that piqued Berlanga’s interest as a youngster. He loved baseball and was killing it on the basketball court as well but ultimately his dad convinced him that the sweet science offered the most opportunities for Berlanga.

He enjoyed a strong amateur career, securing medals in several national championship events before making the decision to enter the professional ranks in April of 2016. Once Berlanga turned professional, he began to showcase power and explosiveness that he didn’t display as an amateur.

His first-round knockout streak began to catch the attention of the boxing world and he joined forces with promotional powerhouse Top Rank in his 10th professional fight. Berlanga continued his run of first-round knockouts in his Top Rank debut in front of a hometown crowd at Madison Square Garden in April of 2019. Berlanga’s fights quickly became must watch tv as fans and pundits alike watched to see which of his opponents would finally see the second round. The power punching prospect pushed the streak to 16 before was taken the distance in his 17th fight against Demond Nicholson.

He heard the final bell for the second time in his last fight against Marcelo Esteban Coceres on October 9 on the undercard of Tyson Fury – Deontay Wilder III. The outing was quite the learning experience for Berlanga who not only went 10 rounds for the first time but also suffered a bicep tear in the third round of the bout. Berlanga faced

significant adversity for the first time in his young career, but he credits the bout for several lessons. He admits that he was too focused on trying to score the knockout and didn’t utilize his boxing skills but is pleased that he was able to learn so much in a victory.

Shortly after the bout, Berlanga underwent surgery to repair his torn left bicep and has relocated his training camp to Las Vegas for his March 19 fight to complete the necessary rehab on the injury. Following the completion of his rehab, Berlanga prepared for his first main even at the Hulu Theater at Madison Square Garden in his hometown of New York. Berlanga scored his 19th professional victory in his March fight.

Berlanga admits that he was born to be an entertainer and he loves every element of performing for an audience. His charisma, flashy personality and entertaining style has made him quite the celebrity magnet. From friends Tracy Morgan and Fat Joe to superstars Lil Wayne and Snoop Dogg as well as fellow athletes of every sport, Berlanga consistently draws big names to his fights. He hopes to add acting to his resume when the time is right, and no one would be surprised to see his bright smile lighting up the big screen.

A proud native of Brooklyn and the lower east side, Berlanga not only represents New York City but also his family’s native Puerto Rico. In fact, some of his earliest memories of the sweet science are watching Felix “Tito” Trinidad fight. He works hard to represent the Puerto Rican people and hopes to be the next great Puerto Rican boxing champion although he understands he has big shoes to fill.

Berlanga knows that he has a lot of eyes on him, and he’s always enjoyed being in the spotlight. It’s important to him to be a good role model for everyone looking up to him and to show young people that they can be anything that they want to be with hard work and sacrifice. He hopes to give the young kids coming behind up a blueprint for success, especially the younger boxers looking to follow in his footsteps.

Yet the biggest motivation in Berlanga’s life is his son, Chosen. He and his girlfriend Genesis Calderon welcomed their beautiful baby boy last year and it has certainly put things in perspective for Berlanga. He knows that he now has a family of his own and it’s his responsibility to provide for his son and show him the way in life just as his parents have done for him.

Berlanga credits both of his parents for teaching him so much and instilling work ethic, drive, and mental toughness in him throughout his life and he looks forward to guiding Chosen through life as his parents have done for him.

Berlanga is currently preparing for his 20th professional fight at the Hulu Theater at Madison Square Garden in New York City on June 11 He will take on two-time world title challenger Alexis Angulo in a 10-round super middleweight contest live on ESPN and in front of his hometown crowd. 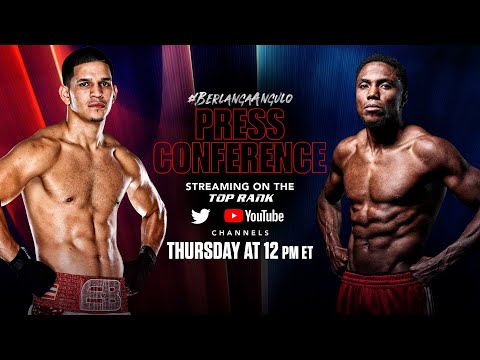