With the way Haney (28-0, 15 KOs) performed against the previously unbeaten Kambosos in front of the Australian fighter’s fans in Melbourne, Tarver puts him at the head of the pack at 135.

As far as a fight between Devin and WBA ‘regular’ lightweight champion Tank Davis (27-0, 25 KOs), Tarver doesn’t see the fight happening soon. Tarver feels the battle needs to build between the two before they meet.

In the meantime, Haney has a lot of opportunities for exciting fights, thanks to him holding all four titles at 135.

Devin can get any opponent he wants at lightweight, except for Ryan Garcia, who only seems interested in fighting Tank Davis.

“That fight is way too early. You know they’re not going to go near that type of fight right now because that’s a super fight between two of the possibly best lightweights in the world today,” said Antonio Tarver to Fight Hub TV when asked who wins a clash between lightweight champions Devin Haney and Gervonta ‘Tank’ Davis.

“Devin Haney got a lot of work; he’s busy right now. He’s got all those belts he’s got to defend, and when you’re looking at guys like Teofimo, and Loma, those guys are still out there, and Gervonta Davis is going to be out there as well,” said Tarver.

Tarver isn’t aware that Haney is planning on moving up to 140 soon because he’s outgrowing the 135-lb division.

The interesting fights that Tarver would like to see Haney involved in won’t happen unless those fighters move up to 140 to face him.

“Now, we want to see, can Devin Haney defend because they’ve been playing musical chairs with the undisputed lightweight championship,” said Tarver.

“Let’s let somebody sit down and be the King of the lightweight division for a little while. If it’s the undisputed champion, he’s going to put numbers in the seats and become the face of boxing. He’s a young black man that’s doing his thing.

“If you haven’t already seen the wave, the wave is already happening in boxing. You’ve got Gervonta Davis, you’ve got Haney, and you’ve got Shakur Stevenson, who is right there gunning for the unified junior lightweight championship, but he can move up at any time.

“You’ve got so many young black Americans that are moving the needle, and I like to see it,” said Tarver. 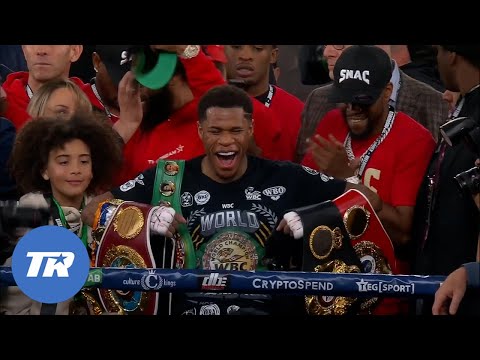