When told that promoter Frank Warren has penciled in October 22nd for his fighter Anthony Yarde to challenge the winner of the Beterbiev vs. Smith fight, DeGuardia said that’s “premature.”

DeGuardia says the WBO hasn’t designated that the Beterbiev-Smith winner must fight Yarde. If Smith (28-3, 22 KOs) defeats Beterbiev, they’ll decide which direction to go in, be it a rematch with Bivol or Beterbiev or possibly a clash against Canelo.

DeGuardia didn’t sound thrilled at having Smith fight Yarde (22-2, 21 KOs) on October 22nd in the UK, as he likes the idea of Joe competing in New York City at Madison Square Garden.

According to promoter Eddie Hearn, Bivol could be facing Joshua Buatsi or Callum Smith next in September or October. If Bivol wins, a rematch against Canelo is possible for May 2023.

“Firstly, I don’t want to look past Beterbiev. This is a real challenge, and we’re focused on Beterbiev,” said Joe Smith Jr’s promoter Joe DeGuardia to iFL TV when told that promoter Frank Warren has booked a venue in London on October 22nd for the winner of Beterbiev and Joe Smith Jr. to fight Anthony Yarde. He’s been in talks with Top Rank about that.

“While it might be a little premature for me to think about the next fight. What Frank is saying is without a doubt premature,” DeGuardia continued.

“Whatever conversations he might have, and I love Frank, and I’m sure he’s had whatever he says he’s had. Once this fight [with Beterbiev] is done and over with, Joe Smith and I will get together, and we’ll make decisions as to what we think is next.

“I know Frank believes the WBO will order a mandatory [against Yarde] for Joe Smith, but that hasn’t happened yet. A lot of things can happen.

“Joe wins that fight on June 18th; we’ll see where we go and what comes next. Certainly, we have a strong loyalty to the WBO because he [Smith Jr] is the WBO champion, and we’ll certainly listen to whatever their position is.

“But right now, there’s been no designation. It would be premature for Frank to say that because there hasn’t been a designation to that effect, and actually, I think that hurts him to try and make that claim and that Yarde should be. But he’s going to make his pitch and try and get his guy in there.

“From my perspective, we’re going to be looking for the biggest fights out there. That’s what I’m going to be doing on June 19th if it turns out that all goes well on June 18th for Joe Smith.

“Like anything else, money means a lot in this sport, but also does legacy, and Joe Smith wants to avenge that loss that he had to Bivol.

“So that’s going to weigh in and factor into our decision as well whoever else is out there who we can fight.

“Obviously, there are a lot of things that have to happen with the WBO in order for that to take place. Also, I imagine the WBO is going to be a very reasonable body as well.

“They’re a sanctioning body, and I have a lot of respect for them, and I’m not so sure they’re going to arbitrarily say, ‘Okay, this is what you’re doing, this is who you’re fighting.’

“I think they’ll go through their processes to determine who is the mandatory challenger at that time because nothing happens until that fight’s over, and then they’ll make their designation who the mandatory is.

“I heard you mention about Frank talking about the fight taking place on October 22nd in the UK. Well, there’s a lot for that to happen. Madison Square Garden seems like a very happy place for us to be putting fights on.

“For Joe Smith, we’re going to be selling out the Hulu for this fight [Beterbiev], I’m sure. Joe’s stature is only going to get bigger if he were to beat Beterbiev, and there are a lot of things that can take place here in the United States and New York for a massive Joe Smith fight if he beats Beterbiev and holds all the titles.

“So, I think all of those things will come into play, and as I said, Frank has got to go out there and hype his guy [Yarde] and do what he’s got to do for his fighter. When all is said and done, and Joe is the unified champion, we will sit down and decide what we think is best for his career in the next fight.

“There’s a certain Mexican legend out there in Canelo. He’ll be fighting in September, we expect,” said DeGuardo when asked what other options are out there for Smith Jr. to fight next other than Bivol.

“There’s a whole bunch of other guys out there that could make for interesting fights with Joe Smith and big fights. There’s a lot of action in and around that division [light heavyweight], and there’s a lot of things we can be looking towards.

“I also don’t put past the fact that should we get by Beterbiev, that fight, I expect, which is why everybody in England will be tuning in as well as on ESPN here and around the world.

“I expect that fight [Beterbiev vs. Smith Jr] to be real fireworks. I expect it to be bombs away in a really, really thrilling fight. So potentially, could there be a rematch if it’s that good of a fight?

“There are so many things that can take place, and really that’s why we have to wait to see what happens on June 18th. Again, I don’t want to get past June 18th because I know we have a real challenge in front of us in Artur Beterbiev. June 18th is going to be a special night for boxing,” said DeGuardia. 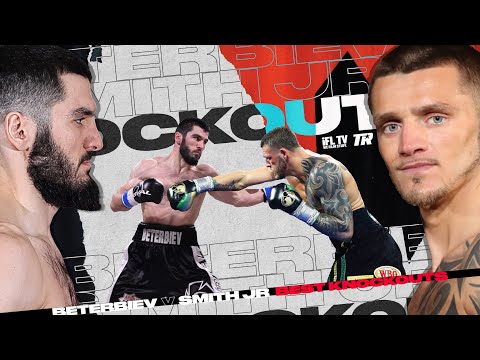 
« Devin Haney: ‘There’s something wrong with him [Kambosos’

Ryan Garcia on Tank Davis: “We can run it in December after I beat Fortuna” »