Ryan Garcia on Tank Davis: “We can run it in December after I beat Fortuna”

By Jack Tiernan: Ryan Garcia says he’ll be ready to “run it” against Gervonta ‘Tank’ Davis in December after he defeats Javier Fortuna on July 16th.

WBA ‘regular’ lightweight champion Tank Davis (27-0, 25 KOs) made it apparent that he wants Ryan (22-0, 18 KOs) next when he called him out before & after his successful title defense last Saturday night against Rolando ‘Rolly’ Romero at the Barclays Center in Brooklyn.

Ryan was in the audience during the Tank-Rolly fight, afterwards, Tank leaned over the ring apron and told Ryan, ‘You’re next.”

The unbeaten #2 WBC ranked King Ry says he’s not going to let his promoters at Golden Boy from making that fight because he’s ready for it now, and he doesn’t want to let it marinate.

Before Ryan can get to a lucrative fight against Tank in December, he must first defeat former WBA super featherweight champion Javier Fortuna (37-3, 26 KOs) on July 16th in their headliner on DAZN.

“No, not really. I thought he would be focused on his fight,” said Ryan Garcia to ESNEWS when asked if he was expecting Tank Davis to call him out last Saturday night following his sixth-round stoppage win over Rolando ‘Rolly’ Romero.

“I looked at him and said, ‘Focus on your fight.’ He was talking to me right before the fight started, ‘You next. You next.’ I said, ‘Bring it on,‘“ Ryan Garcia continued.

“The same s***, ‘You next,” said Ryan when asked what Gervonta said to him after the fight. “I’m hyped. I kind of called it on this one interview that I did. I said, ‘if there’s any shot, we fight, it would be during this time.’

“Now, I think even sooner. I think we could run it in December after I beat Fortuna, I believe so. The biggest, the biggest,” said Ryan when told that ESPN posted that him and Tank is the biggest pay-per-view fight along with Errol Spence Jr. vs. Terence Crawford.

“I’m pretty sure everybody will turn up on July 16th in LA. All my friends are coming out,” said Ryan about his fight against Fortuna. “We got to look at it like it’s going to be a great fight [Tank vs. Ryan]. I don’t really care about anything else.

“I know that fight, I win. I want to show everybody. After that fight, I demand my respect. You can’t say anything about me. I fought a prime fighter and I beat him. You’re going to see, mark my words.

“He said, ‘You don’t want that smoke with Tank,'” Ryan said about what Mayweather Promotions CEO Leonard Ellerbe told him during the Davis vs. Rolly fight last Saturday. “I turned up on him. I thought that was disrespectful to say that in front of everybody.

“Then it’s f*** them because I’m going to come after them. I don’t care if they say, ‘It’s going to be bigger later.’ I don’t care what side they’re saying. In my heart, I really want to run that next after Fortuna,” said Ryan Garcia. 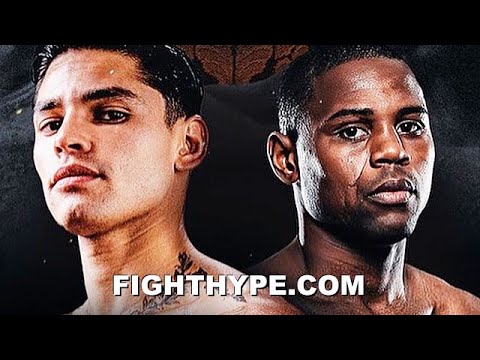