Devin Haney: ‘There’s something wrong with him [Kambosos’

By Brian Webber: Devin Haney has concluded that there’s something wrong with unified lightweight champion George Kambosos Jr. after meeting with him a handful of times in the build-up to their fight this Sunday, June 5th, at the Marvel Stadium in Melbourne, Australia.

At first, WBC lightweight champion Haney (27-0, 15 KOs) felt that Kambosos Jr (20-0, 10 KOs) was just an actor, putting on a phony facade, but now he feels something is wrong with the guy.

Haney, 23, was surprised last Sunday when Kambosos arrived without his belts. He felt it was strange for the Australian not to bring his titles with him for their press conference, but now he says he doesn’t care about it.

If he doesn’t want to bring the belts with him on Sunday night, it won’t matter. Haney will still be the undisputed champion, and Kambosos can keep the straps for whatever reason.

“There’s something wrong with him,” said Devin Haney to Top Rank Boxing about George Kambosos. “I don’t know what it is; I can’t put my finger on it, but he doesn’t have to bring the belts on fight night, but he’s going to know I’m victorious and undisputed. He can keep the belts; it’s cool.

“I don’t take him too seriously,” Haney continued. “He wants to get into a tough man contest and do all this macho man. We’ll see in the ring all that tough s***. By the end of the fight, all these fans will be mine,” said Haney.

It’ll be interesting to see what happens with Kambosos if Haney defeats him soundly on Sunday night.  Does Kambosos disappear like other one-hit wonders in the past, quickly being forgotten and never capturing another belt for the remainder of his career?

The colossal underdog Kambosos beat Teofimo Lopez last November might have to do with him being in the right place at the right time.

Teofimo was ill, weight drained, and rusty. He should have been in bed, recovering from his injury rather than fighting on the night. If a healthy Teofimo had been there on the night, Kambosos likely would have never won, and he’d just been another no-name opponent on Teo’s resume.

“This isn’t an act. These guys think it’s an act,” said Kambosos to Fighthype, who Haney has labeled as an “actor.” “I say it the way it is, by the heart. The belts don’t change who I am. I have the chip on my shoulder like I always had, ready for war.

“Devin Haney’s belt [WBC] is the regular belt, the same as Tank’s, the regular [WBA] belt. I’m the super champion of both divisions. So that’s why, one by one, I’m taking them all out, but my full focus is on Devin Haney.  I’m not thinking about anything else.

“Devin Haney is the only person in my mind, and I’ve got tunnel vision. I’m ready for war and zoned in,” said Kambosos. 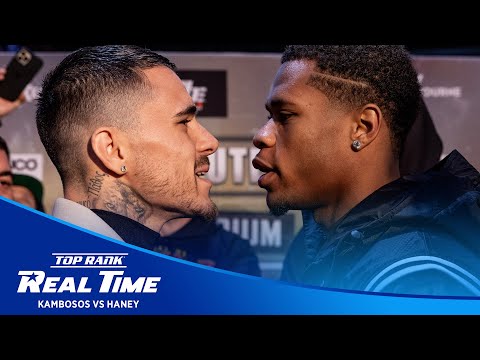