Hughie Fury vs. Michael Hunter to fight in July

By Barry Holbrook: Heavyweight contenders Hughie Fury and Michael Hunter have agreed to a fight taking place in July. Promoter Ben Shalom states that the exact date and venue are still being worked out.

A victory over the 33-year-old Hunter could place the nine-year professional Hughie in a position that could soon be challenging for a world title.

Hughie had a chance to put himself in a position to challenge WBA heavyweight champion Anthony Joshua in 2019. Unfortunately, he was beaten by Alexander Povetkin by a close 12-round unanimous in a title eliminator.

Hunter has had some tough luck lately, fighting to a pair of draws against Povetkin and Jerry Forrest. He destroyed Shawn Laughery and Mike Wilson by fourth-round knockouts in two impressive performances.

However, Hunter opted not to take on Filip Hrgovic in an IBF title eliminator that would have locked him as the mandatory challenger to champion Oleksandr Usyk.

“We have Fury – Hunter in early July. The terms have been agreed, so it’s just about the date in early July,” said Ben Shalom to Boxing Social about a fight between heavyweight contenders Hughie Fury and Michael Hunter.

“That’s an unbelievable fight,” Shalom continued about the Hughie vs. Hunter fight. “That’s a 50-50 fight on paper. Fury is ready for that fight, and he’s been waiting.

“He was meant to fight [Robert Helenious], and that was what was ordered. Helenius didn’t take it in the end. Michael Hunter is one of those fighters that we all know how good he is.

“He’s never really reached the heights that he could. I’m looking forward to that one in early July. It’s a massive moment for Hughie. It’s the start for Hughie.

“He’s fought such elite guys in the early stage in his career, and now he’s probably feeling like he’s coming into his prime. That’s a big fight for him, and hopefully, he goes on to bigger and better things,” said Shalom about Hughie.

It’ll be interesting to see if Hughie can continue his impressive run because he looks like he’s gotten a lot better lately, showing more power and skills than ever before.

If Hughie keeps improving, he’d have a decent chance of defeating IBF/WBA/WBO champion Usyk if he’s still the belt holder by the time he gets a shot. 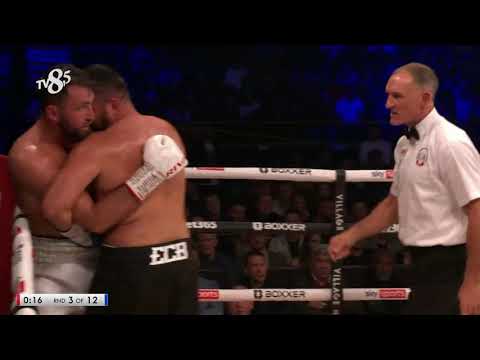