By Huck Allen: George Kambosos Jr is already predicting Devin Haney will flee the battlefield under fire on June 5th when the two lightweight champions meet for the undisputed championship at the Marvel Stadium in Melbourne, Australia.

Kambosos is already off to an early start with his mind games, attempting to psych Haney out to get him angry enough to where he’ll want to brawl rather than box on June 5th.

The 28-year-old Kambosos, fresh off a massive upset win over four-belt 135-lb champion Teofimo Lopez on November 27th, believes Haney will lose his nerve on June 5th once he tastes his power.

It would look bad on Haney’s part if he retreats under fire, relinquishing the fight for fear of being hurt by Kambosos.

In the most challenging fights of his seven-year professional career, Haney has never tended to retreat when the going gets tough, so it’s difficult to foresee him losing his nerve against Kambosos.

Haney has been wobbled in his last two fights against Joseph ‘Jojo’ Diaz Jr. and Jorge Linares, Kambosos notes, and he thinks he’ll be able to take advantage of the “holes” in his defense.

If Kambosos loses to the 23-year-old Haney, the Australian fighter can exercise the rematch clause to force a second fight, which will also take place in Australia.

“I believe he will run. He’ll run for his life when he feels the power,” said Kambosos to Fighthype about what he expects Haney to do on June 4th. “And when it comes to his defensive skills, I don’t think they’re that great.

“In his mind, he might think they’re great, but we’ve seen him hurt before. He’s been wobbled, been rocked, and these guys are way out of their prime or featherweights,” said Kambosos.

Haney will need to be more mindful of his defense against Kambosos because he’ll pick him apart and win rounds by landing the cleaner shots.

With the large Australian crowd behind Kambosos, the noise will amplify whatever shots he does land, resulting in the judges likely scoring rounds for him.

For Haney’s sake, he will need to stand and fight because he’ll look weak if he’s running around the ring trying to escape the pressure that Kambosos is putting on him.

The venue and the large crowd in attendance will greatly favor Kambosos, forcing Haney to fight more aggressively than he otherwise would if he wants to have his hand raised at the end.

Haney might have lost his last fight against JoJo Diaz if his foe had thrown more punches because he gave him problems when he did land shots.

“So, when a natural lightweight in his prime hits him clean and hits him multiple times, that’s what I’m excited to see how he reacts,” said Kambosos of Haney.

“He complains, but he’s getting life-changing money as well, and he’s getting an opportunity,” said Kambosos.

This fight didn’t have to happen if Kambosos didn’t want it. Haney isn’t mandatory for Kambosos, so it’s not as if he was forced to take the fight.

Kambosos wanted the Haney match because it pays well, allowing him to become the undisputed champion at lightweight.

No one is under the illusion that the Kambosos vs. Haney fight winner will be viewed as the best fighter in the lightweight division.

The winner of the Kambosos-Haney fight will be viewed as a four-belt champion, but NOT the best.

For the winner of this match to be viewed as the #1 guy at 135, they’ll need to defeat Vasyl Lomachenko and Gervonta ‘Tank’ Davis, which will be a tall order. 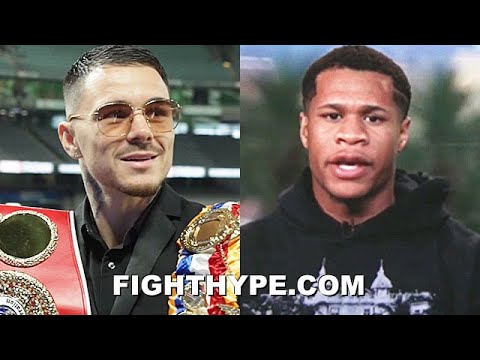