By Jim Calfa: Errol Spence Jr. suspects that Yordenis Ugas won’t be able to hang for the full 12 rounds without folding up like a deck of cards on Saturday night when the two welterweight champions square off at the AT&T Stadium in Arlington, Texas.

IBF/WB 147-lb champion Spence (27-0, 21 KOs) stopped short of saying that he’s absolutely certain that he’s going to KO the WBA champion Ugas (27-4, 12 KOs), but he does seem confident that his opponent won’t be around by the 12th round when the two meet on Showtime PPV.

Above all, Spence wants to entertain his Texas fans with his performance on Saturday night.

The fight is taking place in Errol’s backyard, so he wants to give the fans a great fight while at the same time sending a message to WBO welterweight champion Terence Crawford that he’ll be the next victim.

What’s really interesting about the Spence-Ugas promotion has been the focus from fans on the Crawford angle for the winner.

Instead of boxing fans putting their attention on the Spence vs. Ugas clash, they’ve talked nonstop about the winner facing Crawford.

For most fans, poor Ugas has largely been dismissed as the token lamb for Spence to slaughter, having no chance of winning the fight in their eyes. Ugas is just a bump in the road as far as the fans are concerned.

“This fight might not go the distance. Ugás is a tough fighter. He’s a guy that embraces the fight and wants to go toe-to-toe,” said Spence at the final news conference on Thursday.

“If he has to, he’ll do anything to win. I’m that type of guy. I’m the type of guy that if I have to go toe-to-toe, I will. If I have to stay there and fight, I will. If we get in the clinch and start fighting, I don’t think it’s going 12 rounds.”

“I want to become the future undisputed welterweight champion of the world. The first-ever to do it. This is my house. This is my hometown,” said Spence.

“He [Spence] said, ‘I’m going to clean up my side of the street, and then we’ll do whatever,'” said trainer Derrick James to Fight Hub TV. “He said he wants to be the undisputed champion of the world, so it’s next.

“If he said that’s what he wanted to do four or five years ago, he’s doing what he wants to do. I know everything can happen,” said James about a fight between Spence and Terence Crawford being possible after Ugas.

“We’re worried about Ugas. He’s [Errol] talking about it on the stage, so he’s talking about it [fighting Crawford next]. He said three or four times, ‘I want to be undisputed champion of the world,’ so what does that mean?

“I don’t want to talk about that either,” said James when asked if Spence will move up to 154. “We may move up.” 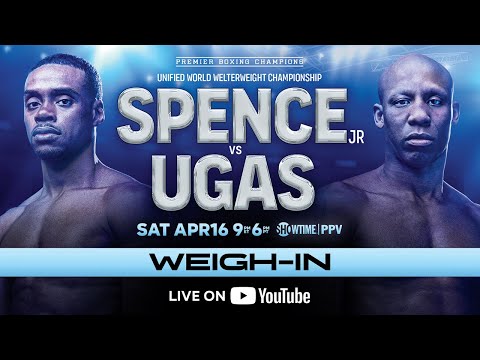