Boxing fans would like Benn (20-0, 13 KOs) to fight Avanesyan (29-3-1, 17 KOs) because he would be a huge step up in class from the older fighters that his promoter Eddie Hearn is repeatedly matching him against.

In what appears to be a cop-out, Benn said, “I’ll fight whoever they put in front of me.” In other words, Benn isn’t going to be assertive with his promoter Hearn to begin matching him against the killers like Avanesyan, Jaron Ennis, or Vergil Ortiz Jr.

With the excellent money Benn is making for his easy fights against old guys like 34-year-old Van Heerden and 37-year-old Chris Algieri, you can’t blame him for not wanting to put pressure on Hearn to put him in against world-class opposition instead of 2nd tier shot fighters.

“He looked frail to me. He looked slim to me. It doesn’t make any difference. He can come in heavy, he can come in light, I don’t read that much into it,” said Conor Benn to iFL TV about his inactive 34-year-old opponent Chris Van Heerden.

“I think that’s all he possesses is the southpaw style, but apart from that, I’m confident of my ability,” said Benn about the only issues the South African Van Heerden presents to him.

“I just focus on who they put in front of me. My eyes don’t sway anywhere else,” said Benn when asked who he could face in the summer.

“We’re in a different situation than Warren and his mob,” said Benn when asked about David Avanesyan. “They’re doing their own thing. I feel like I’m doing the right thing and have a bright future. Who else is he [Avanesyan] going to fight?” said Benn.

Interestingly, Benn seemed to get annoyed when Avanesyan’s name was brought up in the interview. You would think with the godawful opposition that Benn has been fighting. He’d be overjoyed in discussing a fight against Avanesyan.

It seems strange that Benn would get up in answering a question about him taking a huge step up against Avaneysan instead of continuing to face older fighters.

Hearn is already talking about wanting to match Benn against Adrien ‘The Problem’ Broner next. For the fans that don’t know, Broner is entirely shot and is arguably on the same level as Van Heerden, Algieri, and Samuel Vargas.

“We are challenging the big names. We do want the big names. I’ll fight whoever they put in front of me—the bigger the name, the better. I’m not interested in either of them [Avanesyan and Florian Marku]. They can fight each other. How about that?

“Stop calling me out. You two fight each other. Go on. How about your fight Ekow [Essuman]. Stop worrying about what I’m doing. I’m eating good. I’m not worried about what you’re doing,” said Benn. 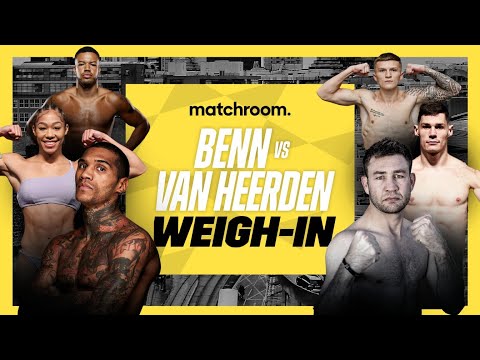