Tickets for the April 16 live event at AT&T Stadium, which TGB Promotions and Man Down Promotions promote, are on sale now and can be purchased at SeatGeek.com, the Official Ticketing Provider of AT&T Stadium. 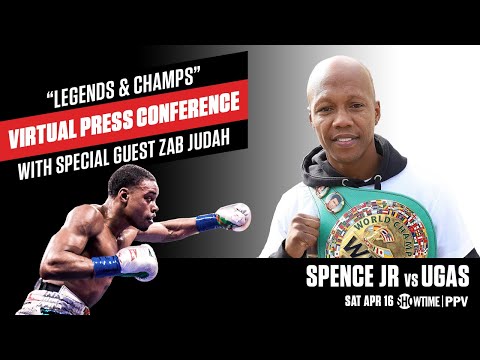 Just the 12th unification fight in the rich history of the welterweight division, Spence vs. Ugas will join other classic unification matchups at the weight class such as “Sugar,” Ray Leonard vs. Thomas Hearns I, and Floyd Mayweather vs. Manny Pacquiao. Spence will look to add a third belt by defeating Ugas, moving him one step closer to becoming the first undisputed welterweight champion since Judah accomplished the feat in 2005.

Here is what the press conference participants had to say Wednesday:

“It’s motivating to hear from Zab. When you grew up watching a person, and now it’s your turn, and they give you high praise, it’s incredibly encouraging. I appreciate Zab’s support. Many older fighters don’t show their support to the younger generation. I give much respect to Zab. His support means a lot.

“I remember when I was younger, watching Zab winning all the belts. That’s something I wanted to do. I never dreamed in a million years that I’d be doing that. It’s a dream come true. I just have to stay focused because every fight is the most important. This is the third time I’m taking someone’s belt. The welterweight division has had many great fighters and champions, so doing it at this weight class is a significant accomplishment.

“It’s gotten easier to fight in my hometown. You get a lot of pressure from fans, media, and friends, but you have to block all that out and focus on the task at hand. It’s still remarkable to fight at home in front of your family, friends, and day one fan. That ring walk is lovely, too—walking out and seeing familiar faces. You don’t get that in other places, but they can come out and watch you fight at home.

“All of my training camps have been at home. I rarely go to a fight hotel unless I’m fighting out of state. I like the comfort of being at home, being around my family. I don’t particularly appreciate getting on planes, especially when trying to make weight. You’ve got to hop out of the plane and go to a boxing gym you’re unfamiliar with. I’d rather just stay home.

“I don’t see any trickiness in Ugas. I think people put too much emphasis on that. Most Cuban fighters move a lot and get on their toes, but Ugas is not even that. He’s a guy who tries to fight, and he wants to fight and trade shots. I don’t stand in front of opponents. I boxed Mikey Garcia, and I banged with Kell Brook and Shawn Porter. I boxed in the paint with Lamont Peterson, slipping and countering.

“I’m adding to my legacy. Every fight that led up to this is just as crucial as this fight because they got me to this point. If I didn’t beat those guys, I fought when I was 9-0, 10-0, and then I wouldn’t have gotten the Kell Brook fight. If I didn’t beat Brook, I wouldn’t have gotten the Shawn Porter fight, Danny Garcia, etc. So, every fight means a lot to me because it leads me to better fights and more accomplishments.

“Being a student of the game and just my style makes me a throwback fighter. I feel I’ve always had a professional fashion, even in the amateurs. I was going to the body then, stopping people to the body. I always had that patience, and that’s why I was highly regarded once I turned pro. Also, I have a laid-back personality, so I transfer that over to my fighting ability.

“It’s about working hard every day, striving, and staying on the grind. I will perform to the best of my abilities, and I’m 100%. I want to show everyone that they don’t have to worry about anything.

“It feels good to prove all the doubters wrong. It motivates me. I just use it as fuel for all the people who say certain things. On April 16, they will see not even the same version of me but a better one.

“Everybody tune in on Saturday, April 16. If you can’t be there at the AT&T Stadium, you can order it on SHOWTIME pay-per-view. It’s going to be an amazing event, an all-action fight. It’ll be one-sided on my end, but you will see an exciting fight.”

“I have a lot of respect for Errol. Number one, for him being the human being he is. Since the amateurs, he’s a solid, solid fighter I’ve been watching. Errol was a guy who always stood out there. When he turned to the pros and began making a name for himself, I watched him. He’s about to do something big and become the next undisputed welterweight champion. No joke. I feel great passing on the torch, no joke.

“I feel I don’t have to give Errol any advice. He just needs to do what he has to do to win this fight – work behind his excellent jab and let his combinations go. Like I said, to pass the torch is dope. Errol Spence is the guy for the job.

“It didn’t matter to me where I fought. Even when I went to win the undisputed championship of the world, I had to go to St. Louis and Cory Spinks’ hometown, and it was a crazy time for me. I got death threats and all kinds of stuff. But that meant nothing to me. I was focused. I was locked in. I know how Errol feels. When you’re locked into something, and it’s your time, there’s nothing that can stop you: nothing or nobody.

“I like watching [Errol] in the Shawn Porter fight and the Danny Garcia fight. Errol showed a lot of heart and pulled through. He looked to be confused at times, and he pulled through it. Shawn Porter came in with many ugly looks, but he figured it out. Even in the Danny Garcia fight, he got caught with a good left hook, but he returned to his jab and started boxing. That’s a great thing about being a great left-hander. You can begin to back with the jab, and it’s all back together again.

“It was a phenomenal feeling when they strapped those belts on me. And I was in the ring, and I saw all these colorful belts being passed onto me. It felt like I had a bag of Skittles. I was so happy seeing all those colors. I was like, ‘Wow, this is amazing.’ And when I got back to New York, they embraced me, and I had a parade and things. The city opened up.

“Yordenis Ugas is a very talented fighter. He’s a very hard worker and is a guy who’s worked hard to get where he is. And I have a lot of respect for him. I’ve never fought a Cuban fighter, but I used to spar with Joel Casamayor and spar with the Cubans fighters. You know they are very crafty, and they do many things that we normally don’t do. Just little types of tricks that they got.”


« An Open Letter To Canelo