Rolly sees it as a lackluster fight between two champions that don’t have a large fanbase to support them. Nevertheless, hardcore boxing fans will be interested in watching the Kambosos vs. Haney contest, because the outcome will have an impact on the lightweight division.

With Rolly signed with Mayweather Promotions, he arguably has no chance of being matched by them against the winner of the Kambosos-Haney fight.

Mayweather Promotions likes to keep their fighters in-house, meaning that Rolly probably will never get a shot at fighting guys like Kambosos, Haney, Ryan Garcia, or Vasyl Lomachenko.

“The fans lose. They’re going to pay for some s*** that they shouldn’t pay for,” said Rolly Romero to Fighthype about his thoughts on the June 5th fight between George Kambosos Jr and Devin Haney.

“Imagine if that s*** were on pay-per-view. You would buy it, but it’s kind of your job to buy it. I’ll tell you. It’ll do 32K pay-per-view buys at most,” Rolly continued with his downgrading of the Kambosos vs. Haney fight.

“There’s something that’s going against Devin really bad, and that’s his lack of power and lack of balls. Not really. You can fight anywhere you want. It doesn’t matter,” said Rolly when told that Haney is showing courage by agreeing to fight Kambosos in Melbourne, Australia.

“I’ve seen him on his bicycle against Jojo Diaz and Linares. So, he has a weak genetic make-up, I feel bad for him, and he’s ugly,” Rolly said of Haney. “You can’t compare. I’m a puncher, bro. He’s a frail fighter. You can’t compare.

“I’m sorry, you can’t compare. Obviously, me and Tank,” said Rolly when asked whether his fight with Gervonta ‘Tank’ Davis on May 28th is bigger than the Kambosos vs. Haney contest.

It seems clear that Rolly is bitter about the attention the Kambosos-Haney fight is getting right now. Rolly shouldn’t be upset about the fans being interested in seeing the unbeaten Kambosos (20-0, 10 KOs) and Haney (27-0, 15 KOs) complete for the undisputed lightweight championship.

Of course, it’s got to be frustrating for Rolly because he knows he has no chance of fighting those guys as long as he’s signed with Mayweather Promotions. He’ll be forever outside looking in, unable to get a chance to fight the top guys in the division.

Once Tank leaves Mayweather Promotions, Rolly’s options will be limited unless he moves up to 147.

“I think Kambosos punches harder and has more balls than Devin. I really don’t give a f*** about that [trying to become undisputed at lightweight].

“I want to be a pay-per-view star. That’s what matters in this sport. If you’re not feeling seats, you don’t matter. It comes from winning just in general. How are you not going to win belts when you’re at the top of your career,” said Rolly.

The odds of Rolly becoming a pay-per-view star are slim right now, especially if he loses to Tank Davis like most boxing fans believe he will.

“I want to knock Tank out, that’s my job, and become a pay-per-view star and then become pound-for-pound the greatest fighter in the world. 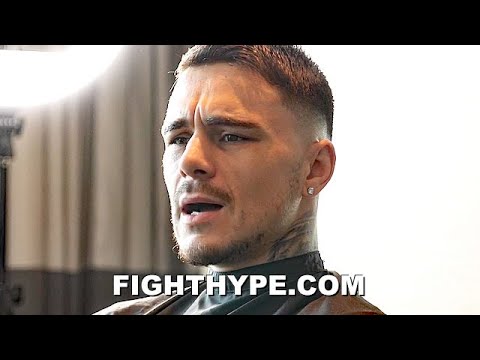 
« Shakhram Giyasov vs. Christian Gomez added to Canelo vs. Bivol card on May 7th