By Dan Ambrose: Rolando ‘Rolly’ Romero says he’s coming into his May 28th fight against Gervonta ‘Tank’ Davis with a “Zero game plan” for this fight because he feels he doesn’t need one to win.

Unbeaten Tank will be defending his WBA secondary lightweight title against #1 WBA Rolly in the main event on Showtime pay-per-view at a still to be determined location.

Romero (14-0, 12 KOs) wants to let it happen and adapt on the fly during the contest, and that way, he wan change things as needed.

Boxing fans wouldn’t be giving Rolly any shot at winning if not for Tank’s recent lackluster performance against Isaac ‘Pitbull’ Cruz last December at the Staples Center in Los Angeles.

Pitbull Cruz’s success in that fight in coming close to beating Tank showed that he’s not the fighter that some boxing fans had previously thought he was.

Rolly expects Gervonta to walk into a shot

“I’m going, to be honest with you. They always say you got to go into a fight with a game plan and all that kind of stuff. I have zero game plan for this f*** fight,” said Rolly Romero to Fighthype on his May 28th title fight against Tank Davis.

“Zero game plan. I just feel like things are going to happen naturally, and he’s going to run right into something.” Rolly continued about his grand plan for beating Gervonta Davis.

Rolly might be better off fighting in his usual awkward style than for him to come into the contest with a game plan that Tank and his trainer will figure out immediately.

More importantly, Rolly will never beat a fighter like Tank by jabbing from the outside or hitting & moving.

The only strategy that could work for Rolly is if he goes to war with Gervonta and nails him with one of his incredible shots.

“But as I say, you ain’t got to have no damn game plan. I never sparred him [Tank]. Yeah, yeah, a lot of complications with the other party.

“He had his menstrual cycle going, and he just couldn’t, you know? I said he should take one of those Hibiscus tea, you know?

“It might help regulate him and all that stuff, but he doesn’t follow directions. We didn’t get that in, you know?” said Rolly.

Tank will try and fight defensively because he’s not going to want to be hit by the heavy-handed Rolly too many times because he’s got the power to end things.

“Even Rolly ain’t no joke. I personally think Rolly might beat Tank, which is crazy, but I’ve seen crazier things,” said Blair Cobbs to the media on Thursday.

“Rolly is something different. He taught me many valuable lessons just watching his career. I know him personally, but watching him grow from nothing to something.

“That’s more powerful than anything. Never underestimate stupidity, and he beat some fighters that he wasn’t supposed to beat already,” continued Cobbs about Rolly.

“He’s a big-ticket seller. He might knock Tank Davis out. Who knows?” said Cobbs. 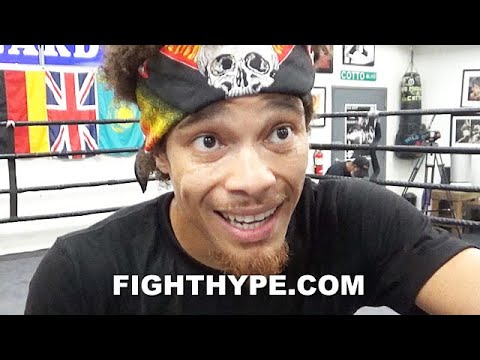