By Jim Calfa: A slim and blazing fast former IBF/WBA/WBO heavyweight champion Andy ‘The Destroyer’ Ruiz Jr. is back in training for his next fight against a still-to-be-named opponent.

The upper body and head movement that Ruiz (33-2, 22 KOs) showed with his workout with trainer Eddy Reynoso looked eerily similar to Canelo Alvarez’s, making it clear that he’s learning from the superstar.

Ruiz’s diminished punch resistance that he exhibited in his last fight against 40-year-old Chris Arreola makes it essential that he put more energy into his defense, even if that means less time spent attacking his opponents.

As long as Ruiz can use the things that he’s showing with Reynoso inside the ring, he could be a dangerous opponent for any of the top fighters.

Ruiz Jr, 32, will be coming off another long layoff after a year when he finally returns to action. He hadn’t fought since May 1st, when he struggled to defeat 40-year-old former three-time heavyweight world title challenger Chris Arreola.

If Ruiz Jr. wants to get another title shot or a trilogy match against Joshua, he must stay more active with his career. These constant long layoffs from the ring aren’t helping his career.

After Ruiz lost his three titles against Joshua in December 2019, he was out of the ring for a year and a half before coming back to fight Arreola last May.

Since that fight, the California native Ruiz, 32, has stayed out of the ring for the last ten months, and by the time he does get back in, he’ll have been sitting on the sidelines for 12 months or more.

Thus far, Ruiz isn’t giving any hints on who he plans on fighting next, but it’s fair to say that it’ll be one of the top 10 contenders, possibly even a top 5.

Ruiz wants to get a well-paying trilogy match against former IBF/WBA/WBO champion Anthony Joshua, who he’s 1-1 against after fighting him twice in 2019.

Joshua’s promoter Eddie Hearn had already given Ruiz his marching orders about him needing to pick up two or three significant wins before he’d been considered as an option for AJ.

Thus far, Ruiz has chosen not to heed Hearn’s words, which signifies that he and his management believe they can get the trilogy against Joshua by taking the easy path against weaker heavyweights.

There had been rumors that Ruiz Jr. might get a fight against former WBC champion Deontay Wilder, but that’s probably not going to happen. Eddie Hearn said on Thursday that Joshua’s #1 choice for an interim fight would be Wilder.

If Wilder is interested in making the most money possible for his next fight, he’ll take the Joshua match-up and get a massive payday.

Most boxing fans would agree that the fights that Ruiz needs are against these fighters: 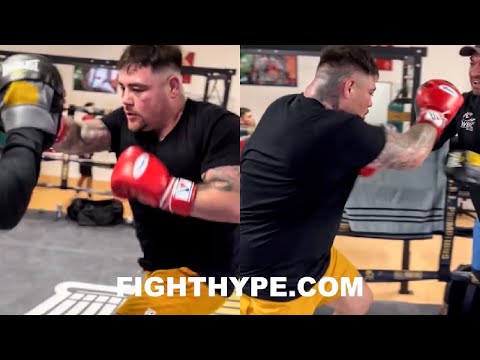