By Charles Brun: Eddie Hearn says Chris Van Heerden is the last opponent for welterweight Conor Benn at the current level before stepping him up against the big names.

Hearn says Benn, 25, is approximately 12 months behind Jaron ‘Boots’ Ennis in terms of development, and that’s why he feels that it’s okay matching him against Van Heerden.

Boots (28-0, 26 KOs) fought Van Heerden a year and a half ago in December 2020, which was stopped after the first round due to a bad cut that Chris suffered from a clash of heads.

Hearn might be kidding himself a tad bit by insisting that Benn is ONLY one year behind Ennis in development.

There’s a lot more to it than the number of fights. Ennis was already showing far more skills than Benn in his first fight as a professional back in 2016.

For Benn to catch up to where Ennis is now, it might take 10+ years, and he’s certainly not going to do that being matched against fighters like Chris Algieri, Van Heerden, and Samuel Vargas.

The “big names” that Hearn will begin matching Benn against should he defeat Van Heerden on April 16th are Kell Brook and Adrien Broner.

In other words, more older guys like he’s been facing. It’ll be more of the same kind of opposition Benn has been fighting record-padding fights.

“Yes, that was the only delay,” said Eddie Hearn to iFL TV on his rationale for delaying the announcement of the April 16th fight between Benn and Chris Van Heerden due to him waiting to see if he could get Kell Brook or Amir Khan as an option for Conor.

“Conor Benn is a superstar. We’ve seen that through the numbers through the engagements, and this is a big fight. The last time he headlined in Liverpool in front of seven thousand. Now he’s going to Manchester.

“What other fighter can do that? Box all around the country, headlining and drawing those kinds of crowds, and he’s still learning. This is it, the last one before he jumps into like a really big name and a big risk. Kell Brook, Adrien Broner,” said Hearn in listing the so-called “big name and BIG risk” fights that Benn is going to “jump into.”

“If Kell Brook was making the decisions, I think he’d sit down with me and get this fight made in the summer,” said Hearn.

Brook a possibility for Conor this year

“We were supposed to announce a week before, and Conor said to me, ‘I’d like to fight Kell Brook. Can you at least see if that’s a possibility?’ So we said, ‘No problem, we’ll delay for a week,” said Hearn.

“We went through, made Kell Brook and offer, talked to Amir Khan’s lawyer, and it’s not there. Yeah,” said Hearn when asked if the rumors are true that Brook asked for $10 million for the Benn fight. “It was somewhat beyond our offer.

“Now that Amir Khan has activated the rematch clause, which I think is more of a strategic play. Amir should never fight again, but maybe he wants another payday? Maybe in his mind, he thinks he can beat Kell Brook?

“It’s a nothing fight now. Now one wants to see that fight again, but if it has to happen, it has to happen. We’ll wait after that. We have an opportunity. The only fight for Kell Brook is Conor Benn.

“Hopefully, Kell realizes that’s the perfect fight for him, and we’ll see what happens with the Amir Khan situation. Obviously, if they have the rematch, we’ll [Benn] have to wait around.” Hearn said.

Matchroom promoter Eddie rates the soon-to-be 35-year-old Van Heerden highly as a fighter even though he’s never beaten anyone talented during his long 16-year professional career.

Van Heerden has largely fought sub-level opposition, but when he tried stepping it up against Errol Spence Jr. and Jaron Ennis, he was thrashed unmercifully.

Hearn mistakenly said that Van Heerden’s fight with Boots Ennis ended in a first round technical draw. Wrong. It was a no-decision after Van Heerden suffered a large cut on his forehead in the first round

. But before the cut opened, Van Heerden was taking terrible punishment from Ennis and forced to run around the ring to try and avoid getting taken out in the round.

“I think a little beyond that because he’s boxed at a very high level, he’s tough, he’s a southpaw, which is the first competitive southpaw Conor Benn has faced in his career,” Hearn said of the 34-year-old Van Heerden.

“I think that’s a big test in itself,” said Hearn when asked if Chris van Heerden is on the same level as the opposition that Conor Benn has been fighting.

Also, I know it was 18 months ago, but Van Heerden’s last fight was against Jaron Ennis. It’s still his last fight, and it was headlining on Showtime. Conor Benn is not Jaron Ennis right now.

“I think he has all the potential to be a brilliant welterweight, but Jaron Ennis is there. Jaron Ennis might be the best welterweight in the world. The fight [Ennis vs. Van Heerden] was a technical draw or whatever it was [Ennis-Van Heerden was a no decision] because of the clash of heads.

“What I’m saying is I feel like Conor Benn is 18 months behind Jaron Ennis or maybe 12 months. 18 months ago, in Chris Van Heerden’s last fight, he boxed Jaron Ennis, headlining on Showtime, and it was alright for Jaron Ennis.

“Now you’ve got a young welterweight in Conor Benn, who now fights Chris Van Heerden and ‘that’s not good enough.’ Trust me; this is a good fight. Van Heerden is as tough as old boots.

“He will give everything, and he won’t take a step backward. He won’t box conservatively; he won’t try and box and move.

“He will come to fight, and you will get a really good fight from Conor Benn. He’s [Van Heerden] a southpaw and a good challenge,” Hearn said.

There’s nothing to rate from Van Heerden’s performance against Ennis because he looked worse than awful in that fight.

Surprisingly, Hearn is willing to match Benn against this level of opposition rather than stepping him up against world-class fighters. 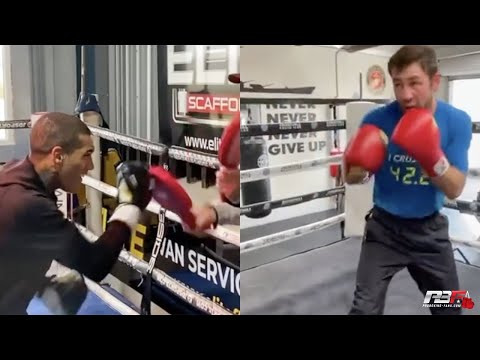