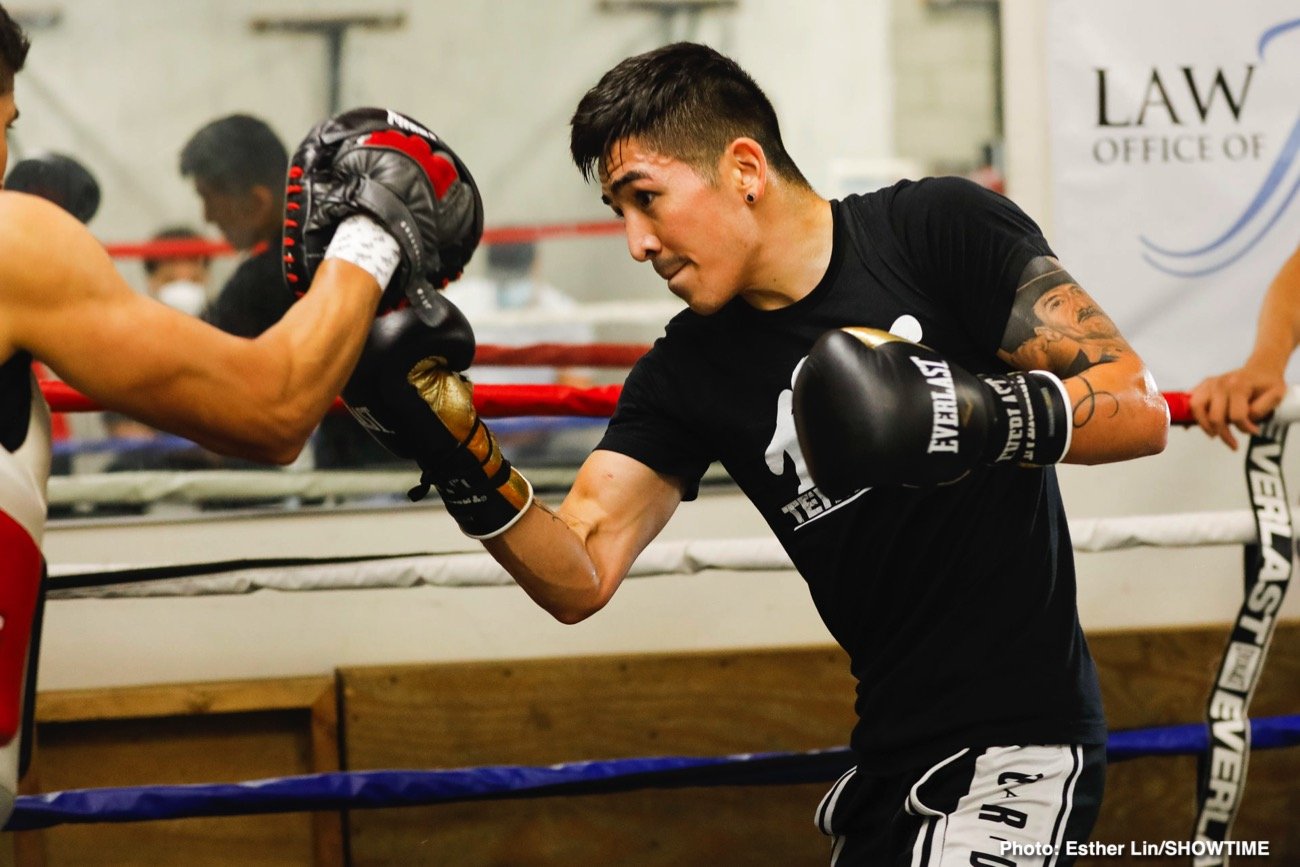 By Jim Calfa: The former four-division world champion Leo Santa Cruz will be coming off a 16-month layoff on February 5th when he takes on Keenan Carbajal in 12 round co-feature bout on FOX pay-per-view at the Michelob Ultra Arena, in Las Vegas.

This will be the 33-year-old Santa Cruz’s first fight since suffering a devastating sixth round knockout at the hands of Gervonta ‘Tank’ Davis in an ill-advised battle on October 31st, 2020.

Santa Cruz (37-2, 19 KOs) has had plenty of time to rest up after suffering his brutal knockout against Tank Davis, so he should be okay unless he gets clipped with another big shot that he doesn’t see coming.

Tank took advantage of Santa Cruz’s habit of throwing the same hook repeatedly during that fight. Rather than mixing things up, Leo was repetitive with the hooks that he was throwing, and once Gervonta figured him out, he landed a big uppercut that knocked Santa Cruz out cold.

The good news for Santa Cruz’s fans is he’s turning to the 126-lb division, which is where he should have stayed, to begin with.

Unfortunately, he’s not looked good since moving up to super featherweight in November 2019, and he should have realized after he struggled to defeat Miguel Flores that he lacked the size to compete at 130. Shortly before that fight, Flores had been easily beaten by Dat Nguyen and Chris Avalos.

The other loss on Carbajal’s record was a third round knockout defeat at the hands of Wilberth Lopez in 2013.

It’s difficult to know how good Carbajal is because the opposition he’s faced has mainly been weaker unknowns, and this will be the first time he’s stepped up in his nine-year pro career when he meets Leo.

“Hopefully, I’m ready, and I want to go out there and entertain the fans. Yeah, February 5th in Las Vegas at the Mandalay Bay. I thought it was going to be at the MGM on FOX pay-per-view.

“I’m the co-main event. My opponent is Keenan Carbajal. He’s related to Michael Carbajal, the great fighter. He’s pretty tall. Like I said, I never underestimate no fighter.

“People might say it’s going to be an easy fight. Every fighter, I respect. I know they have hands, and they’re going to be dangerous. Anything can happen in boxing, and I’m going to go out there and give a good fight.

“I never see any fighter as an easy fight. Every fighter for me is hard. I go out there. They’re training as hard as I am, so I give them the respect. Anything can happen. They have hands, and they’re fighters. So I’m going to go out there and do my best.

There’s nothing wrong with Santa Cruz taking a long layoff after the way that he was knocked out by Tank in his last fight.

Given how Santa Cruz was beaten, it would be wise for him to revert to the boxing he used to defeat Abner Mares for the first time in their fight in 2015.

When Santa Cruz chooses to box, he’s outstanding and looks like an entirely different fighter. He doesn’t get hit as much, and he controls his fights quite well with his jab and left hooks.

Leo is not overlooking Carbajal

It doesn’t matter that Santa Cruz isn’t overlooking Carbajal. If he chooses to go to war with this guy, as he’s saying he will, he could get caught with something big.

The 30-year-old Carbajal is younger than Santa Cruz, and he’s not had all the vicious wars against A-level fighters like he has.

“I respect every fighter that goes into the ring because they come to fight,” Santa Cruz continued. “They come to leave everything in the ring, and you never know what’s going to happen.

“My job is to train really hard and go and do my best. If the fight comes easy, good for me. If the fight is hard, the fighter comes hard too. So I respect every fighter.

“He’s not going to move around, so that’s going to make for a good fight. We’re both going to be in there trading punches, and it’s going to be a great fight for the fans. That’s what the fans love.

“Me, I can do that. I can box, I can move and hit and try not to get hit and move,” said Santa Cruz in making it clear that he’s capable of using his boxing skills if need be.

“I’d rather get hit to give the fans [a great fight]. I don’t care to sacrifice getting hit. If I go out there and move, they’re going to go, ‘Ah.’ I think they’re more excited when we’re both getting hit.

“If I throw and move, I think they might get bored. So I want to make it fun for them. Hopefully, the fans are excited to see me back in the ring,” Santa Cruz said.

It’s probably not a good idea for Santa Cruz to mix it up too much with Carbajal because if his punch resistance isn’t the same from his KO loss to Gervonta, he could find out the hard way.

“They want to see me fight, and I’m going to go out and do a great show for them,” Santa Cruz said. “After the Tank fight, I got a lot of love from the fans. They said, ‘You were doing a great fight, so that motivated me.

“It gave me the strength to come back and continue fighting and give them a great fight. That’s what I love to do. As they say, it doesn’t matter if you lose. As long as you give a great fight and you come back again strong, that’s what matters.

“The main card is going to be a great fight,” said Santa Cruz about the headliner between Keith Thurman and Mario Barrios. “Barrios is a great fighter. His advantage is he’s moving up in weight.

“Thurman is a natural [welterweight], and he’s really strong. It’s going to be a really great fight, but if Thurman catches him, he can hurt him.

“But Barrios is a warrior, he comes to fight, and he’s going to leave everything in the ring. So it’s going to be a great fight,” said Santa Cruz.

Thurman, 33, hasn’t fought in close to three years, and he’s not performed at a high level since his fight with Shawn Porter in 2016.

Now, after three years out of the ring, Thurman has decided to take a risk for the sake of money by fighting a dangerous Barrios, who is only 26 and very much in his prime.

If Thurman runs out of gas against Barrios after six rounds like he did in his last three fights with Manny Pacquiao, Josesito Lopez, and Danny Garcia, he could get stopped.

Who Was the Best of the Best in Ali, Frazier, Holmes and Tyson! »