The Rise & Rise of Terri Harper 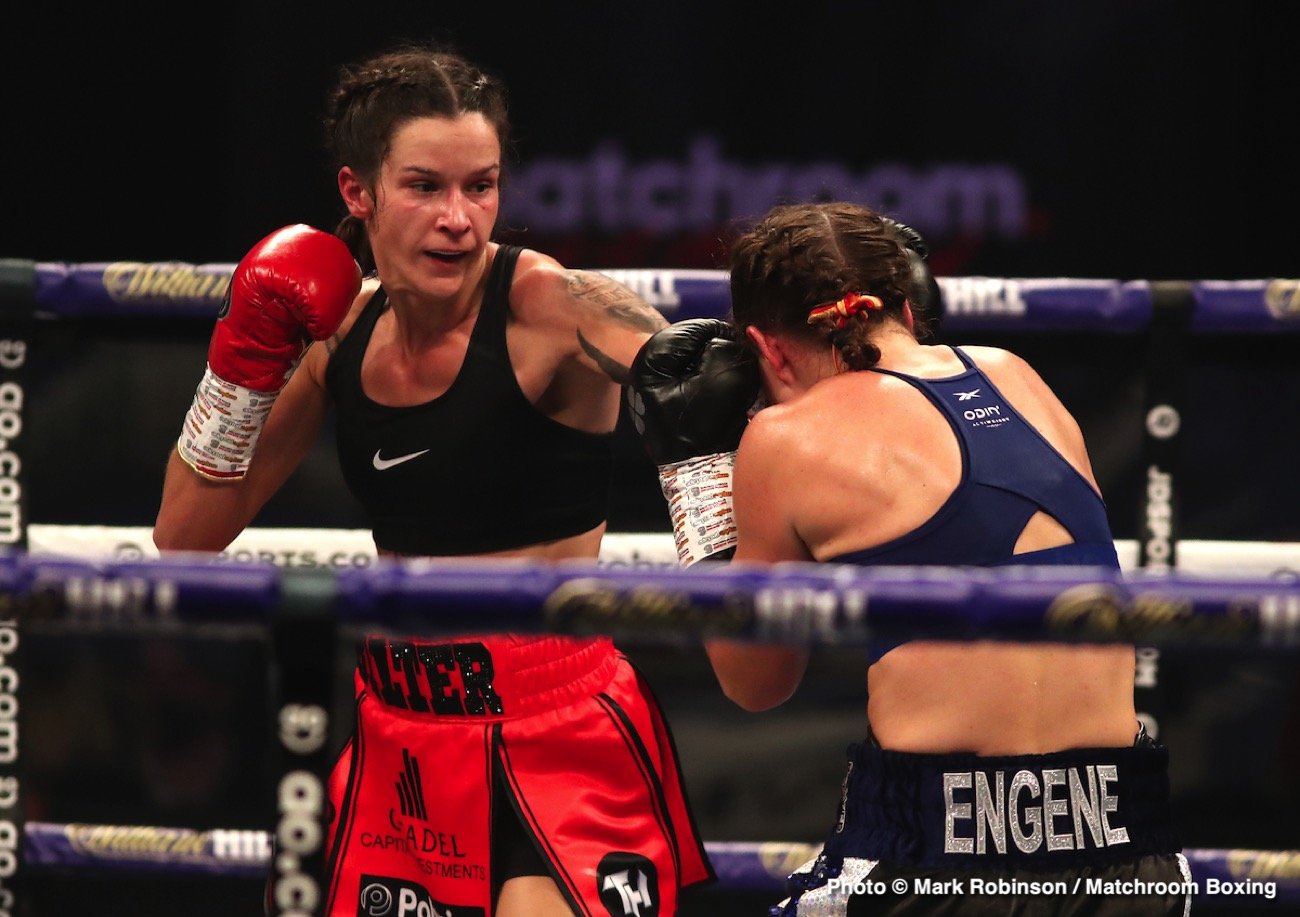 By Ian Aldous: This Saturday night, one of Britain’s finest and most popular fighters returns to action after almost exactly a year away. Terri Harper (11-0-1) co-headlines with Kid Galahad, at the Sheffield Arena, as the two Yorkshire talents grasp the mantle from Sheffield’s longtime main-event attraction, Kell Brook.

The 25-year-old looks to defend her IBO & WBC 130-pound world championships against Alycia Baumgardner (10-1). Despite the disappointment of 364 days without doing what she does best, the previous 18 months had been a whirlwind of world titles and breakout wins that saw her star rise exponentially.

The summer of 2019 saw Harper top the bill and sell out the Rotherham Magna in her maiden shot at world glory. South Africa’s Nozipho Bell, who’d never been knocked out, was despatched impressively inside eight rounds. That win not only earned her the vacant IBO world crown, but it also secured a promotional contract with the powerhouse that is Matchroom Boxing.

She went on to score a unanimous decision, just four months later, against the woman who had shockingly knocked out Natasha Jonas, Viviane Obenauf. The win in Manchester illustrated her qualities against ever-rising levels of competition. After all, she had only competed in nine professional contests by this point. 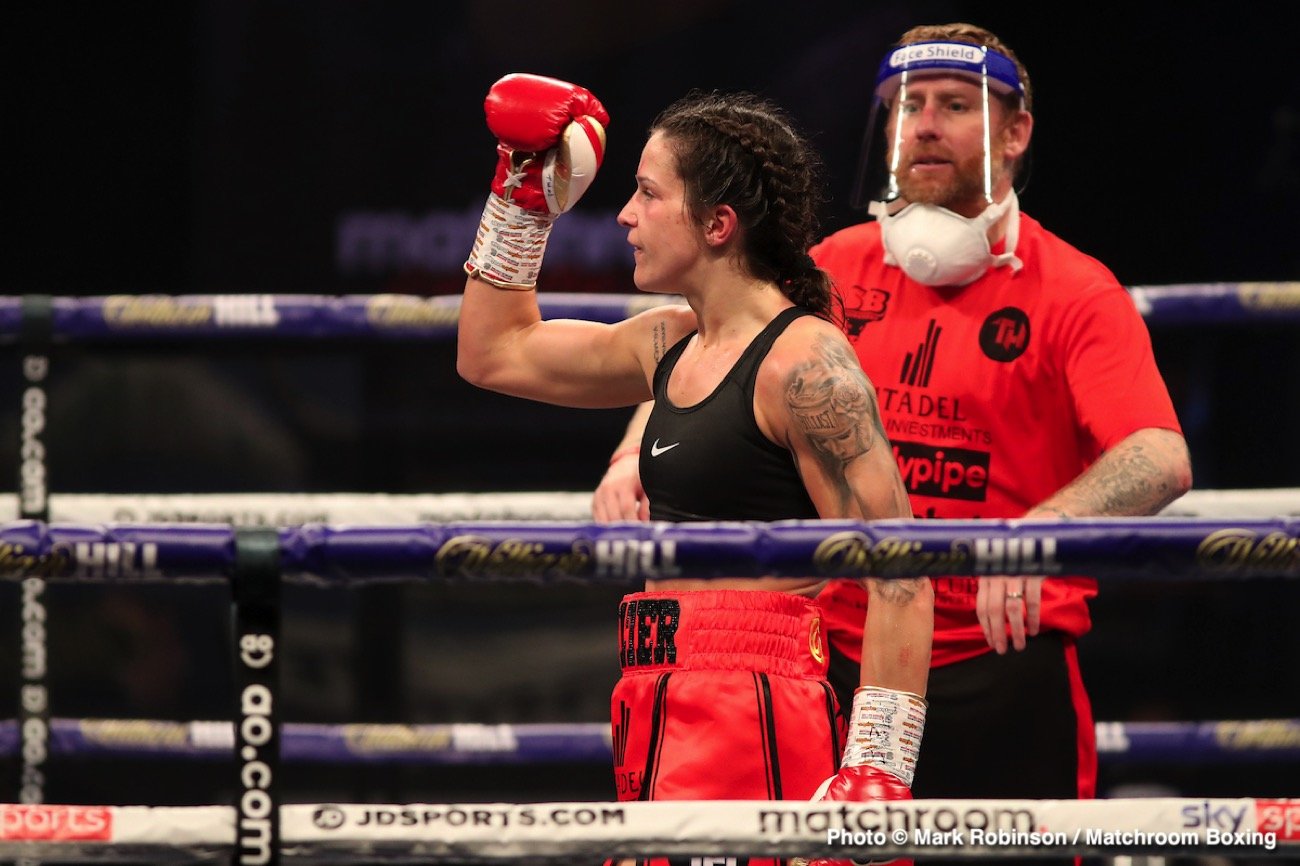 The pugilist from Denaby Main continued to pursue the best opposition possible, and Eddie Hearn was able to deliver. The WBC’s super-featherweight titleholder, Eva Wahlstrom traveled to Sheffield to battle Harper in a unified world title clash. The Finn had reigned as champion two-and-a-half years prior to Harper even turning pro, such was the gulf in experience. However, after selling over 1,000 tickets herself, the IBO champion added the WBC belt to her collection, dropping Wahlstrom and winning clearly on points. Notably, Harper enjoyed a considerably bigger reaction from the live crowd than main-eventer Kell Brook received.

A new challenge dawned in the summer of 2020. The Coronavirus pandemic was in full swing and a headline fight was needed for night two of Eddie Hearn’s behind-closed-doors Fight Camp series. A battle between Harper and Natasha Jonas was signed, thus the first-ever female world title fight between two British boxers took place that summer. The thrilling drawn bout was viewed as a watershed moment for the growth of women’s boxing.

A rematch between the two has been debated endlessly on Twitter, to this very day. Harper and her manager Stefy Bull signed a contract for the rematch – Jonas didn’t.

As Harper’s fame rose, the quiet and humble superstar became one of the prominent faces for a Sky Sports campaign to promote female sports on the channel.

Less than three months passed before the unified champion was successfully defending her titles again. It was to be bittersweet though, a broken right hand would force the champion to the sidelines despite stopping the undefeated Katharina Thanderz.

With a repaired hand being eased in at Stefy Bull’s gym, the tight-knit team was all set to fight Hyun Mi-Choi in May to unify the IBO, WBC & WBA titles.

In the final spar of camp, Harper re-fractured her hand and was forced to withdraw from the Choi bout. Reportedly, it was literally the final punch of the final spar. Ouch.

Hand injuries in the rearview mirror, now is the time for Terri to showcase her talent to DAZN’s worldwide audience. Alycia Baumgardner has embraced the challenge where WBC mandatory Elhem Mekhaled didn’t. She supposedly turned it down when offered the opportunity, such has been the difficulty of sourcing a suitable dance partner.

Should the unified champion, a considerable betting favorite, navigate her way past the American on Saturday night, there are only two names on her ‘to beat’ list: Hyun Mi-Choi and the WBO & IBF champion, Mikaela Mayer.

Mayer and Harper have been trading barbs on social media for what seems like ages, and long may it continue, if it eventually nets another female mega-fight in 2022.