By William Lloyd: Kell Brook has revealed that he’s signed his portion of the contract for him to face Amir Khan, and he’s waiting for him to sigh-off for their fight to be a reality.

It might be a little too late for Brook and Khan to be fighting for it to make the kind of money that it would have if they’d fought eight or nine years ago when the two were in their physical primes.

The 35-year-old Brook hasn’t fought in 12 months since his fourth round knockout loss to WBO welterweight champion Terence Crawford in November 2020.

Brook looked exceptional for the first three rounds, but Crawford caught him with a sneaky right hook in the fourth round that hurt him. From there, Crawford unloaded with a storm of shots that forced the stoppage.

Brook has been pushing for this fight with Khan for at least a decade, but it hasn’t happened for one reason for another. Most boxing fans believe that Khan didn’t want it and was more focused on trying to get fights against the superstars Floyd Mayweather Jr. and Manny Pacquiao.

“I might have got a fight, I might not have got a fight,” said Kell Brook to iFL TV. “I think I need a massive fight to get involved in it, and I think the fight that everyone wants to see is with the guy [Khan] from Bolton.

“I’ve signed my part of the fight, and he just needs to come forward and sign his part. We’ve got the biggest fight in British boxing, and we’ve signed our bit. Everybody knows this fight needs to happen.

“I’ve done my thing. Let’s see him do his thing, and we’ve got the biggest fight in British boxing. I think the time is now, to be honest with you. I’ve said that before, but who knows with this guy [Khan].

“That’s the only fight that will start me again in boxing. This is no disrespect to [Conor] Benn, but he still needs to build himself,” said Brook in reacting to being told that Eddie Hearn wants to set up a fight between Khan and Conor Benn.

“He [Benn] needs to come through certain hurdles before he can actually demand that kind of fight,” Brook continued. “He’s got to become world champion, and he’s got to be in big fights to get these massive fights.

“I’ve got my stripes, and Khan has got his stripes. We’re both in similar positions in our careers, and it’s time for us to collide together,” Brook said.

We’ll see if Khan signs his portion of the contract, but he may this time.

For Khan, this is his best option available to him to get a big payday because he’s not going to get a chance for big money fighting Errol Spence Jr, Crawford, or any of the other fighters at 147.

Kell has nothing to prove

Of course, I would,” said Brook when asked if he would agree to fight Conor Benn if he were given an enormous offer.

“He’s a young, hungry up-and-coming fighter, and I believe that I’ve got plenty left. I can still go out there and perform, and I think I can still go in there and mix it with the best in the world.

“Of course, there is. What more else do I need to prove?” said Brook when asked if there’s a possibility he might not fight again. “I became world champion, and I boxed the guy that was killing everybody at middleweight [Gennadiy Golovkin].

“So it’s one of them. What else do you want to see me do? I’ve done it all in the game. I think styles make fights like with the fabulous four when you had Duran, Hagler, Hearns, these fighters, and they could all mix it up with each other. Styles make fights.

“I do honestly believe that Crawford with his southpaw style and his sharpshooting, I personally think he’s the best fighter in the world at welterweight until we see this fight this Saturday night.

“I wouldn’t be shocked at all if Porter beat him, but I would lean towards Crawford in that fight,” said Brook.

Kell has had a good career, but unfortunately, things fell apart after his ill-advised fight middleweight champion Gennadiy Golovkin in 2016. Brook suffered an eye injury against GGG and then had a similar injury in his fight with Errol Spence Jr.

Those two fights took the air out of Brook’s career, and he never regained his earlier momentum. 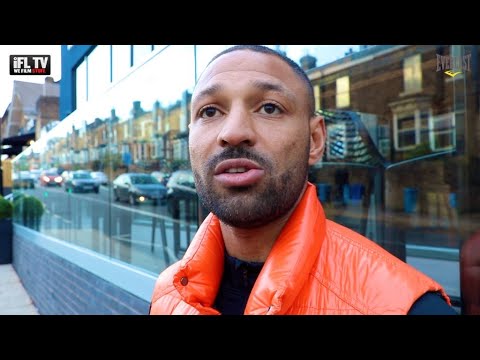 
« The Rise & Rise of Terri Harper

Roman ‘Chocolatito’ Gonzalez vs. Juan Estrada 3 in the works for Jan.22 in California »