Rolly Romero talks about Gervonta Davis fight, expects to fight him in spring

By Dan Ambrose: Rolando ‘Rolly’ Romero broke his silence on his canceled fight with Gervonta ‘Tank’ Davis as a result of sexual assault allegations made towards him recently.

Rolando is predicting that Tank will destroy his replacement opponent Issac ‘Pitbull’ Cruz by an early knockout on December 5th, and then he’ll press for his mandatory spot with the World Boxing Association to force Gervonta to fight him.

Rolly believes that he’s going to knockout Tank Davis when the time comes for him to get his title shot. Romero feels he’s got the goods to do a number against Tank to take his title away from him.

There’s too much money for Tank Davis and Mayweather Promotions to make from a fight with Rolly Romero for it not to be rescheduled. Even if Tank loses to ‘Pitbull’ Cruz, he’ll eventually fight Rolly because they’re with the same promoters, and boxing fans want to see the fight.

“Man, I’ll be honest with you. It f****ing sucks, but it’s okay because something better is going to happen down the line regardless, and I’m going to get him down the line,” said Rolando ‘Rolly’ Romero to Fight Hub TV on his belief he’ll fight Tank Davis still in 2022.

“You’ll see, I’m not going to stop pressing on the gas pedal. I’m going to get him,” said Rolly about the Gervonta fight still happening for him soon.

“He’s going to go over there [Staples Center in Los Angeles on December 5th] and he’s going to knockout ‘Pitbull’ Cruz in a round or so. Now I’m going to get him and knock him out in a f****ing round.

“That was the original opponent he was supposed to get. So I’m the one that activated the [WBA] mandatory, so it’s not much different,” said Rolly when asked what he thinks of Tank Davis fighting Isaac ‘Pitbull’ Cruz on December 5th instead of him.

“Spring,” Rolly Romero said when asked how soon he believes he’ll get a fight against Gervonta Davis. “I’m still the mandatory, so they got to make that fight happen regardless.

“Spring 2022,” said Rolando Romero when asked how soon he’ll be fighting. Nah, I’m going to activate the mandatory and keep pressing that s*** and knock him the f*** out. It’s as simple as that,” said Rolly about Tank Davis.

Spring is just around the corner, so should be seeing Rolando back in the ring soon. It sounds like Rolly won’t be taking a tune-up fight to get him ready for Tank, but maybe he feels it’s not necessary.

With Rolly’s awkward fighting style, size, huge power, he’ll have the chance of beating Tank no matter how long he’s out of the ring. 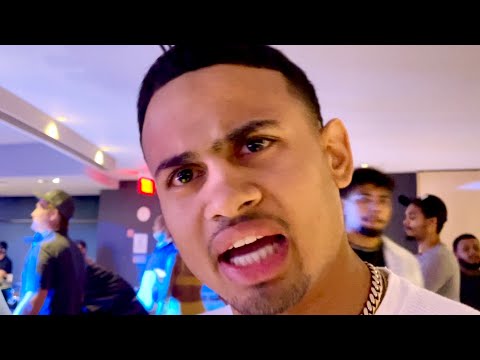