Arum feels that it would be “unwise” for former IBF/WBA/WBO champion Joshua (24-2, 22 KOs) to steam straight into a rematch with Usyk right now. Instead, Joshua should step aside and let Usyk (19-0, 13 KOs) fight Fury next.

In the time, Joshua can take an “interim fight” while Fury and Usyk are battling it out for the undisputed heavyweight championship. Once Joshua gets past his interim fight, he can face the winner of the Usyk vs. Fury fight for a chance to become the undisputed champion.

According to Arum, Joshua isn’t required to ask his promoter, Eddie Hearn of Matchroom Boxing to be given the green light to step aside. Joshua will be the one to decide whether to step aside. He doesn’t need Hearn to tell him whether it’s okay to make the move to let Fury fight Usyk next.

What Arum is trying to do with this move is to save Joshua from suffering a second loss to Usyk, which would basically sink what’s left of his plunging career.

A second defeat for Joshua to the 2012 Olympic gold medalist Usyk would be AJ’s third loss in his last five fights and a sure sign that his career as a major player is over.  Arum wants to save Joshua from himself because he’s about to make a ham-handed move by choosing to go straight into a rematch with a fighter that schooled him badly last September.

Arum wants Joshua to step aside

“I think he [Anthony Joshua] really needs a new trainer because obviously fighting Usyk the way he did, they could fight a hundred times and Usyk would beat him a hundred times,” said Bob Arum to ESNEWS.

“So maybe a new trainer [for Joshua], but I think it would be maybe wise to not force a fight with Usyk right away and let Usyk fight Tyson Fury and the winner to fight Joshua and Joshua to have an interim fight in the meantime.

“That’s what I hope and that’s the sensible thing. Whether it works out that way or not is not dependent on me, it’s dependent on Joshua. F*** Eddie Hearn. He has nothing to say about it.

We’ll see if Joshua is going to be stubborn about it and ignore Arum’s helpful advice about stepping aside. If Joshua is willing to listen to Arum, he’ll see the logic of stepping aside and doing the reasonable thing.

It won’t help Joshua by him getting a new trainer because his stamina and chin problems would still there preventing him from beating Usyk or Fury. 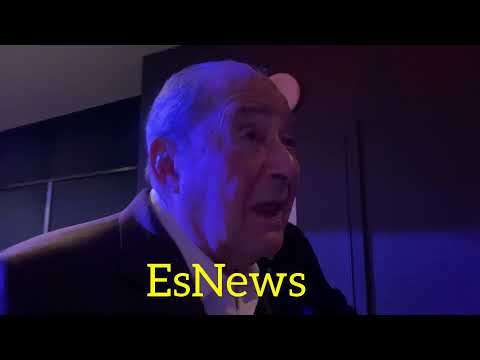 
« Bob Arum wants Vasily Lomachenko vs. Shakur Stevenson after both win their next fights

Rolly Romero talks about Gervonta Davis fight, expects to fight him in spring »