There’s talk that Vergil Jr. could be leaving his longtime trainer Robert Garcia and joining up with Canelo Alvarez’s coach Eddy Reynoso in San Diego. Some boxing fans are making a big deal out of it, but I don’t know it’ll matter much.

Vergil will still have the same problems with Reynoso as his coach as he would with Robert Garcia when he eventually faces Crawford or Jaron Ennis.

Ortiz, 23, wants to get back in the ring against one of the aging lions like Keith Thurman or Danny Garcia so that he can use them as practice to get ready for WBO 147-lb champion Crawford.

In that fight, Ortiz was staggered and almost knocked out in the early rounds before returning to stop Kavailauskas in the eighth round in an exciting war.

“We have a date in mind and an opponent in mind but nothing set stone yet,” said Vergil Ortiz Jr. to Fighthype when asked when he’ll be fighting next. “I have nothing to give away, but I should be fighting pretty soon. 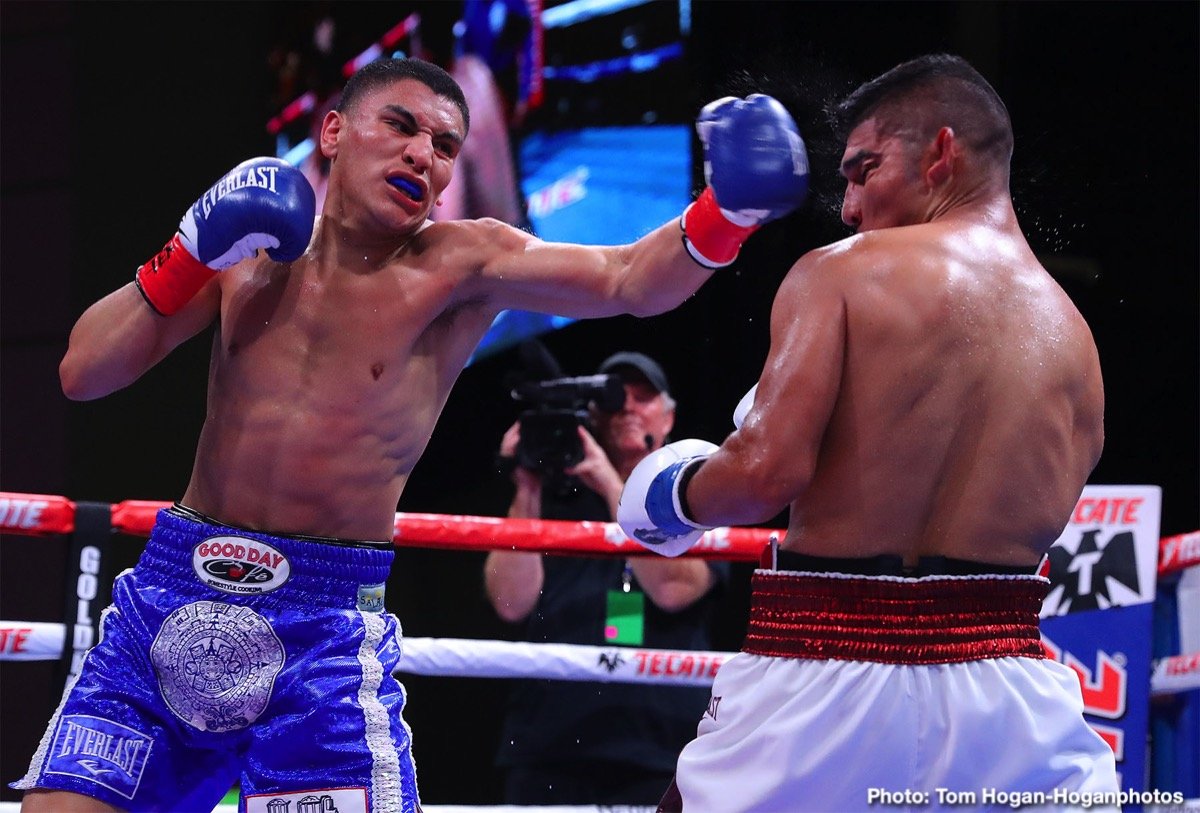 “Possibly,” said Vergil Ortiz Jr. when told by the interviewer Lance Pugmire that he’s hearing early January for his next fight. “I fought twice, and we were looking for three, but if it’s early January, then that’s pretty good too.

“I’m not 100% sure,” said Ortiz about who he’ll fight next. “Honestly, the ones that catch my eye are the fighters that I’ve kind of been asking for. Danny Garcia and Keith Thurman.

“If I could make a fight next to prepare me for a world title fight, if I could get through them are those two fighters. They’re great fighters. As I said before, Keith Thurman was my favorite welterweight before I moved up to welterweight.

“I’d love to share the ring with him, and if not him, then I’d like to get Danny Garcia. I don’t know what’s going on with them. I heard Danny Garcia is moving up. Keith Thurman hasn’t fought in so long. I really don’t know,” said Vergil Jr.

It’s pointless for Vergil to be wishing for former WBA/WBC welterweight champion Keith ‘One Time’ Thurman or Danny Garcia to fight him because that’s not going to happen.

Thurman and Danny Garcia rarely fight nowadays, as both of them are in their early 30s and have made millions during their careers.

They seem to be part-time guys looking for big money fights and not taking risky matches against young lions like Vergil Ortiz Jr. or Jaron Ennis.

For Thurman’s sake, he hasn’t fought in 2 1/2 years, and I’d be surprised if he ever fights again. At this point, Thurman seems to waiting around for a big-money cash-out against Errol Spence Jr. or Terence Crawford. If Thurman doesn’t get either of those fights, he’ll likely quietly retire.

Knowing Thurman, he won’t officially announce his retirement, and he’ll continue sitting on the sidelines and be forgotten by boxing fans.

“I think it can,” said Vergil Ortiz Jr. when asked if a fight between him and Crawford could take place. “I really don’t think I have to do anything.

“If he’s already saying my name, I don’t have to be knocking on the door anymore. It sounds like it’s already open.

“Honestly, I do, I really do,” Vergil Jr. said when asked if he’s ready for Crawford. “It’s not like I have a hunch or anything like that. I just feel like I’m ready and definitely have a chance of beating him [Crawford].

“Just do what I always do,” said Ortiz Jr. on what he needs to do in his next contest to prepare himself for a clash with Crawford better. “Just fight a good smart fight. I love to be fan-friendly.

“I watch boxing but not a whole lot because there’s a lot of boring fighters out there. I don’t want to be one of those fighters, but at the same time, I want to do it smartly.

“People want to watch me, but they’ll be able to watch me for a long time because I’m still in the sport,” said Vergil Jr.

Although Ortiz Jr. made it exciting in those two fights, he didn’t dominate either of them enough to say that he’s anywhere near ready for Crawford.

The 23-year-old Vergil Jr. might be young and strong enough to wear down the soon-to-be 35-year-old Crawford in a war of attrition.

When you get to the mid-30s like Crawford, and you’ve been fighting weaker opposition, for the most part, your entire 13-year professional career, he could fall apart in a fight against Vergil.

Crawford is like an old car with over 200,000 miles on it.  Yeah, it’ll probably make it up a steep him, but if you take it for a long 500-mile ride, something could happen. Vergil Ortiz Jr. could push Crawford, causing him to overheat or blow a gasket.

All those years of weak opposition and coupled with advanced age could be too much for Crawford. It’s not likely that Crawford will fight Vergil Jr. in 2022.

At best, we probably won’t see Crawford fight Ortiz Jr. until 2023. By that time, Crawford will be nearing 37 and definitely not young.

If Crawford is just going to run around the ring, he might win an ugly decision, but I wouldn’t like his chances of beating Vergil Ortiz Jr. or especially not Jaron Ennis in a war.

Crawford will be too old by then, and it’s very late in his career to finally face elite-level opposition.

“As someone that is watching him from the outside, I definitely pick him easy but as far as him being in there and actually making the decisions, I would say it’s going to be a competitive fight,” said Vergil Jr. on tonight’s Canelo Alvarez vs. Caleb Plant match in Las Vegas, Nevada.

“People like Canelo fight two times a year, but he doesn’t want to be that guy. He wants to stay active, and I admire that. When you’re active like that, you’re in the gym. Canelo is in the gym regardless all the time, and so am I.

“But when you’re active like that and having fights back to back, you really don’t lose any rhythm. You don’t lose a step, and you’re right on track. He’s a huge role model,” said Vergil Ortiz about Canelo. “He’s a great fighter, and he’s arguably the greatest Mexican fighter ever to live.

“He’s so great defensively, and he’s explosive, and he has a great ring IQ,” said Vergil Jr.

“I think Porter is going to do what he does best and try to rough him up and try to get him out of his element,” said Ortiz Jr. on the Terence Crawford vs. Shawn Porter fight on November 20th.

“So I think it’s going to be a pretty good five or six rounds, and then Crawford is going to start getting his rhythm. I think that’s one way it’s going to play out.

“Crawford is going to win in both of these ways, I’m going to say, or I think Crawford catches him coming in early.

“Porter is so focused on his offense much of the time. He just comes running in, and I think he might run into a punch,” said Vergil Ortiz.

It’s not a good sign that Porter has arguably lost two out of his last three fights against Yordenis Ugas and Errol Spence Jr and is coming off a year layoff when he faces Crawford on November 20th.

Porter didn’t look good against Ugas and even struggled against Adrian Granados in 2017. If Errol Spence Jr. had chosen to box Porter in their fight in November 2019, he likely would have easily beaten him.

Crawford will likely school Porter and win a lopsided 12 round unanimous decision. Crawford probably won’t knock Porter tout because that would require that he get in the trenches and stay there all night, and he’s not going to want to do that.

There’s a lot of Shakur Stevenson in Crawford with his tendency to use the dull pull-back style of fighting to avoid getting hit.

To produce knockouts against good fighters, Crawford can’t use his pull-back style because he doesn’t hit hard enough. 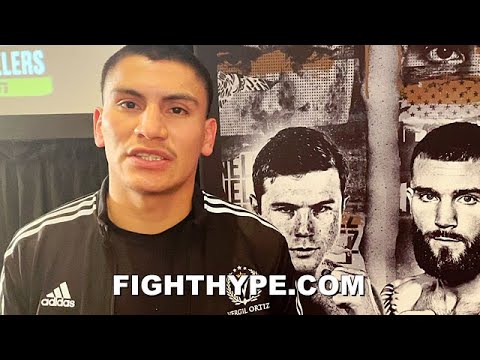 
« Rolly Romero talks about Gervonta Davis fight, expects to fight him in spring