Crawford-Porter will air LIVE AND EXCLUSIVELY ON ESPN+ PPV – Fans outside the US and UK can watch the fightcard live on FITETV – CLICK HERE for ESPN+ Order Event Page!

Before Crawford and Porter touch gloves, the full suite of fight week events will stream live on Top Rank’s YouTube, Twitter and Facebook pages, in addition to various ESPN platforms. 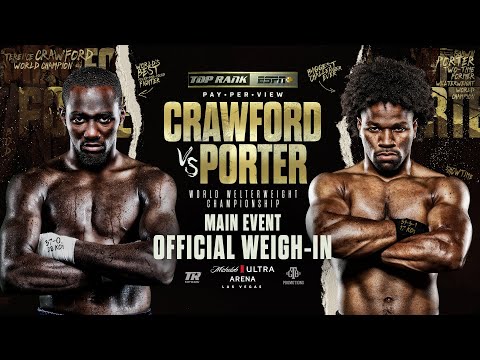 Presented by Top Rank and TGB Promotions, Crawford-Porter will be a Top Rank PPV exclusively on ESPN+ in the United States at 9 p.m. ET/6 p.m. PT. Limited tickets are still available and can be purchased by visiting AXS.com.

Pound-for-pound star Terence “Bud” Crawford has called out the welterweight superstars for years.  His long wait for a legacy-defining fight is now over. Crawford will defend his WBO welterweight world title and unbeaten record Saturday, Nov. 20 against two-time welterweight champion and WBO No. 1 contender “Showtime” Shawn Porter at the Michelob ULTRA Arena in Las Vegas.

Promoted by Top Rank, in association with TGB Promotions, Crawford-Porter will be a Top Rank PPV exclusively on ESPN+ in the United States at 9 p.m. ET/6 p.m. PT.

“This is a fight that reminds me of all the great welterweight battles of the 1980s and 90s, two prime fighters unafraid to tackle the biggest challenge available to them,” said Top Rank chairman Bob Arum. “Terence has wanted a challenge like this for a very long time, and I am confident he will rise to the occasion. Shawn Porter, however, is not an easy night for any fighter.”

“I’ve been calling out the top welterweights since I moved up to 147 in 2018, and I’m excited that Shawn stepped up,” Crawford said. “This fight will bring out the best in me and showcase parts of my game that the world hasn’t seen yet. On November 20, I will silence my doubters and prove that I am the best welterweight in the world.”

Porter said, “I’ve wanted this fight for a long time and now my patience has paid off. Throughout my career, I’ve taken on the best and proven myself as a man who gives 100 percent in everything I do. Terence Crawford is a great, versatile fighter who is very athletic just like myself. We are the two best welterweights in the world, and on November 20, we get a chance to prove who is the best. Fight fans can expect a great show that night and, with this victory, I will cement myself as the best welterweight of this era.”

Matt Kenny, Vice President, Programming & Acquisition, ESPN added, “We are thrilled to present this blockbuster welterweight showdown exclusively on ESPN+ PPV. This is the kind of fight that boxing fans dream of and we are looking forward to a tremendous event on November 20.”

Crawford (37-0, 28 KOs), the three-weight world champion from America’s heartland, Omaha, Nebraska, has made four defenses of his world title since knocking off Jeff “The Hornet” Horn in June 2018. A mainstay near the upper rungs of the mythical pound-for-pound rankings, Crawford has been a world champion since March 2014. He defeated WBO lightweight world champion Ricky Burns on enemy soil in Scotland and made his first title defense in front of the Omaha faithful with a ninth-round stoppage over Yuriorkis Gamboa. Crawford became the first man in the four-belt era to become the undisputed junior welterweight champion, and he is 4-0 with four knockouts since moving up to welterweight. His knockout streak of eight dates back to July 2016, when he notched a one-sided decision over Viktor “The Iceman” Postol at MGM Grand Garden Arena to unify two of the junior welterweight world titles. Crawford is coming off last November’s fourth-round knockout over Kell Brook inside the MGM Grand Las Vegas Bubble.

Porter (31-3-1, 17 KOs), a 13-year pro from Akron, Ohio, first tasted championship glory in December 2013 when he outfought the previously undefeated Devon Alexander to win the IBF welterweight title. He knocked out two-weight world champion Paulie Malignaggi in his first title defense before Brook edged him by majority decision in August 2014. Over the next seven years, Porter continued fighting the welterweight elite, becoming a two-time world champion in 2018 when he toppled Danny Garcia to win the WBC welterweight title. He defended that title against future Manny Pacquiao conqueror Yordenis Ugas before taking Errol Spence Jr. to the limit in a September 2019 title unification tilt. After dropping a split decision to Spence, Porter regrouped with a one-sided decision over Sebastian Formella in August 2020 to set up the Crawford showdown.