By Jim Calfa: Amir Khan says he saw bitterness, envy and hatred in the eyes of Kell Brook during today’s kickoff press conference for their fight on February 19th on Sky Box Office.

The former IBF/WBA 140-lb champion Khan feels that Brook is jealous of his success inside and outside the ring, as he’s not been able to achieve the same things in his career and life.

It doesn’t matter to Khan what the former IBF welterweight champion Brook (39-3, 27 KOs) thinks of him. On February 19th, Khan says he wants to “punch right through his face” when he gets Brook inside the ring at the Manchester Arena in Manchester, England.

Khan, 34, has done well for himself financially during his 16-year professional career. The combination of Khan’s ring earnings and his outside business interests has left him a VERY wealthy man at a young age.

According to Celebrity Net worth, Khan (34-5, 21 KOs) has a net worth of $40 million, which pales in comparison to the $3 million that they list Brook’s net worth.

Brook, 35, would have made a lot more money now in his 17-year professional career if not for two eye injuries he suffered, and his subsequent long layoffs from the sport.

“I wanted to make sure it was on a massive platform like Sky,” said Khan to iFL TV on his fight with Brook. “Look, Eddie [Hearn] offered more money for this fight.

“I don’t know why Eddie is a little bitter now saying, ‘It’s not a good fight.’ He offered more money than Sky. I said ‘No’ to him because Sky has a bigger platform and it’s a fight that I want everyone to see.

“A lot of people thought this day was never going to come, but we’re here now and I’m glad that it’s done. I think this fight has come at the right time.

“It’s been a long time since we’ve stood eye to eye, and I could see the anger in his eyes,” said Khan about Brook. “I could see how angry he was and how much he wanted it like myself.

“With Kell, you could see how bitter he was. He was hating, and that’s because he’s seen my life and for me.

“He kept bringing up the celebrity life I’m living and the TV shows, and that’s obviously because of how hard I’ve worked in the sport of boxing that has gotten me to that position.

“If I hadn’t done well in boxing, no one would have wanted to see me outside of the boxing ring. Look, I’m a likable person. He [Brook] envies that, he hates that. I don’t know why.

“He didn’t achieve that because he didn’t get that, I’m sure he wouldn’t have said no to that.

“It was just one of those things that fell in my lap and the person I am, and that’s why I got it,” said Khan about his own show.

If Brook is bitter about now having achieved as much as Khan during his career, this fight isn’t going to change anything. It would take many years for Brook to catch up to where Khan is right now, and he doesn’t have a lot of time left before he retires.

“No, no, no,”  said Khan in reacting to people who think he and Brook are too old. “Me and Kell are 35, and you just saw Crawford having a huge performance against [Shawn] Porter, who is one of the pound-for-pound best fighters in the world and he’s [Crawford] 35 as well.

“How can you say a 35-year-old man is done? We both speak well and we both feel good. I’ll be in the best shape ever.  No, this fight is not too late. If people think it’s too late, it might be for him, but not for me.

“He’s out of shape,” said Khan about Brook looking chunky at today’s press conference. “Look at how good and slick I look. I fit in my tailored suit. A little overweight, he was, so he needs to get in shape. I hope he’s in shape for the fight,  so let’s see.

“I’m carrying on with my career,”  said Khan about his plans for AFTER the Brook fight. “35 is a young time to retire for boxing. It’s just how Covid has kicked in.

“Maybe a couple of more years. It was Covid and I had a hand operation, so there are a few more years left. Maybe these little breaks have been good for me where I’ve had a nice little break,” Khan added.

The boxing public is basing their opinions on the Khan vs. Brook fight being too late because neither fighter is relevant at 147 or 154.

Khan hasn’t fought in almost three years, and Brook has been out of the ring for a little over a year. Neither fighter has beaten a high-level opponent in many, many years.

Gone are the days where Khan was beating the best at 140, and Brook defeating top level opposition.

Khan: I’m going to give Brook such a beating

“It’s not going 12 rounds, and I’ve going to give him such a beating that he’s never had before,” said Khan when asked for a prediction on his February  19th fight against Brook.  “He’s going to give up.

“He’s going to remember this beating, no messing about. The respect goes out the window when we step inside that ring.

“It’ll be good to put him in his place now. All that jealousy he’s had about me, he’s envied me. I’m going to put him in the right place where he needs to be where he belongs.

“Yeah, Crawford’s team, BoMac, and we’re going to be training in Nebraska and then going to move to Colorado Springs. I’m looking forward to it. It’s going to be good and hard, I know that for a fact.

“It’s going to be on Sky Box Office on February 19th in Manchester Arena. Guys, make sure you’re there,” said Khan. 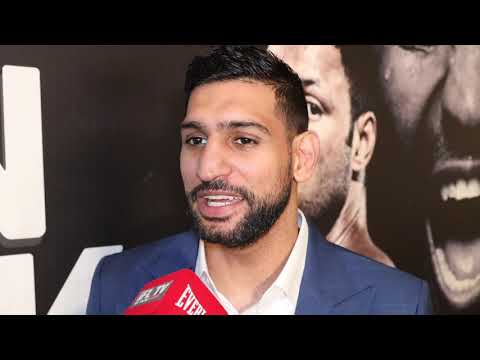