Joshua, 31, says he’d like to fight the winner of this Saturday’s fight between Fury and Deontay Wilder next if possible. If Joshua did take the fight next, he would be going into it as a challenger and not a world champion.

Fury notes that Joshua previously had said that his focus was on fighting for titles and that he wanted to become the undisputed heavyweight champion.

Now all of a sudden, Joshua (24-2, 22 KOs) has changed his tune after losing his three belts in a 12 round unanimous decision loss to Oleksandr Usyk on September 25th.

After that loss, Joshua is supposedly willing to fight Fury without any titles, and Tyson doesn’t buy into what he’s saying.

“This is coming from a guy who’s got no belts now. Before, it was, ‘I don’t care who the fighter is; it’s all about the belts and undisputed.’ He contradicts himself quite a bit,” said Tyson Fury to BehindTheGloves about Joshua, saying he’ll fight him without any belts.

If Fury wins on Saturday against Wilder, he should call Joshua’s bluff by announcing that he’ll fight him next. By doing that, Fury would pressure Joshua to either back up his words of wanting to fight Fury without belts or look bad.

Joshua has already activated his rematch clause for his fight with IBF/WBA/WBO champion Usyk (19-0, 13 KOs) for early 2022, so he’s not going to walk away from that match to fight Fury.

Joshua’s pride is now on the line after losing to Usyk, and he’s not going to be able to move on until he at least tries to avenge his embarrassing loss from last September.

As for Fury, he’s got a full plate in front of him against a highly motivated former WBC champion Deontay Wilder (42-1-1, 41 KOs), this Saturday night at the T-Mobile Arena in Las Vegas.

With all the bragging and self-promoting Fury has done about himself, he’s going to look silly if he loses on Saturday against Wilder, especially if he’s knocked out in the process.

“I think fighters of the past were different men than today,” said Fury. “Not including myself, because I’m cut from an old cloth like they are. Fighters today making excuses, I don’t think they would live with the old guys, not at all,” Tyson said.

“There’s nothing stopping me on the night, and you know I can get up from his punches because I’ve done it twice before,” said Fury to Top Rank on his fight against Deontay Wilder on Saturday. “He doesn’t have anything I’m scared of. I’m not scared of anybody on Earth. 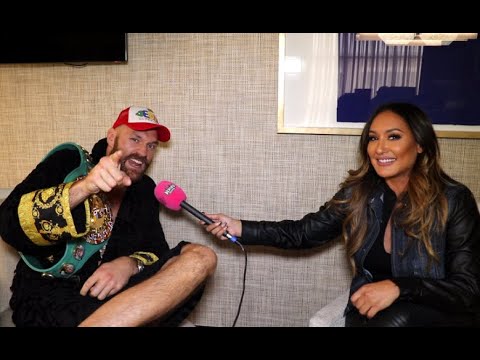