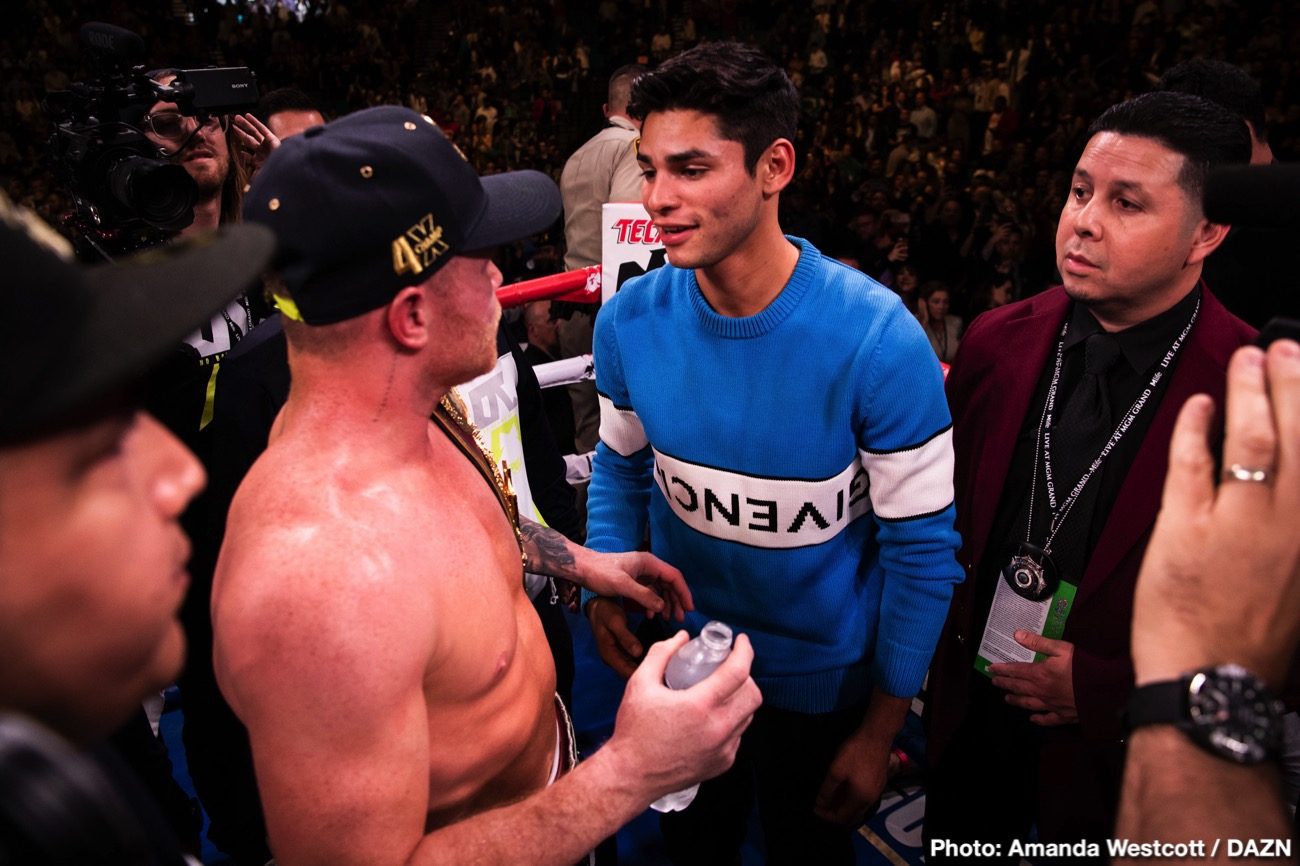 By Dan Ambrose: Canelo Alvarez ripped into lightweight contender Ryan Garcia on Thursday, criticizing him for not being “100% dedicated” to improving by coming to the gym to train.

Canelo says Ryan is wasting his potential, and he wants to see more dedication from him. Ryan trains at the same gym with Canelo under the guidance of Eddy Reynoso, so whatever he does or, in this case, doesn’t do, is seen by Alvarez.

Ryan does a lot of social media stuff, and that might be one thing that is getting in the way of him staying in the gym, training, and fighting often. It’s strange obviously for a young contender to be fighting only once in 2021 like Ryan.

Interestingly, Ryan has made a tremendous amount of money during his career without ever fighting for a world title. That could be one reason for the lack of dedication that Canelo is seeing from him. According to Celebrity Net Worth, Ryan Garcia’s net worth is $10 million.

With that kind of money, it’s not surprising that Ryan isn’t showing the same type of hunger that Canelo had earlier in his career.

The Mexican superstar Canelo says that when he was first starting his career out, he was sometimes fighting 15times in a year.  In contrast, the undefeated 23-year-old Ryan (21-0, 18 KOs) has fought ONLY once in 2021, beating Luke Campbell earlier in January.

Ryan Garcia’s promoters at Golden Boy had a fight scheduled for him against Javier Fortuna on July 9th, but he pulled out of the match due to a well-publicized bout with anxiety.

Recently, Golden Boy had plans for Ryan to face Joseph ‘Jojo’ Diaz Jr. on November 27th on DAZN, but a wrist injury resulted in King Ry pulling out of the contest. WBC lightweight champion Devin Haney is now expected to fight Jojo Diaz Jr. next on December 3rd.

“Look, Ryan has a lot of talent. But in my eyes, he’s wasting a lot of time and wasting his talent. I look at him and don’t see him 100% dedicated and, to us, that’s a bad signal,” said Canelo to Complex in criticizing Ryan Garcia’s lack of dedication.

There are a lot of boxing fans that believe that Ryan doesn’t have his head in the sport that he needs for him ever to be successful. He seems flighty and unable to stay on course when he talks about wanting to fight different guys.

It’s a bad sign that they need to remind Ryan Garcia to come to the gym to train, as that shows that he’s not focused the way he needs to be for him to improve.

“We always remind him to come to the gym,” Canelo said of Ryan Garcia. “To train and learn. You’re learning day-by-day, very minimum fighting five times a year. When I was beginning, I did 15 fights in one year.

“Definitely, he needs to be a little more dedicated,” said Canelo about Ryan Garcia lacking dedication.

You got to assume that if Ryan isn’t showing dedication now about his career, it’s only going to get worse as he ages, especially once he starts losing. Ryan obviously will fail sooner or later if he lacks dedication, and once that happens, he might result in more anxiety.

Along with anxiety, you can expect Ryan to spend even less time in the gym. It’ll be a vicious downward spiral for King Ry, likely ending badly.