By Scott Gilfoid: Mauricio Lara states that he wants Josh Warrington to keep his promise about retiring from the sport should he lose tonight in their 12-round rematch in the main event at the Headingly Rugby Stadium in Leeds.

The young gun Lara (23-2, 16 KOs) predicts tonight’s fight won’t go the distance or even the nine rounds that it did last February when he blasted the overconfident Warrington out in London, England.

After that fight, Warrington justified his losing the fight to the 23-year-old Lara, saying he had overlooked him. Warrington maintains that he didn’t take Lara seriously, as it was only supposed to be a “stay busy” fight and not one that he had any chance of losing.

Warrington says he was one of the best if not the best fighter in the featherweight division at the time, so there would be no reason for him to be concerned with Lara.

Basically, it was a pathetic cop-out on Warrington’s part to enable him to evade the truth of what had happened to him on the night when the Mexican warrior dropped him twice before his corner wisely yanked him out in the ninth.

Lara says he hopes Warrington is prepared this time around and realizes what he’s facing inside the ring. He doesn’t want Warrington to continue with the fabrication that he didn’t take him as seriously as he should.

“We’re in his backyard, but those fans don’t go into the ring with him,” said Mauricio Lara to Boxing Social on fighting Warrington in front of his hometown crowd in Leeds.

“Those fans have all my respect in the world. The person I don’t have respect for is Warrington. He’s looking for revenge, but he won’t get that. It’s part of the game, but I don’t like what he did, and you’re going to see that when I get my hand raised.

“I think it’s mind games, really. The British like mind games,” said Lara when asked why Warrington’s demeanor changed during Friday’s weigh-in, going from being polite to aggressive.

If Warrington is going to retire if he loses tonight to Lara, he’s going to have to convince his promoter Eddie Hearn that’s the direction he wants to go in.

Hearn is already talking about the worst scenario in which Warrington gets blasted into oblivion again by Lara, and he doesn’t see why he shouldn’t continue his carer, albeit at 130 [super featherweight] rather than 126.

Heck, Warrington can’t take the power of a fighter like Lara at 126. How does he hope to handle the shots from fighters at 130 like Miguel Berchelt, Oscar Valdez, and Jamel Herring?

“As I’ve said before, we’re totally prepared to go the twelve rounds, but it won’t go to that,” Lara continued. “It won’t go the distance. I don’t even think it’ll go to the nine rounds that it went last time.

“It’ll motivate me and spur me on to hopefully have them applaud me,” said Mauricio Lara on fighting in front of Warrington’s fans in Leeds. “We’ll put on a great show, and I’ll get my hand raised.

“I hope he’s prepared in the correct way this time and knows how important I am as a fighter and how hard I am as a fighter,”  said Lara about his clash tonight against former IBF featherweight champion Warrington.

Lara has got a good point. The fight probably won’t go the distance tonight unless Warrington runs around the ring in pure survival mode, stinking the joint up for the full 12 rounds.

In what has to be construed as a bad sign, boxing fans are already whispering on social media that all Warrington has to do is go the 12 rounds, and he’ll have his hand raised.

In other words, the visiting fighter Lara has no chance of winning a decision in Leeds. I’ll be a night of home cooking, and Warrington will walk out of the ring, smile like the Cheshire cat, and will never fight Lara again. 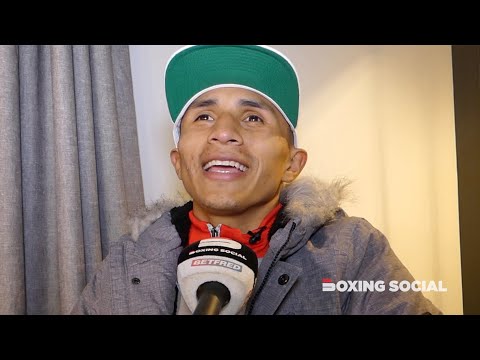