By Allan Fox: Workout video of Andy Ruiz Jr. has popped up on the Internet this week, showing the former IBF/WBA/WBO heavyweight champion looking much thinner he’s ever looking and doing deep knee bend after one week out of surgery.

Needless to say, it’s an incredible transformation for the Eddy Reynoso-trained Ruiz Jr. to lose that amount of weight in such a short period of time in a matter of three months.  How did Ruiz Jr. take that much weight off in just 3 months?

Unfortunately, when a person loses the kind of weight that Ruiz Jr. has lost in three months, you lose muscle along with it. Ruiz Jr. can’t afford to lose muscle because that’s what has given him the power to compete against giant heavyweights like the 6’6″Anthony Joshua.

Looking at the video, Ruiz appears to have lost muscle as well as lots of fat. Physically, Ruiz looks good, but it may not be helping him for his boxing career.

He’s found success being a chubby fighter, and it doesn’t make sense for him to be tinkering with that after 12 years in the pro game. Really, Ruiz could wreck his career.

Has Ruiz Jr. taken too much weight off?

Ruiz (34-2, 22 KOs) has lost 30 lbs, which is totally believable given how thin he looks. If that weight loss number is true, that will put his weight in the neighborhood of the 220s or low 230s. 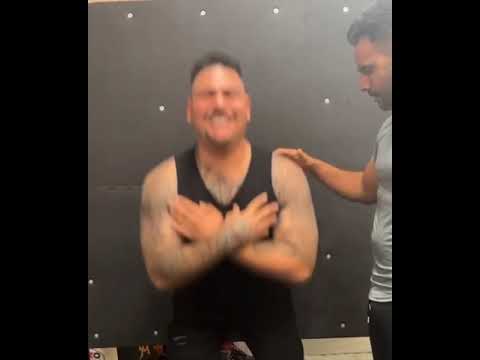 Against Arreola, Ruiz Jr. didn’t look like he’d improved since his two fights with Joshua. In fact, Ruiz’s power on his punches appeared weaker than they’d been when he was heavier.

More importantly, Ruiz’s punch resistance didn’t look nearly as good, as he was dropped in the second round by the 40-year-old Arreola. Also, you could see from watching the fight that Ruiz was clearly bothered by everything that Arreola was hitting him with.

This wasn’t the same Ruiz that used to walk through shots from his opponents and then nail them back. He appeared fragile from too much weight loss.

I think Ruiz Jr. looks considerably worse than he did before he began training with Reynoso and started this rapid weight loss program.

What kind of knee surgery did Ruiz Jr. have?

The question is, what kind of knee surgery did the 31-year-old Ruiz Jr. have for him to be doing deep knee bends so soon after going under the knife?

If you’ve ever had knee surgery, it’s physically impossible to jump back in the gym and start doing strenuous knee bends a week after the procedure. It’s not possible.

This begs the question, what kind of knee surgery did Ruiz Jr. have for him to back in the gym right away doing a physical exercise involving his legs? Right now, Ruiz Jr. looks like he’s ready to fight. When you can do knee bends the way Ruiz Jr. is doing in the video, you’re ready to fight.

Unless Ruiz Jr. had a minor knee surgery that didn’t involve cartilage removal, it’s difficult to fathom how he’s able to do knee bends so soon after surgery?

It doesn’t seem humanely possible for Ruiz Jr. to be doing the kinds of exercises he’s performing right out of surgery. Hopefully, Ruiz Jr. doesn’t hurt himself and end up needing additional surgery to repair what he’s done by getting back in the gym so quickly.

Tim Bradley: I hope Oscar Valdez gets knocked out »