How Many Know of the “other side” of Big Mouth Muhammad Ali?

By Ken Hissner: Just think if the bicycle of Cassius Clay was not stolen? He would not have taken up boxing for sure. He came from parents of a loving mother they called “Bird” and a not so nice sign painter father.

There have been half a dozen amateur boxing records of the then Cassius Clay with over 100 wins and half a dozen losses. He won the heavyweight Golden Gloves and AAU light heavyweight title at 178. In the Olympic Trials at heavyweight, he lost to New Jersey’s Percy Price but was allowed to compete at 178 and won the trials to compete in the 1960 Olympics.

Clay would go to Rome, Italy, and fortunately at 178 because the Italian heavyweight Francesco de Piccoli (who won Gold) was a southpaw. He was fortunate to go in at the lower weight.

Whether it was amateur Amos Johnson or pro Karl Mildenberger Ali would have problems with southpaws. As it turned out, he fought the southpaw Pole in the finals, who was Ziggy Pietrzykowski, and barely won gold. They would be reunited many years later at Ali’s “This Is Your Life” event.

Wanting the fans to come out in bunches to see the brash Clay, he took a role from wrestler Gorgeous George getting the fans to hate him even calling himself “The Greatest” and want to see him get beat. He even called many a round when he would finish his opponents like “Moore in Four!”

A Louisville group put together with the backing of Clay, who even with a Gold Medal couldn’t eat at a diner counter being black in Louisville, Kentucky. This writer remembered serving in the Army in Ft. Jackson, South Carolina, with four of us white guys from the north and one black guy from South Carolina attempting to get in a bar when they would not let the black guy in, so I said, “if he isn’t getting in neither are we” and left!

Turning pro, Clay would win his first nineteen fights before fighting champion Sonny Liston. Clay had struggles with Doug Jones and came off the canvas with Sonny Banks and Henry Cooper.

Rumors were the mob had Sonny and bet big on the brash Clay being a long shot. It was said in the dressing room a baseball bat was administered to Liston’s left arm, so the jab that knocked out the teeth of Bert Whitehurst in the first round would have little effect on Clay.

After six rounds, Liston had one eye closed and a bad left shoulder for obvious reasons and couldn’t come out for the seventh round of a fight that was even on the scorecards. Clay immediately announced he was a Muslim and called himself Cassius X, later to Muhammad Ali. It was Ring Magazine’s Fight of the Year! 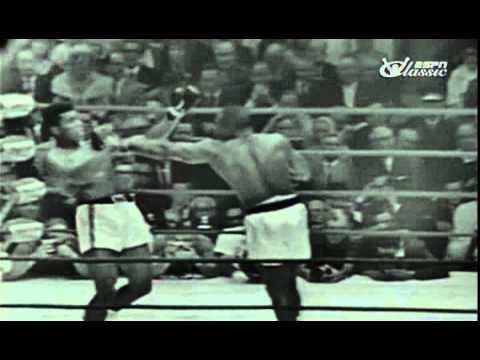 It would be fifteen months before there was a rematch with Liston. On the way to Lewiston, Maine, one of Liston’s people riding shotgun years later told this writer at Joe Frazier’s Gym, “we pulled up to a red light, and kids were pointing to Sonny in the backseat. I turned around, and he was sweating like a pig. I knew the fix was in!”

In that rematch, Liston did a poor job taking one of Ali’s “phantom” punches that only Ali’s trainer Angelo Dundee seemed to see connect while pulling back, landing on Liston’s jaw. He rolled around on the canvas after hitting it while former heavyweight champion “Jersey” Joe Walcott, who was also rumored to be controlled by the mob in his fighting days, didn’t know what to do before finally calling a halt after 2:12 of the first round. That was in November of 1965.

After Ali’s eighth title defense, he was drafted in 1967. While NFL quarterback Joe Namath of the New York Jets claimed, “I can’t go in the army I have bad knees,” while he was able to keep his profession but not Ali! It would be forty-three months before Ali was able to return to the ring when he got a New York license. Where were the Muslims in all of this time to help support him? He did speaking engagements at colleges and elsewhere to make ends meet.

After a pair of wins over Jerry Quarry and Oscar Bonavena, Ali met “Smokin” Joe Frazier in a fight that went down to the wire going into the fifteenth and final round when Ali got knocked down and lose his first fight in March of 1971. Lucky for Frazier, he didn’t meet Ali 43 months previously. It was Frazier going to the hospital after the fight, not Ali, if rumors were right.

Ali would go onto be the first heavyweight to win that title three times. This writer was told by legendary trainer Cus D’Amato it was he who pushed Ali into that third win defeating “Big” George Foreman to be the first to do it. Though seeing D’Amato at Ali’s Deer Lake camp in Pennsylvania, I would meet him and then active boxer Kevin Rooney in Scranton, PA, and invite myself to Catskill, New York, where they lived and met a fifteen-year-old Mike Tyson. We watched his soon-to-be manager Jim Jacob’s “Fight Films of the Century,” and Tyson loved watching heavyweight champion Jack Dempsey with no robe and no socks!

Ali’s boxing career ended in December of 1981, losing to Trevor Berbick in Nassau with a 56-5 and 37 stoppage career with one ill-advised loss by stoppage to the man he called “Peanut Head,” Larry Holmes. This writer saw Ali preparing for the bout with Holmes with a big belly sitting in a chair and asked, “why would you take this fight in the shape you are in?” He patted his belly and said, “I like my ice cream!” Another opponent he would have beat prime time to prime time!

In 1990 Ali was in Iraq when Saddam Hussein allowed him to bring back fifteen American hostages (not fourteen like Obama said) as told in my article “Was Muhammad Ali A Draft Dodger or a Hero?” If he had served in the military, he would have received high honors!

In the final days of entertainer Elvis Presley’s life, he visited Ali at his Deer Lake camp now called “Fighter’s Heaven.” My article “Two Kings: One of Rock n’Roll and Another of the Boxing Ring” explains this. Elvis had a martial arts background, as one could see when he was performing. Ali called him “one of the sweetest human beings I ever met!” Both owned a Stutz Bearcat automobile that this writer has a picture of Ali’s along with his third wife Veronica besides it in Deer Lake.

Wrapping things up, it was rumored Ali was so broke he sold the rights to his name for $50 million. He was a great humanitarian that most people didn’t know about. Boxing greats like Tyson and “Sugar” Ray Leonard idolized Ali, as did many!

When this writer wears one of my two Muhammad Ali shirts, I have fun going up to men saying, “you got a problem with the shirt?” Especially if they are black, do I get a big laugh. It happened recently, and I was told about how Ali and Billy Crystal got together in Israel and created a performing arts group that my most recent article (the ninth) entitled, When Muhammad Ali & Bill Crystal Partner the “Times of Israel!” In this one being the tenth article I’ve done on Ali, I hope fans and the not fans get to read the “other side” that many may not have known about this great man!