By Charles Brun: Chris Eubank Jr. says Billy Joe Saunders never suffered an eye injury that led to him being beaten by Saul Canelo Alvarez earlier this year on May 8h.

Eubank Jr. says Saunders (30-1, 14 KOs) “quit” because of a black eye that he suffered in the 8th, and he’s been missing in action ever since because of the “shame” of it all.

Chris (30-2, 22 KOs) maintains that if the former two-division world champion Billy Joe had really suffered a fractured orbital bone or eye socket, there would have been a doctor’s report and photos that would have been shown to the boxing public to verify his injury.

Since that failed to happen, Eubank Jr. concludes that Saunders was never injury, aside from a black eye and that he simply bottled it, losing his nerve when the going got tough.

The white flag went up from Saunders, and he quit on his stool after the eighth round ended.

“I don’t know,” said Eubank Jr. to iFL TV when asked if Billy Joe Saunders will ever fight again.”Listen, he [Billy Joe] took that fight [with Canelo Alvarez] because he wanted the money.

“He [Saunders] was the sacrificial lamb. So a fight with me is the same thing. You’re going to get a serious amount of money, so I would suspect that he would take that fight if the opportunity was there.

“Likewise, I’m not going to say no to that fight, even though he doesn’t have a world title. The history is there, and the demand from the public. That’s always going to be a fight of interest to me.

“Is he on my radar? Absolutely not,” said Eubank Jr. about a fight with Saunders. “But if there was an opportunity to make the fight, I’m always going to be interested.

“So, we’ll have to see what the future holds for that one,” Eubank Jr. said about Saunders.

We don’t know how long it will take for Billy Joe’s eye injury to heal. With Saunders’ complete silence since losing to Canelo on May 8th, there’s a possibility that he’s not going to return to the ring to resume his career.

At this point, the only way that Saunders might be lured back into the ring is if Eubank Jr’s promoter Kalle Sauerland waves some dough under his nose.

“That fight [Eubank Jr. vs. Saunders] as a promoter, I would be lying if I said I didn’t want to make that fight,” said promoter Kalle Sauerland.

“I think that fight does Wembley Stadium, I think it’s absolutely ginormous, and it’s huge because of the rivalry. I think a domestic rivalry always trumps a world title.

“We all know Froch-Groves 2 was for belts, but if there had been the Mickey Mouse belt on the line, I don’t think anyone would have not bought a ticket.

“From my side, I wish Billy Joe a good recovery, and we’ll see down the line.

“We can work out a deal there, but right now, he’s taking time out from the sport. One has to respect that,” said Sauerland about the injured Saunders.

It isn’t easy to imagine there is enough interest from boxing fans to fill the 80,000 seats Wembley Stadium for the rematch between Eubank Jr. and Saunders.

It will help if Eubank Jr. looks sensational in his next fight against Sven Elbir on October 2nd.

If Eubank Jr. destroys the Elbir (18-1, 14 KOs), that will get fans talking about him once again, as his career has fallen apart in the last five years due to inactivity and weak match-making.

What you don’t need is for Sauerland to book Wembley Stadium for the Eubank Jr. vs. Saunders 2 rematch, and then only 8,000 fans purchase tickets.

“Just to put a little more meat on that bone,” Said Eubank Jr. about Saunders. “There is NO recovery. The guy [Billy Joe] is perfectly fine.

“He quit, he got a black eye, and he didn’t want anymore with Canelo. There was no smashed orbital bone. There was no broken eye socket.

“He swallowed it and gave up, and that’s why he’s been MIA for the last however many months because of the shame for what he did.

“If he ever grows a pair and wants to get back in the ring, we’re here. So we’ll see what happens. There’s nothing to hear,” said Eubank Jr. when asked how he knows that Saunders wasn’t injured during the Canelo fight. 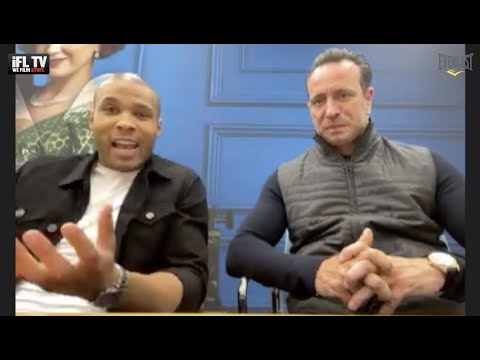 “The guy was driving around in his car a week later with sunglasses on. If you’ve broken your eye, that doesn’t happen; it’s as simple as that.

“Some people actually believe he went through these injuries that he actually claims.

“We’re not robots. We’re not sheep. We can actually put two and two together,” said Eubank Jr. on his belief that Saunders faked his eye injury.

Saunders’ eye did look messed up after the eighth round in the Canelo fight. Who knows why Billy Joe chose not to show the boxing public photos of his eye after his surgery.

That would have been the perfect time to show the fans the proof that they wanted to verify Saunders was hurt.

How Many Know of the “other side” of Big Mouth Muhammad Ali? »