By Allan Fox: Roy Jones  Jr. agrees with Anthony Joshua’s promoter Eddie Hearn with his belief that newly crowned IBF/WBA/WBO heavyweight champion Oleksandr Usyk WON’T be capable of improving for the rematch with AJ next February.

Matchroom Boxing promoter Hearn and commentator Jones Jr. believe Usyk (19-0, 13 KOs) fought as well as he could in defeating Joshua (24-2, 22 KOs) by a 12 round unanimous decision last Saturday night at the Tottenham Hotspurs Stadium in London.

As far as Hearn and Jones are concerned, this is as good as it gets for the former undisputed cruiserweight champion Usyk. He won’t improve at all for the rematch with Joshua, which Hearn is saying will take place in the UK next February.

The ONLY one that can improve is Joshua for the rematch, and it’s up to him to prove that he can make enough changes to his game to defeat the 2012 Olympic gold medalist Usyk.

If Joshua follows Hearn’s directions, he’ll come out on fire for the rematch and go all-out from the opening bell looking to stop Usyk.

Joshua will need to decide if he feels that’s the right approach for him to start fast against Usyk, given that he had a bad experience against Andy Ruiz Jr. when he fought at a fast pace.

“Eddie Hearn is very right there,” said Roy Jones Jr. to iFL TV when told that Hearn said that Usyk CAN’T improve for the rematch with Joshua.

“You can always get better, but you’ve got to go to a different place to get better. Usyk became cruiserweight champion. How much better is he going to get?

“If he’s [Usyk] not maxed out now, how is he going to get better? He’s already an undisputed cruiserweight champ.

“You would figure that people say that when you win a world title, you become 60% better. Well, he already did that four times.

“What is he going to do differently? But he’s [Hearn] right about that. That’s the best Usyk you’re going to see,” said Jones Jr.

It sounds like wishful thinking on the part of Hearn and Jones in predicting Usyk won’t improve for the rematch with Joshua. He may not need to improve to beat Joshua a second time because the chances of AJ making huge improvements at his age are slim.

Usyk’s defense will make it hard for Joshua to land his power shots no matter how aggressive he fights in the rematch. If anything, Usyk will be better equipped to stay out of the way of Joshua’s shots after sharing the ring with him.

Also, Usyk knows that Joshua will gas in the championship rounds as he did last night, and he might press for the knockout.

Joshua should have started fast against Usyk

“The main thing Anthony did wrong is that when you’re fighting a guy that is smaller coming up in weight, you must let him know that tonight, you’re the bully,” said Roy on what mistakes Joshua made in his loss to Usyk.

“You cannot allow that to happen with a small man. They [Joshua and Usyk] fought a little bit differently than I expected them to.

“That’s why I said if Joshua fights the right way, Usyk isn’t going to be able to do anything until later on.

“So make him keep fighting, and then, later on, you try and change the game up a little bit. But Joshua came out and gave Usyk respect right away.

“Usyk basically controlled the center of the ring, and that’s why Usyk won the first three rounds. I was surprised.

“I know the late rounds, Usyk was going to win because of his knowledge and his IQ, But I wasn’t expecting Joshua to give him the first three rounds.

“You can’t do that.  If you let a little man win the first three rounds, then he feels like, ‘I got this easy. I’m in the game.’ You let him in the game, though.

“Do you understand that you can’t let a little man in the game.  So, I never thought Joshua would allow Usyk to get in the game that quick,” said Jones Jr.

There likely was some worry on Joshua’s part that if he had started quickly against Usyk, he might have run out of gas. Also, Usyk’s reflexes and timing were too much for Joshua in the early going last night.

Had Joshua started fast the way Roy wished, he would have been countered and hurt by a shot that he didn’t see coming from Usyk. That’s what happened to Joshua in his loss to Andy Ruiz Jr. in 2019.

Joshua started fast when Ruiz was fresh and was caught by a big left hook that he didn’t see coming.

Joshua must take the immediate rematch

“If I were Joshua, I would take an immediate rematch,” said Jones in believing that AJ should face Usyk right away.

“Even if it were six months from now, I would still take it because Joshua can win the rematch.

“Matter of fact, if you did the right thing, you would have controlled the fight. So, it’s that you didn’t start controlling the fight early enough.

“There are a few adjustments he can make. A lot of it is mental,” said Roy when asked what adjustments Joshua can make for the rematch with Usyk.

“A little bit of it is boxing, but it’s more mental than physical. Some adjustments have to be made.

“He just needs to hang out with a killer. When I say, ‘Killer,’ I  mean killer inside the boxing ring, not outside.

“So, he’s got to get that killer mentality,” said Jones about what’s missing with Joshua.

“So many people have lost that art because they start chasing the money, and they forget the art of, ‘I’m going to try until I die,'” said Jones Jr.

For the sake of Joshua’s reputation, he must take the immediate rematch with Usyk because the defeat that he suffered will leave a lasting impression.

The only way for Joshua to erase the image of him losing to Usyk is by fighting him right away in a rematch. If Joshua loses again to Usyk, it’s game over for all intents and purposes.

On the positive side, Joshua will be a wealthy man with a vast fortune from his nine-year professional career.

Roy says NO to Fury vs. Usyk

“But it’s the most boring thing you’ll ever want to watch because no one can’t knock anybody out.

“It’s going to be technical because it’s high-class boxing; it’s next-level boxing. But in boxing, we want to see excitement and knockouts.

“With these two [Fury and Usyk], we got to see a real chess match. For boxing fans right now, that’s not what we need.

“But if you put Fury and Joshua together, the ordinary boxing fan are starving for action right now, and that’s not the fight that we’re going to get a lot of action.

“So, we want to keep that from happening in any way possible. For me, that’s [Fury vs. Usyk], one of the best fights you’re going to see because it’s knowledge against knowledge.

“Usually, the skilled big man beats the skilled little man, but that’s what that fight is.

“So that’s a fight that I would like to see myself in, but for the way boxing is going right now, it’s not the best fight for boxing right now.

If Fury beats Deontay Wilder in their trilogy match on October 9th and Usyk defeats Joshua in their rematch next February, there will be too much pressure on winners not to fight.

Usyk and Fury won’t care if the boxing public views them as boring to watch. They’re going to want to fight for the undisputed championship.

You can argue that Fury has prematurely aged himself with poor eating habits and his tendency to balloon up in weight between fights.

“With that being said, you have to love the fact that those two are rising to the top,” said Jones. “You hope the athleticism and the punching power will come into play because the better boxer ain’t always going to win.

“We want to keep it action-packed in the heavyweight division right now.

“We have too many good hard-hitting heavyweights to match against these two master boxers to make interesting fights to worry about the two fighting to see who the better is between the two right now.

“Let’s get the most out of this first, and if they beat up and clear out everything else, then we let them fight because they’ve cleared the garden.

“All the trash has been weeded out. If they weed out the trash, then we’ll see those two go at it,” said Jones about wanting Usyk and Fury to clear out the other heavyweight competition before fighting.

The chances are high that if Usyk and Fury were to let their fight marinate, one or both of them would eventually lose to someone.

With Fury is enjoying the many millions that he’s made from his fights against Deontay Wilder, his physical skills are deteriorating.

By looking at Fury’s physique, you can tell that he’s not the same fighter that beat Wilder a year and a half ago.

Moreover, the talk of Fury getting beaten up by his sparring partners Jared Anderson and Efe Ajagba confirms that he’s lost the hunger needed to be an elite fighter. 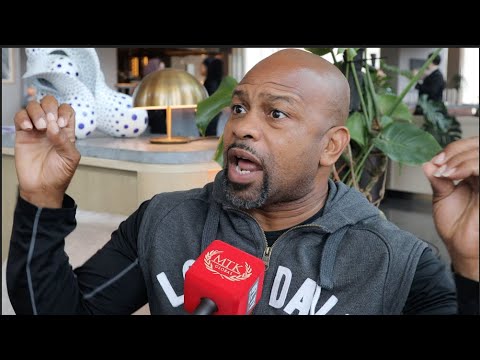