Santa Cruz is arguably a step too far for Wood or Conlan at this point, and it could be a real massacre.

Conlan and Wood are decent fringe-level featherweights, but they’re not top 10 talents in Charles Brun’s estimation.

Wood is currently the WBA secondary featherweight champion, but only because he fought a weak belt-holder in Can Xu. Santa Cruz will make easy work of either of these two guys.

Wood vs. Conlan has until September 27th to try and bang out a deal. If no deal by then, a purse bid will take place on that date. This is a good domestic fight for UK boxing fans, but it won’t do much for the fans outside that area.

The Irish fighter Conlan, 29, has been totally unimpressive since turning professional in 2017 after competing in the 2016 Olympics for Ireland. Top Rank has done an excellent job of carefully matching Conlan to keep him from getting beaten.

Conlan likely would have lost many times over by this point if Top Rank had matched him against Emanuel Navarrete, Gary Russell Jr, Leo Santa Cruz, Rey Vargas, and Mark Magsayo, to name just a few.

Wood vs. Conlan is basically a toss-up fight as both guys are evenly matched in terms of power, size, and boxing skills.

This means that former WBA secondary featherweight champion Xu has opted not to use the rematch clause to force a second fight with Wood, 33, after losing to him by a 12th round knockout on July 31st. 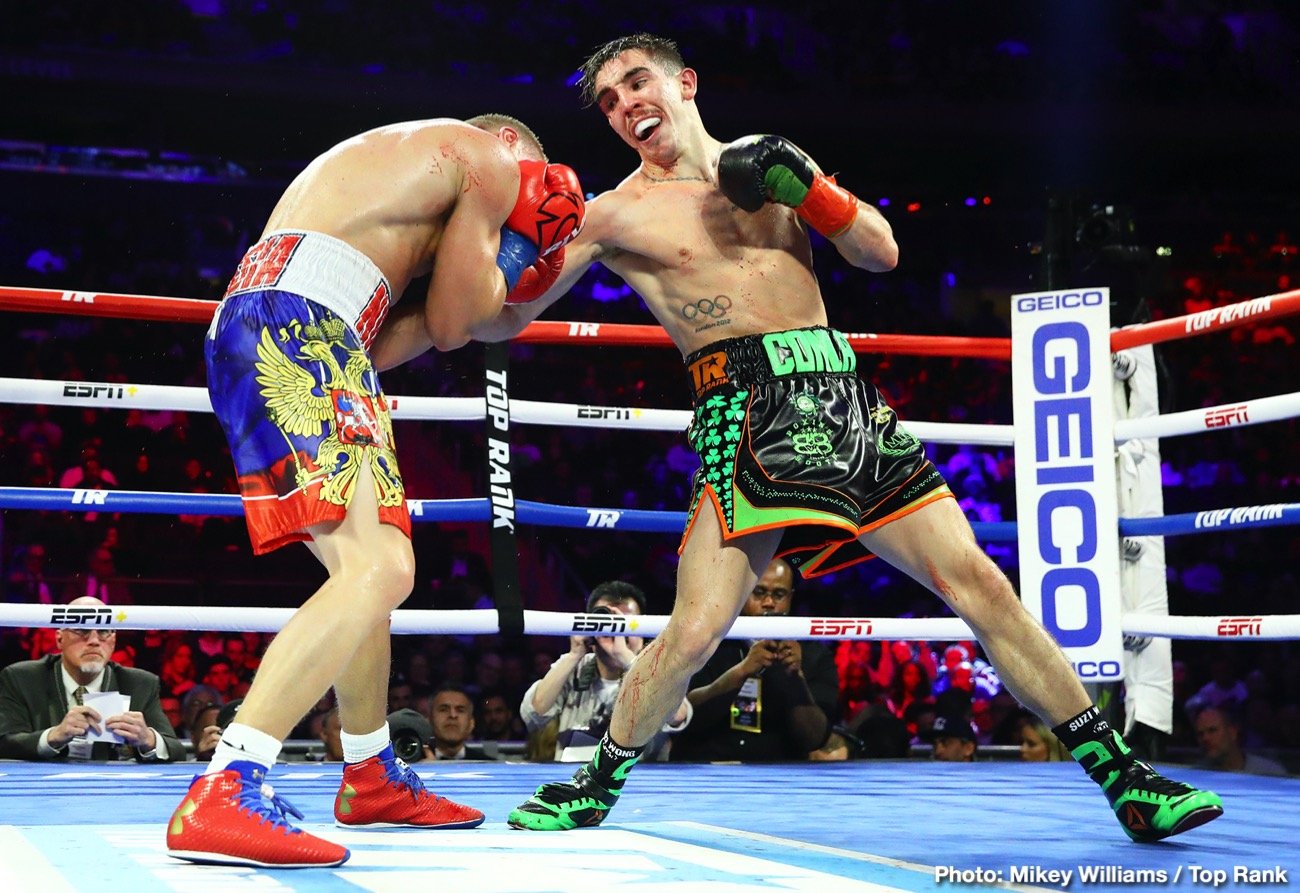 That obviously makes Wood’s promoter Eddie Hearn happy, as he was counting on Xu not forcing the rematch after the way he lost.

However, Hearn hoped that the World Boxing Association would either strip Santa Cruz or his ‘Super World’ title and elevate Wood to that spot or order the two to fight.

Instead, Hearn gets neither of those things, as the WBA has ordered Wood to fight the interim 126-lb champion Conlan (16-0, 8 KOs) in what could be a difficult fight for Leigh.

The things that Wood was able to employ against the shorter-armed Can Xu in his last fight, straight-arming him all night, he won’t be able to do that against Conlan.

Straight-arming is when a fighter holds his lead arm far out in front of them, and they use it as a stick to keep their opponents from getting close enough to land by pushing them or holding against their head.

Of course, it’s illegal, but Wood was permitted to use this tactic against Xu the entire fight without the referee Marcus McDonnell penalizing or disqualifying him.

It would have been interesting to see if Wood would have been allowed to use that tactic if he were fighting in the U.S. I’d say that’s a big NO. He might have gotten away with it for one round, but then the referee would have stepped in and started giving warnings for the tactic by Wood.

Thus far, Conlan’s best wins have come against these fighters:

Conlan’s one-sided 10 round unanimous victory over the Russian Nikitin in December 2019 avenged his loss to him in the 2016 Olympics.

He felt that he deserved the win over Nikitin in the Olympics, but in re-watching that fight, Conlan clearly lost and was a poor loser.

“The WBA ordered a fight between featherweight champ Leigh Wood and interim titleholder Michael Conlan; president Gilberto Mendoza told ESPN. If no deal is reached by Sept. 27, a purse bid will be ordered. Great action fight. The winner will be ordered to fight Leo Santa Cruz. Santa Cruz’s last two fights were contested at 130, but he told ESPN he plans to return to 126 pounds in December,” said @MikeCoppinger.

Juan Francisco Estrada vs. Roman “Chocolatito” Gonzalez in the works for Oct.16th on Dazn »