Of those three, Thurman NEEDS to defeat Ugas to capture his WBA 147-lb belt to force Errol Spence Jr to fight him. That’s the fight that Thurman wants the most, but he needs to defeat Ugas to get his hands on his belt to lure Spence properly. Without that belt, Thurman will likely be ignored by Spence forever.

All three of those fighters interest Thurman and he says he would need to sit down and think about which one to take.

WBA welterweight champion Ugas (26-4, 12 KOs) could have been Thurman’s next opponent if he’d wanted the fight but opted not to take it.

As such, Ugas will be defending his WBA title against little-known 140-lb contender Fabian Maidana on the undercard of Manny Pacquiao vs. Errol Spence Jr fight on August 21st.

This is arguably a stay-busy fight for Ugas in defending against Maidana, and he should be able to get through it without suffering a scratch.

Thurman, who will be turning 33-years-old in November, says he would like to beat IBF/WBA/WBC 154-lb champion Jermell so he could use the victory as a method for him to get a fight against Errol Spence Jr., Keith feels that if he beats Charlo, he could hold the belts and force Spence to fight him when he soon moves up to 154.

However, Thurman realizes that he would need to defend those belts against the contenders at junior middleweight, and he doesn’t seem nearly excited about doing that.

Currently, Thurman (29-1, 22 KOs) needs an opponent for his ‘get-back fight after being out of the ring for over two years since his loss to Manny Pacquiao in July 2019.

Thurman’s advancing age might make a tune-up a luxury that he cannot afford at this juncture of his career. He needs to snatch up the WBA 147-lb belt from Ugas in a hurry if he wants to force Spence to fight him.

Although Thurman has been calling out Spence, he doesn’t have a title to force him to make the fight.

“It’s a good fight. Ugas is a respectable champion, and he’s got a great fighting style,” said Keith Thurman to Thaboxingvoice when asked about his thoughts on fighting Yordenis Ugas.

“He’s Cuban; he put in a great performance against Shawn Porter. He was hesitant, he was walking Porter down and wasn’t letting hands, and I think he let the judges take that from him.

“You got to be in the position where the judges take it. It wasn’t something where he fully, fully, fully deserved to have his hand raised, and they didn’t raise it. I think it was a case of him [Ugas] leaving a little bit of food on the table, and he didn’t gobble up that meal, and he didn’t take that belt from the champion [Porter].

‘You’re the champion, but not today, not anymore. It’s my title,'” said Thurman about his opinion that Ugas didn’t do enough to earn a win over Porter despite many boxing fans believing he clearly deserved the win.

“I think it’s a great fight in the welterweight division for me to fight against Ugas. I haven’t heard a date. I’ve heard rumors involving Ugas? Is it Ugas – Thurman? Time will tell,” said Thurman sounding a little disengaged from the process and ambivalent.

Ugas SHOULD be the fight that Thurman takes next in October or November, but it’s questionable whether he will. It depends on how motivated Thurman is to get the Spence fight. If he wants to earn a match with Spence, it’s imperative that he beat Ugas to use his WBA belt as bait.

“I’m here for the love of the sport. I love the credentials I have, and I want to further my credentials, and that fight entices me as far as lining up and furthering my credentials.

“Worst case scenario, Thurman falls a little short [against Jermell], then I hop back in the welterweight division.

“I’ve always had small aspirations to move up [to 154], but I always thought a little bit more at the 34, 35 age bracket, maybe even in the last chapter of 36 and beyond.

“So it’s never been in the forefront of my mind, yet it’s always been a possible, maybe later kind of issue. But too many belts, too much for the history books. I might have to sign [to fight Jermell Charlo],” said Thurman.

If Jermell had an open schedule to face Thurman, it would be an excellent fight while it lasted.

Unfortunately, Jermell’s schedule is all booked up until 2023, and Thurman can’t afford to sit on the sidelines playing his flute for another year.

He’s already thrown away roughly three years since his fight with Danny Garcia by not being active enough.

“It would be easy to take; I’d had to think about it, but Tank [Davis] seems exciting,” said Thurman when asked if he would be interested in fighting Gervonta ‘Tank’ Davis Jamal James, or Jermell Charlo. 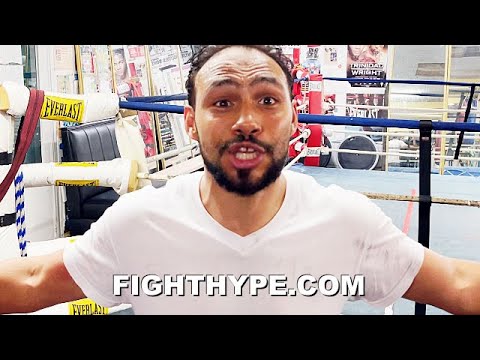 “It’s right at welterweight, and I get to do me; he gets to try and make history for him moving up,” continued Thurman about fighting Tank Davis.

“In a fantasy world, I would have to say that it would be a toss-up between those two great pay-per-view fights [Tank Davis and Jermell Charlo] over a simple welterweight fight [WBA ‘regular’ 147-lb champion Jamal James] that I don’t feel would bring the same level of excitement and the complexities of the match-ups, right?

“You’ve got the complexity of a little man [Gervonta Davis] moving into the welterweight division and me moving up [to 154 to take on Jermell Charlo],” said Thurman.

“I just like the dynamics of the complexities of those match-ups,” Thurman continued. “I’d really have to ponder, sit down and go over everything and look at which one would get more attention and then go from there,” said Thurman about the possibility of him fighting Tank Davis or Jermell Charlo.

It sounds like a delusional pipe dream that Thurman has about beating Jermell and using the victory to entice Spence to fight him.

First of all, Jermell will be busy for a long, long time with his next three fights against Bakhram Murtazaliev, Brian Castano, and Erickson Lubin.

Secondly, if Thurman fights Jermell, he’ll likely lose because he’s a bigger, stronger guy performing at a higher level than what we’ve seen from ‘One Time’ in his last couple of fights.

Believe me; it’ll be a mistake for Thurman to fight Jermell because the result will likely be bad for him.