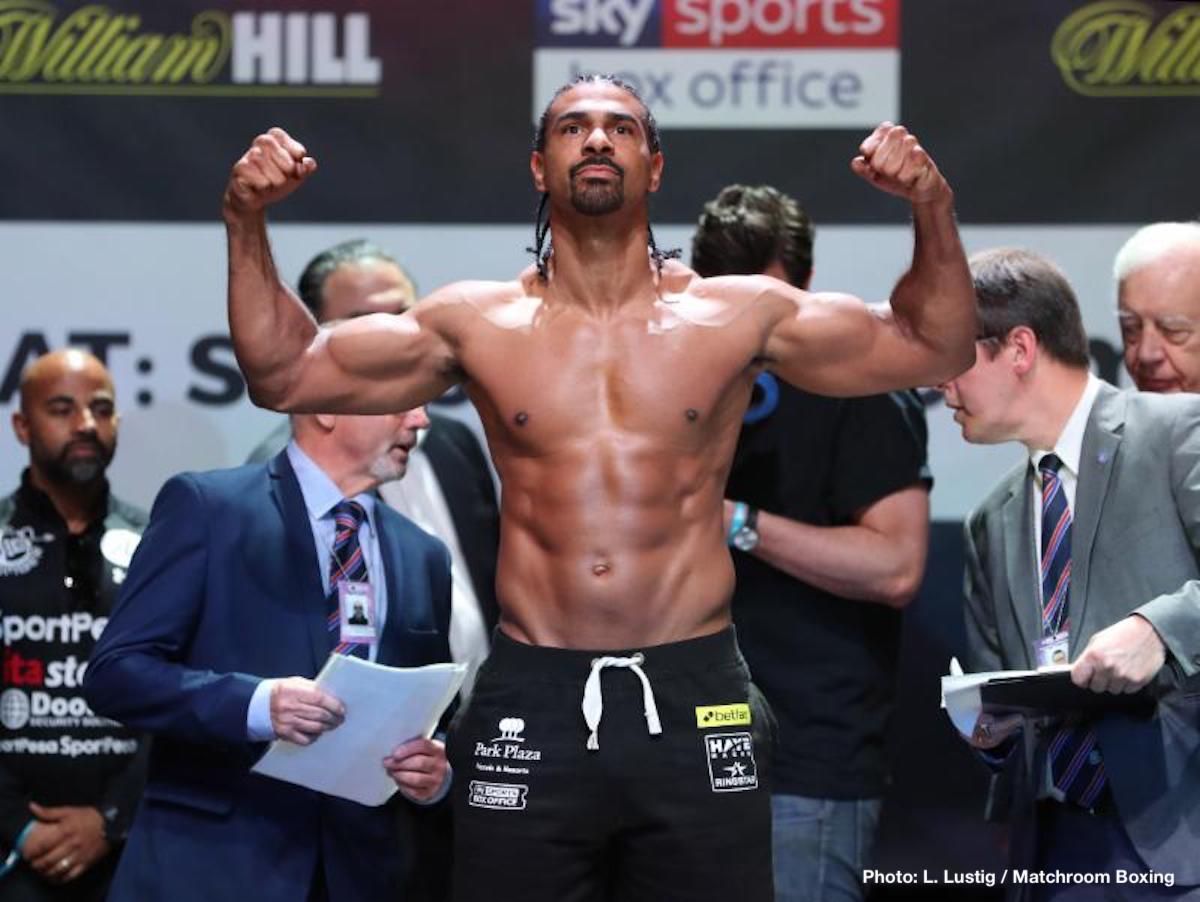 By Charles Brun: David Haye came out with a statement on Thursday to explain why he’s coming out of retirement to fight entrepreneur Joe Fournier in an eight-round professionally sanctioned fight on September 11th on the Triller PPV card at the Staples Center in Los Angeles, California.

The 40-year-old Haye (28-4, 26 KOs) insists that he’s NOT making a comeback to the sport of boxing, which he hasn’t competed in since retiring three years ago in 2018 following a fifth round stoppage loss to Tony Bellew.

Haye maintains that he wants to teach the 38-year-old Fournier that there are “levels” to the sport, and he plans on showing “Joe ‘The Billionaire’ Fournier” that when they fight on September 11th.

It’s too bad that Haye doesn’t want to face a top-tier boxer instead of Fournier, as he’s getting royally dumped on by boxing fans critical of his motives for making this one-off fight. They see this as a money grab on Haye’s part and feel that it further cheapens the sport.

Haye could do much better than this if he were to pick at least someone from the sport that had enjoyed a measure of success in the past. Even someone like Enzo Maccarinelli would be preferable to Haye fighting Fournier and might attract a little interest.

Before injuries wrecked Haye’s promising career, he was an excellent cruiserweight and a good heavyweight. He had wins over the following fighters during his long 16-year professional career:

In November 2009, Haye defeated then WBA heavyweight champion Nicolai Value by a highly controversial 12 round majority decision to capture a belt.

During the build-up to that fight, it was off-putting how Haye criticized Value constantly, saying stuff about the big Russian heavyweight that came across to some fans as cruel and mean-spirited.

It was disturbing to listen to some of the things that Haye had to say about Valuev during the run-up to that fight. Valuev appeared to do more than enough to rate the victory during the actual fight, yet Haye was given the win. Interestingly, Valuev never fought again after that fight despite still being at the top of his game.

After wins over beatable heavyweights John Ruiz, Derek Chisora, and Audley Harrison, Haye battled IBF/IBO champion Wladimir Klitschko in a unification bout in July 2011, and he was easily defeated by an uncompetitive 12 round decision.

Haye was too small, too weak, and too limited to compete with Klitschko. You can argue the only reason Wladimir didn’t knock Haye out is that he was fighting the entire 12 round fight cautiously. Had it been Wladimir’s brother Vitali fighting Haye, he almost surely would have knocked him out.

Haye vs. Fournier is part of the Oscar De La Hoya vs. Vitor Belfort card on Triller pay-per-view on September 11th. ‘The Golden Boy’ De La Hoya (39-6, 30 KOs) is coming out of retirement at age 48 to fight a former UFC champion Belfort, who is 44-years-old. The last win for Belfort in the MMA competition was way back in 2015, which obviously a long time ago.

It’s believed that De La Hoya’s reasons for choosing Belfort as his opponent are two-fold. First off, Oscar wants to make sure he doesn’t get beaten, and the chances of that happening are low, given that he’s facing an old MMA guy who doesn’t come from a boxing background.

Secondly, selecting Belfort will help De La Hoya tap into the huge MMA market of fans that follow the sport, many of which would be more open to ordering the De La Hoya-Belfort fight on Triller PPV.