By William Lloyd: Joshua Buatsi (14-0, 12 KOs) says he’s going to take advantage of any vulnerability that he spots from his opponent Ricards Bolotniks (18-5-1, 8 KOs) by going for the knockout this Saturday night, August 14th, at the Matchroom HQ in Brentwood, Essex.

The 2016 Olympian Buatsi, 28, is headlining against #3 WBA Bolotniks in what could be his final fight before challenging for the world title against WBA light heavyweight champion Dmitry Bivol.

Buatsi’s promoter Eddie Hearn believes he’s ready to defeat Bivol (18-0, 11 KOs), who looked beatable in his last fight against Craig Richards on May 1st, winning a very close 12 round decision.

It’s possible that Buatsi isn’t the fighter that Hearn thought he would be when he signed him to a contract after the 2016 Olympics. Although Buatsi does have power, he performs unevenly, like a car that isn’t firing on all eight cylinders.

Hearn isn’t helping Buatsi by feeding him fodder-level opposition, as he’s been prolonging the inevitable decision, he must make soon on whether to cut his losses and move on or keep him around, hoping he’ll pan out one day.

This is an important fight for Buatsi, as he can’t afford another unimpressive performance like the one he put in against Marko Calic last October. Buatsi looked terrible in that fight, showing that he was light years away from the top-level fighters Artur Beterbiev and Bivol. 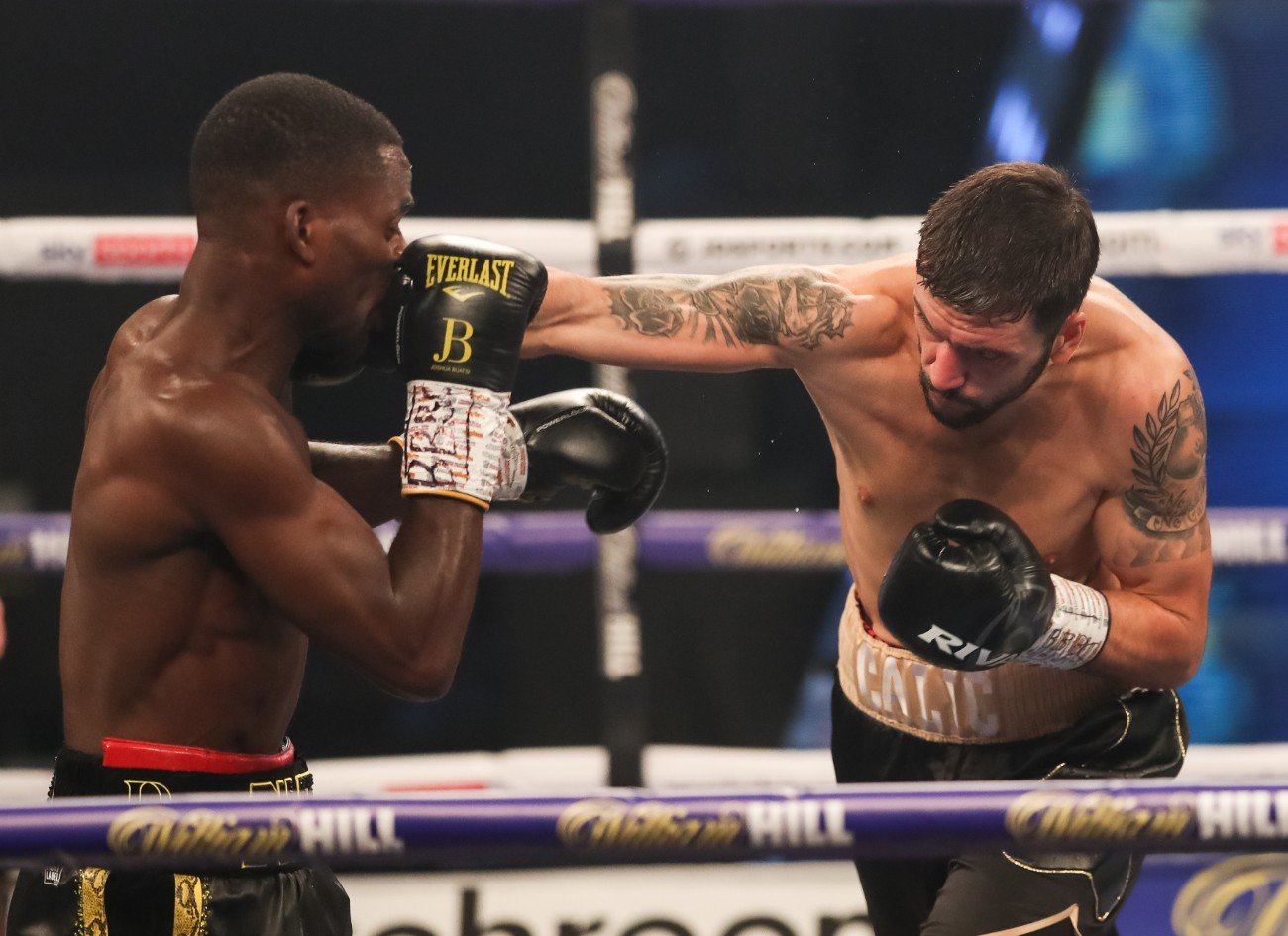 Matchroom Boxing promoter Eddie Hearn eased Buatsi from fighting quality opposition after that poor performance against Calic by feeding him a soft opponent in Daniel Blenda Dos Santos in his last fight in May. He responded well by destroying him in four rounds.

But we’re going to see whether Buatsi is ready for a quality fighter in Bolotniks, who is a step below the level of Beterbiev and Bivol.

If Buatsi struggles against Bolotniks, Hearn will need to ease off his plans to put him in with Bivol. That would be a bad idea.

“We can find out [how good Buatsi is]. These are the best nights because last time out, Buatsi boxed Dos Santos, he was 16-0, and we all knew he was going to knock him out, and he did,” said Eddie Hearn to BMBEntertainment.

“Now you go, ‘alright, let’s see,’ because if Buatsi is not as good as we think he is, and if he’s not as tough as we might think he is, he’ll get beat.

“I keep saying in interviews, he’s [Buatsi] is fighting here, and then you’ve got Bivol and [Artur] Beterbiev. You need someone here [a step below elite-level]. Bolotniks is the perfect guy.

“He’s absolutely tough as nails; he can punch, he won’t stop coming forward. I think Buatsi – Bolotniks is the fight of the [Matchroom] Fight Camp, and I’m looking forward to it on Saturday,” said Hearn.

Buatsi vows to KO Bolotnik if he sees weakness

“The Santos fight went four rounds. I prepared for ten, and I can’t complain,” said Buatsi to Matchroom Boxing. “Yeah, I think having all the [high] rankings with the governing bodies is good.

“It’s [Bolotniks] is a good step-up fight on paper, and people have been calling for fights like this, so here we have it, and it’s not an opponent that nobody knows.

“This is a guy that, as we said, is ranked by three governing bodies in the top 10. So, he’s done well to get here, so on August 14th, we find out.

“If it’s one to twelve, one to ten, one to eight, six, five, whatever it is, I say to people; I’ll be present every round. So I make sure every round I’m there.

“Always the aim is to win, but like I always say, if I sense any vulnerability from my opponent Bolotniks, it’s game over, I’ll take him out, man,” said Buatsi.

“August 14th, the main event, and I’m putting it all on the line. My biggest motivation right now is Bolotniks. When I’m lying in bed, I’m thinking, ‘This guy is working hard. So let me get up and put the roadwork in, work hard and come to the gym.

“There are so many ideas that I have, and sometimes it hurts me that I can’t do them straight away.

“When the time comes, I’ll be able to do a lot of the things that I want to do that will benefit the people around me. It’s not just about benefiting me,”  Buatsi said.

Buatsi should jump on Bolotniks if he spots weakness during the fight, considering this is a guy that he doesn’t want to leave around for the full 12. With Bolotniks’ heavy hands, he’ll do damage to Buatsi the longer fight goes on.

The last thing Buatsi needs is to be still battling Bolotniks in the later rounds because he’ll be giving him the chance of landing something big to score a knockout.

Dmitry Bivol next for Buatsi

“I want to talk about the Bivol vs. Richards fight,” Buatsi said. “I’m laughing because I still haven’t watched it, and I said I was going to watch it after my last fight.

“Maybe after this fight, I’ll probably watch the Bivol vs. Richards fight. For now, I’m not watching Bivol-Richards.

“I’m watching what I can do to improve, and if we get this fight over the line, it’s not a fight that I would shy away from,” said Buatsi about wanting to challenge for the 175-lb title against WBA light heavyweight champion Dmitry Bivol.

“Bolotnik, what I know if him is, he’s a good fighter, he’s a tough fighter,” Buatsi said. “I know he’s up for the fight. I know he won the Golden Contract.

“He’s a tough guy; I know he’s going to come and fight. That’s what I do know about him, and he’s up for the fight, which I think is good because that’ll bring the best out of me as well.

“If he’s there to fight, we fight, we box, and we do what we have to do. But as we’ve always said to people, I do what I have to do to win. So that’s the mindset that I have going in,” said Buatsi.

It’s good to get it over with and have Buatsi dive into the deep end against Bivol next, as the timing is perfect. Bivol looked vulnerable in his last fight against Craig Richards and perhaps didn’t get any better than this for Buatsi.

If Bivol gets active with his career again and can regain the form he’s had before the pandemic sidelined him, Buatsi will likely have little chance of beating him. Bivol is too technically solid for Buatsi to beat him when he’s at his best.

Gallagher: Buatsi should be further ahead with his career

“I’m interested to see what happens when he has a big test because it’s largely been stacked in his favor so far, but I definitely think he’s a good fighter,” said trainer Joe Gallagher to DAZN.

“One thing I will say about Josh is that I do think he should be a bit further ahead in his career.

“I know there was quite a gap after the Olympics because he was getting on with some studying before he turned pro, but you’d expect him to be further along now we’re approaching the next cycle of Olympians turning over.

“That’s usually the pattern,” said Gallagher in pointing out that Buatsi has been brought along a little too slowly by his Matchroom promoters.

It’s pretty obvious why Hearn has been holding back with Buatsi, not punishing him ahead against the elite fighters at 175. He obviously sees weakness in Buatsi that is causing him to hesitate to throw him in with the sharks in the division.

At 28, this is probably as it gets for Buatsi. You’re not going to get a better fighter than he is now by waiting around two to three years, hoping he’ll improve.

Most fighters are as good as they’ll ever be at 28, and I think Hearn probably wasted a couple of years by not having Buatsi fight for a world title in 2019.

Pacquiao: The only danger with Ugas is the change of stance »