By Matt Lieberman: Undisputed lightweight champion Teofimo Lopez looks totally shredded as he heads into his title defense this Saturday night, June 19th, on Triller PPV against the confident George Kambosos Jr at the LoanDepot Park in Miami.

You can tell from looking at Teofimo, 23, he’s taking the Australian fighter Kambosos Jr seriously, even though most boxing fans are counting him out.

Teofimo (16-0, 12 KOs) has put in the work to get ready for his mandated defense against his upset-minded IBF mandatory Kambosos Jr (19-0, 10 KOs) in their main event clash.

The fight that Teofimo really wants is against WBC lightweight champion Devin Haney, who he hopes to fight next on October 2nd.

If everything goes smoothly for Teofimo on Saturday, Top Rank will sit down with Haney’s promoters at Matchroom Boxing to hammer out a deal.

“I don’t think it’s true that he earned it in the ring,” Teofimo told DAZN News about Haney’s WBC 135-lb title. “It’s something that he got elevated and went up one and got his regular belt via email. That’s why I call him the email champion.”

“My goal is I got to focus on June 19th against Kambosos,” Teofimo said. “We get the job done, and then we can make that fight (with Devin Haney) happen.

“We can get the ball rolling on that. My goal is to really not just beat him [Haney] convincingly but to knock his head off,” said Teofimo in doing a bit of name-dropping to get fans interested in his fight with Kambosos Jr by mentioning a potential clash against Haney.

We’ll have to see if Top Rank can set up the Teofimo-Haney fight next for October 2nd. Bob Arum sounded skeptical about his chances of making the fight happen between Teofimo and Haney for October.

Arum thinks there’s not enough time to hammer out a deal between Teofimo and the Matchroom Boxing promoted Haney (26-0, 15 KOs) in time for the two to meet on October 2nd.

Bob prefers to schedule a fight between Teofimo and Vasily Lomachenko or Jose Pedraza, both of which he promotes. 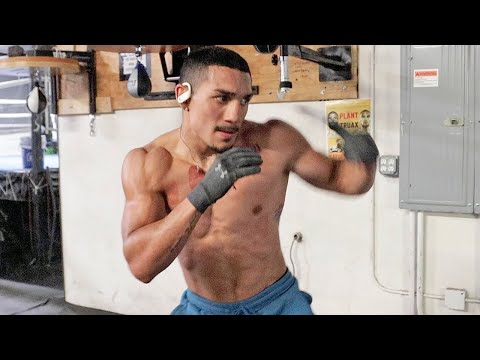 “What you see on those pads is real. He’s not a pad fighter; that’s the consistency you get, said Kambosos Jr’s sparring partner Adrian Sosa to Fighthub. “What you see in sparring is the speed, the power, the accuracy, the range; everything is on point.”

Kambosos claims that his sparring partner Sosa has better power than Teofimo, which, if true, is impressive. With that said, at least Kambosos Jr won’t be able to say that he wasn’t adequately prepared for Teofimo’s power if he gets knocked out on Saturday.


« Shakur Stevenson vowing to perform better in his next fight

Anthony Joshua vs. Oleksandr Usyk will have rematch clause »